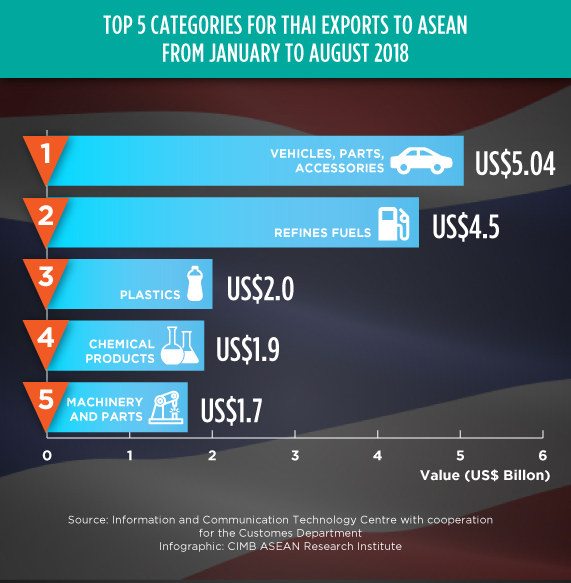 ASEAN is Thailand’s biggest export market especially for Thai auto parts
(8 October 2018) Thailand’s Department of Foreign Trade reported that vehicles, auto parts and accessories were the highest exports to ASEAN countries in the first eight months of 2018, with exports valued at US$5 billion. The top five exports from Thailand to the region came from the auto, fuels, plastics, chemical products and machinery and parts sectors. The department’s director Adul Chotinisakorn stated that ASEAN is now Thailand’s biggest export market as up to 26.52% of Thailand’s total exports were shipped to ASEAN in the first seven months of 2018. From January to August 2018, Thai exports to ASEAN grew by 9.04% compared to the same period in 2017 with US$44.2 billion in total value. Thailand will host two ASEAN summits next year, aiming to further develop and improve Thai-Asean trade relations.

Malaysian Prime Minister expresses support for the SDGs and for ASEAN to assume a bigger role
(11 October 2018) Malaysian Prime Minister Mahathir Mohamad expressed his concerns over megatrends involving the trade war between global powers. Speaking at the ASEAN Leaders Gathering in Bali which was held on the sideline of the International Monetary Fund (IMF)-World Bank annual meetings: “Achieving Sustainable Development Goals (SDG) And Overcoming Development Gap Through Regional and Global Collaborative Actions”, the Prime Minister said that the escalating trade war between China and the United States is neither going to benefit the countries involved nor the rest of the world. While underlining that Malaysia was dedicated to sustainable development growth, the Prime Minister also said that he was counting on other ASEAN countries to collaborate to achieve their respective SDG targets. He added that he would like to see ASEAN assume a bigger role than before and hoped for renewed support from the IMF, World Bank and the United Nations for ASEAN and this region.

ASEAN remains committed to supporting a robust multilateral trading system amid global trade tension
(11 October 2018) At the ASEAN Leaders Gathering on the sideline of the IMF-World Bank annual meetings in Bali, Singaporean Prime Minister Lee Hsien Loong stressed that ASEAN would remain “steadfast” in upholding an open and rules-based multilateral trading system. He said the bloc reiterated its international cooperation, amidst the growing trade crisis between the United States and China. He underscored that ASEAN is intensifying its efforts to the Regional Comprehensive Economic Partnership (RCEP) and believed that a substantial conclusion could be reached by the end of 2018. Singapore is the current chair of ASEAN.

Positive outlook for Vietnam’s economy in the short term though longer term risks remain
(10 October 2018) Vietnam’s GDP is forecasted to exceed 6.8% in 2018, but according to the Vietnam Institute for Economic and Policy Research (VEPR), internal and external risks will impact the country’s long-term prospects. Specifically, the US-China trade war and the devaluation of the Chinese yuan (CNY) would materially impact Vietnam, a country which is highly dependent on FDI to sustain the growth of its export-dependent economy. The VEPR said that Vietnam’s inflation target of 4% in 2018 can be achieved if there are no significant changes in energy prices during the fourth quarter. However, it could increase by 1.6% point if Vietnam increases the environmental tax protection on fuels by US$0.043. Vietnam’s economy in the third quarter expanded 6.88% year-on-year, which led to a growth rate of 6.98% from January to September 2018. This growth rate has been touted as the best nine-month performance since 2011. The VEPR indicated that the country is set to reach the National Assembly’s growth target of 6.7% for 2018.

Indonesia’s inflation rate expected to be 3.4% in 2018
(10 October 2018) Indonesia’s Bank Indonesia (BI) predicts that inflation will be 3.4% in 2018, lower than 3.61% in 2017 and within the central bank’s target range. At a central banks forum in Bali, BI Governor Perry Warjoyo said that while BI has set an inflation target rate of 2.5-4.5%, he was optimistic that the actual rate would go lower than the mid-rate of 3.5%. He added that joint efforts by the Central Bank and the government to maintain administered prices and the prices of primary commodities have helped to reduce inflation. Previously, Statistics Indonesia (BPS) reported a 0.18% reduction in consumer prices in September 2018.

State-owned Indonesian companies to diversify infrastructure-related funding sources
(9 October 2018) State-owned Indonesia firms will be inking agreements to push ahead the country’s planned infrastructure projects worth US$13.6 billion. Minister of State-Owned Enterprises Rini Soemarmo said that these collaborative efforts can help the country to deleverage and secure more equity-based financing thus diversifying its funding sources. Improving Indonesia’s leverage position is necessary as state companies which are major players in President Joko Widodo’s ambitious infrastructure push have borrowed extensively in order to meet financing needs of these projects. The Minister said that there would be over 20 deals signed by more than 12 state companies, including one by energy firm Pertamina and Taiwan’s CPC Corporation for a joint petrochemical business worth US$6.5 billion.

Singapore and Indonesia seal US$10 billion swap agreement
(11 October 2018) Bank Indonesia (BI) and Monetary Authority of Singapore (MAS) inked a deal to open a line for US$10 billion equivalent local currency swap and the United States Dollar repurchase agreement. The move is intended to enhance liquidity management, assist financial market deepening and stabilise the Indonesian and Singaporean economy. The agreement was signed during the ASEAN Leaders’ Meeting in Bali, and it was witnessed by Singaporean Prime Minister Lee Hsien Leong and Indonesian President Joko Widodo. The Indonesian and Singaporean government also signed various agreements on tourism promotion, protection of foreign investment and FinTech cooperation.

Japan pledges to continue spearheading free trade with Thailand
(9 October 2018) Japanese Prime Minister Shinzo Abe and Thailand Prime Minister Prayuth Chan-ocha pledged to cooperate in promoting free trade, with Thailand willing to join the Japan-led Trans-Pacific Partnership involving 11 countries. Abe also said that Japan agreed with Thailand, which leads the economic development in the Mekong region, to conclude the Regional Comprehensive Economic Partnership (RCEP) as early as possible. The countries part of the trade deal, namely Australia, China, India, Japan, New Zealand and South Korea plus the 10 members of the Association of Southeast Asian Nations is aiming for a broad agreement by the end of 2018. Both Thai and Japan leaders held the talks before the Mekong-Japan Summit Meeting in Tokyo on Oct 9.

Singapore, Malaysia, Thailand and The Philippines are the first ASEAN countries to lift barriers to cross-border investment advisory
(11 October 2018) ASEAN financial regulators have consented to permit cross-border investment advisory services and manage standards for social and sustainability bonds. The agreement was announced during the ASEAN Capital Markets Forum (ACMF) in Singapore. The forum launched a framework to ease cross-border movement of investment advisers to allow investors within the ASEAN member states better access to professional services. The first phase of the plan will introduce the “ACMF Pass”, which grants licensed professionals of participating ASEAN jurisdictions to provide advisory services with faster registration and no additional licensing requirements. The first four participating countries of the initiative are Malaysia, the Philippines, Singapore and Thailand.