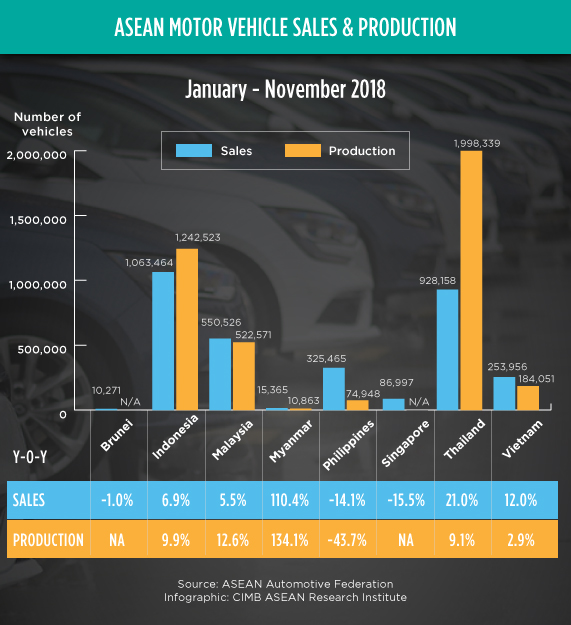 Vehicle production rose in all ASEAN states except the Philippines in 2018
(16 January 2019) Data from the ASEAN Automotive Federation found that all countries in the region except the Philippines posted a year-on-year increase in motor vehicle production from January to November last year. Indonesia topped the list with vehicle output growing by 9.9% to reach 1.24 million units during the 11-month period, while Thailand came in second with a 9.1% increase to almost two million units. The Philippines, however, registered a 43.7% decline in output and a 14.4% decline in sales. Nevertheless, the Philippines Chamber of Automotive Manufacturers maintained an optimistic outlook for the year as it expects consumers to have adjusted to the higher car taxes imposed and as the industry benefits from election-related spending.

ASEAN tourism sector seeks to promote ASEAN as single tourist destination
(16 January 2019) The 38th ASEAN Tourism Forum (ATF) is underway in Vietnam’s northern Quang Ninh province with 200 delegates including leaders of national tourism organisations (NTOs) in attendance. Held under the theme ASEAN: The Power of One, the forum aims to intensify regional efforts to promote ASEAN as a single tourist destination for international visitors and intra-block tourism. The forum will also provide a platform for the sale of tourism products from ASEAN countries. According to the Vietnamese National Administration of Tourism, Vietnam welcomed around 15.5 million visitors in 2018, a 19.9% increase from 2017. Of the sum, most visitors came from South Korea (44.3%), Finland (24.9%) and China (23.9%).

Philippines expects completion of e-commerce provisions for RCEP by 2Q
(13 January 2018) The ASEAN Secretariat has instructed the drafting of the e-commerce provisions under the Regional Comprehensive Economic Partnership (RCEP) to be completed in the first half of 2019, according to the Philippines’ designated negotiator for the e-commerce chapter Maria Lourdes A. Yaptinchay. Yaptinchay, who is also a Director of the Philippines’ Department of Trade and Industry (DTI), said that the department’s position is that e-commerce lowers the barriers to entry and operating costs for businesses, especially for micro, small and medium enterprises (MSMEs), which make up 99.6% of all registered businesses in the Philippines. According to trade secretary Ramon M. Lopez, the deadline for the e-commerce chapter indicates that the RCEP can be completed by November.

Online retail in Southeast Asia to reach $53 billion by 2023 on back of growing economies and high smartphone penetration
(17 January 2019) The online retail sector in Southeast Asia will grow at a compound annual growth rate (CGAR) of 23% to reach US$53 billion in 2023, according to forecasts by Forrester. This growth will be fueled by growing economies, high smartphone penetration, a young population, and an undeveloped offline retail market with logistics costs that have resulted in Southeast Asia having one of the lowest levels of retail gross floor area and limited stock-keeping units. Indonesia leads the way with 41% of online retail sales in the region last year, and Forrester expects the country’s online retail market to grow at a CAGR of 19.6% from 2018 to 2023, reaching US$19 billion in 2023. Further, the report found that the Philippines has the most active social media users in the world, who spent an average of four hours a day on social media in 2017. As such, Forrester expects the Philippines’ online retail market to grow at a CAGR of 30.4% in the next five years as online retailers continue to penetrate the market.

EU to impose tariffs on Myanmar and Cambodian rice for three years to protect domestic producers
(17 January 2019) The European Commission announced that the European Union (EU) will impose tariffs on rice from Cambodia and Myanmar for three years, effective January 18. The decision was made after investigations found that the 89% increase in imports of longer-grained Indica rice from the two countries in the past five rice-growing seasons reduced EU producers’ market share in Europe from 61% to 29%. As such, a duty of USD$200 per tonne of rice will be imposed in the first year, followed by US$171 in the second year and US$143 in the third year. The rice tariffs are separate from the EU’s Everything But Arms duty-free scheme which both countries also benefit from, but presently risk losing access to due to human rights issues.

Philippines mulls safeguard measures on imported ceramic tiles
(15 January 2019) Likewise, the Philippines Department of Trade and Industry (DTI) opened an investigation into the country’s imports of ceramic floor and wall tiles from the year 2013 to 2017, after allegations that the significant rise in imports has harmed the local industry. According to the DTI, ceramic floor and wall tile imports increased from 6,000 tonnes in 2013 to one million tonnes in 2016. As such, the market share of imported ceramic tiles grew from 4% in 2013 to 88% in 2016. Consequently, the market share of domestic manufacturers declined from 96% in 2013 to 14% in 2017, thus leading to the DTI’s investigation and possible application of safeguard measures on such imports.

Singapore outlines vision for Land Transport Master Plan 2040
(12 January 2019) The Singapore’s land transport advisory panel put forward a proposal for the country’s Land Transport Master Plan 2040, touting its ‘45-minute city, 20-minute towns’ vision. This means that 9 out of 10 commuters during peak hours would need only 45 minutes to commute to work and 20 minutes to reach amenities within residential towns. The proposal comes as the Land Transport Authority (LTA) seeks public feedback on its masterplan, particularly on three board themes i.e. how to make public transport the preferred mode of travel, how to create more inclusive commutes, and how to improve quality of life through public transport. The LTA envisions a ‘walk-cycle-ride’ public transport system which would include buses, rail, taxis, private hire cars, as well as active mobility devices such as bicycles and e-scooters.

Flexible working hours for women in Indonesia underway
(14 January 2019) The Indonesian government is planning to introduce new legislation to enable women to work more flexible hours in order to boost their participation in the labour market. According to manpower minister Hanif Dhakiri, as of August 2018, only 51.88% of women are represented in the country’s labour force as opposed to men at 82.69%. He attributed this to rigid regulations which provide that a worker who works a five-day work week must complete at least eight hours a day and 40 hours a week, which means that many women have to choose between caring for their families or pursuing their careers. As well, the ministry’s focus for 2019 will include promoting flexible work hours to meet industry changes, promoting the importance of social security of workers through the Workers Social Security Agency insurance scheme, as well as the competitiveness of Indonesia’s workforce.

The Philippines pushes for expansion of ASEAN green bonds framework
(17 January 2019) The Philippines is looking to expand the coverage of the ASEAN Framework for Green Bonds to include sectors such as transportation, infrastructure and commercial banking. Philippines finance secretary Carlos G. Dominguez III noted that the government hopes to mainstream access to green financing through banks and microfinance institutions, while addressing the adverse effects of climate change. ASEAN Green Bonds are defined as bonds or Islamic bonds designed to finance or refinance green projects. He noted that the Securities and Exchange Commission’s (SEC) guidelines on issuing green bonds under the regional framework has helped provide a reference point for determining the eligibility of green projects, but more should be done given the Philippines’ vulnerability to the effects of climate change.

Industry players remain optimistic about Myanmar’s economy in 2019 with more investments expected
(16 January 2019) Despite a decline in economic growth in 2018, several industry players interviewed by The Irrawaddy remained optimistic about the country’s economy in 2019. For instance, the head of Myanmar’s Directorate of Investment and Company Administration (DICA) expects the country to see more investments this year as it zeroes in on implementing the Myanmar Investment Promotion Plan (MIPP) that aims to attract over US$200 billion in investments in the next 20 years. Further, the vice president of the Union of Myanmar Federation of Chambers of Commerce and Industry (UMFCCI) also expressed confidence in the country’s “look east” policy (towards East Asia) and a more mature government which has now been in office for over two and a half years. Both representatives from DICA and UMFCCI also highlighted the upcoming Invest Myanmar Summit at the end of January as one of the government’s key investment initiatives for 2019.