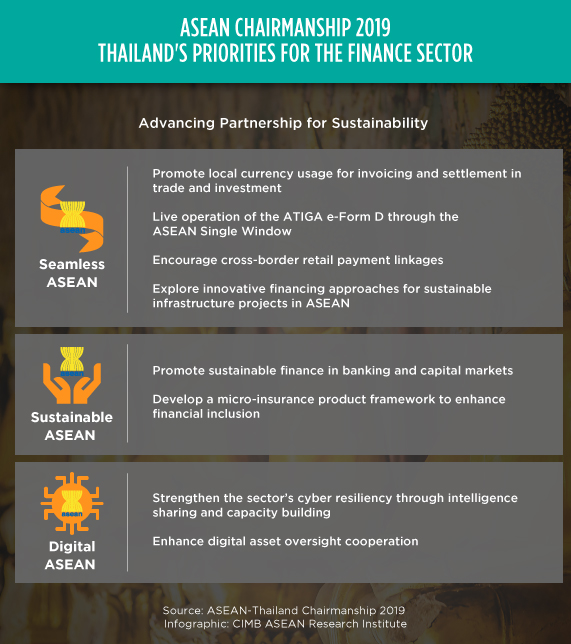 5th ASEAN Finance Ministers’ and Central Bank Governors’ Meeting held in Thailand
(5 April 2019) The 23rd ASEAN Finance Ministers’ Meeting and 5th ASEAN Finance Ministers’ and Central Bank Governors’ Meeting (AFMGM) and related meetings were held in Chiang Rai from April 2 to 5 under Thailand’s 2019 Chairmanship theme “Advancing Partnership for Sustainability”. The slew of high-level meetings kicked off with the ASEAN Plus Three Finance Ministers and Central Bank Deputies’ Meeting where the 13 countries in attendance agreed to employ more local currencies when transacting with each other in order to lower their dependence on the US dollar. This was followed by the ministerial meetings the next day as well as a number of major announcements, which includes the inking of: (i) an agreement between Indonesia and Thailand’s central banks to promote greater cooperation in the areas of digital payment systems, cross-border payments and supervision of payment systems; (ii) a memorandum of understanding (MOU) between the Thai and Lao central banks to elevate bilateral collaboration in financial innovation and payment services, particularly through the development of an interoperable QR code that will allow real-time, cross-border retail payments between the countries; and (iii) a MOU between Singapore and Cambodia’s central banks to conduct knowledge sharing between the countries in the area of FinTech innovation with a focus on emerging market trends and regulatory issues in the sector. Furthermore, ASEAN countries also pledged to create a standard QR code to facilitate regional transactions and adopt the national single window system to reduce regional trade barriers this year.

ASEAN, ADB launch US$1 billion facility to fund green infrastructure projects
(4 April 2019) ASEAN, together with the Asian Development Bank (ADB) and other major development financiers launched the ASEAN Catalytic Green Finance Facility on April 4 on the sidelines of the AFMGM meetings held in Chiang Rai this week. The new US$1 billion facility will provide loans and technical assistance to support green infrastructure projects, such as projects that promote sustainable transportation, clean energy and sustainable water systems. Aside from the ADB, the other major contributors to the fund are German state bank KfW, the European Investment Bank, French state bank Agence Francaise de Developpement, and the ASEAN Infrastructure Fund. The Organisation for Economic Co-operation and Development (OECD) and the Global Green Growth Institute will also support knowledge sharing and capacity building on green finance.

ASEAN Digital Agility concept launched to grow the region’s digital economy
(1 April 2019) The ASEAN Digital Ministers’ Retreat was held on March 28 to 29 in Phuket, Thailand, with the aim of discussing and supporting Thailand’s vision for the advancement of the region’s information and communication technology agenda as this year’s chair for ASEAN. According to The Phuket News, the meeting was led by Thai digital economy and society minister Dr Pichet Durongkaveroj, who also unveiled the “ASEAN Digital Agility” concept that aims to transform the region into a robust digital economy through five key areas, i.e., cybersecurity, connectivity and mobility, smart cities, digital economy, and manpower and society development. Meanwhile, a GovInsider interview with Thai Digital Economy Promotion Agency vice president Dr Passakon Prathombutr revealed Thailand’s hopes of leveraging its role as ASEAN chair to position the country as the region’s technological hub. According to Prathombutr, the goal is “to become the first, rather than the best.” As such, the government is moving quickly to develop its technological ecosystem and the laws needed to support the growth of a digital economy. Prathombutr also revealed that the country aims to be a hub for smart cities in ASEAN and that Thailand seeks to zero in on regional connectivity through a tech-focused agenda.

Experts urge ASEAN member countries to step up economic integration efforts
(3 April 2019) There are close to 6,000 non-tariff barriers in ASEAN and not one has been removed via regional processes ever since the ASEAN Economic Community (AEC) was first established in 2015, according to European Union-ASEAN Business Council head Chris Humphrey who was speaking as a panelist at a roundtable discussion hosted by the CIMB ASEAN Research Institute (CARI) on April 2. Fellow panellist Kaewkamol Pitakdumrongkit of the S. Rajaratnam School of International Studies agreed with this sentiment, and added that non-tariff barriers tend to have a larger impact on medium, small and micro enterprises as they have less resources to absorb the additional costs — which subsequently leads to lower participation from small businesses in the regional production network. As such, the panelists made several recommendations to tackle these issues, including the identification and collation of non-tariff measures through an open database, a system to inform member states of new measures, as well as an institution dedicated to reducing non-tariff barriers.

ASEAN-South Korea summit to be held in Busan in November
(1 April 2019) The South Korean presidential office announced on April 1 that the ASEAN-South Korea summit will be held on November 25 and 26, followed by a one-day summit with countries from the Greater Mekong Subregion. Both events will be held in Busan. According to the presidential office’s press secretary Yoon Do-han, the summit will be the largest international conference ever held during President Moon Jae-in’s time in office as it also serves as a celebration of the 30th anniversary of ASEAN-South Korea relations. Yoon further revealed that the presidential office is currently discussing the possibility of inviting North Korean leader Kim Jong-un to the summits with the Southeast Asian bloc. Separately, South Korean Customs Services commissioner Kim Yung Moon inked a memorandum of understanding with the Indonesian government to allow the bilateral exchange of electronic trade data as part of the countries’ efforts to facilitate better trade flows in accordance with the ASEAN-Korea Free Trade Agreement.

Indonesia and the Philippines agree to elevate bilateral trade and investment
(2 April 2019) Indonesian trade minister Enggartiasto Lukita’s recent bilateral meeting with the Phillippines’ trade and industry minister Ramon M. Lopez and agriculture minister Immanuel Pinol in Manila resulted in several trade and investment agreements between the countries. Most notably, the Indonesian minister announced that they will no longer impose anti-dumping duties on bananas and non-tariff measures on onions from the Philippines — a development that both sides consider to be a “breakthrough” in addressing the existing trade imbalance between the countries. Furthermore, Indonesia agreed to review its current policies on non-agricultural exports such as pharmaceutical products, which currently states that exporters must first invest in Indonesia in order to gain access to the market. Both sides also agreed to a combination of working groups and a business matching event.

Tripartite working group to be formed to address palm oil dumping into the Philippines
(29 March 2019) The Philippines’ agriculture secretary Emmanuel Pinol announced on March 28 that a tripartite technical working group will be formed with Malaysia and Indonesia to address the alleged smuggling and dumping of palm oil from the two countries in the Philippines in recent years. The announcement follows a recent recommendation by the Philippines’ Department of Agriculture to impose a temporary ban on palm oil imports from both countries due to said issues. Figures from the Philippine Statistics Authority (PSA) show that the country saw a 169.34% increase in imports from Malaysia by metric tons in 2018 compared to 2017, as well as a 136% increase in imports from Indonesia in the same period. According to Pinol, the crux of the matter lies in how the rise of palm oil imports has affected local palm and coconut oil prices. As such, the Philippines is looking to rationalise palm oil imports from Malaysia and Indonesia moving forward, and hopes that both countries will also consider giving its coconut-based products greater access to their markets.

ITRC members agree to cut rubber exports to stabilise global rubber prices
(1 April 2019) Members of the International Tripartite Rubber Council (ITRC) — Indonesia, Malaysia and Thailand — agreed to reduce their combined natural rubber exports by 240,000 tonnes in hopes of stabilising global rubber prices. To this end, Indonesia and Malaysia will start reducing their rubber exports over the next four months starting April 1 by 98,160 tonnes and 15,600 tonnes respectively, while Thailand will reduce their exports by 126,240 tonnes beginning May 20. According to The Jakarta Post, the Indonesian government will look to offset the decrease in exports by expanding the domestic market for natural rubber, such as by using it in the material mix for the construction of roads or manufacturing of retread tires.

Cambodia announces economic reform measures in preparation for the potential withdrawal of EU EBA privileges
(29 March 2019) Cambodian Prime Minister Hun Sen announced a 17-point economic growth strategy that is expected to help exporters save up to US$400 million a year through lower operating costs. The announcement, which was made at the 18th Government-Private Sector Forum on March 29, was made in preparation for the European Union’s (EU) potential revocation of Cambodia’s special tariff privileges under the Everything But Arms (EBA) scheme. The 17 measures include the removal of Cambodia Import-Export Inspection and Fraud Repression (CamControl) units from all land border checkpoints and the Kampuchea Shipping Agency and Brokers (Kamsab) officers from all ports. Furthermore, scanning fees for container exports and imports and other logistical procedures will either be removed or greatly reduced. Additionally, electricity prices for the industrial sector will be reduced and investment laws amended to attract more investments. According to the Prime Minister, these measures are necessary because even if the EU does not go ahead with the rescindment of its EBA privileges by August 2020, Cambodia will still lose such privileges when the country graduates from the least-developed country status.

Vietnam and France reaffirm their commitment in advancing bilateral cooperation
(2 April 2019) Vietnamese National Assembly Chairwoman Nguyen Thi Kim Ngan’s official visit to France on April 1 concluded with both nations agreeing to strengthen bilateral relations in various areas. Most notably, both sides agreed to expedite the inking and ratification of the EU-Vietnam Free Trade Agreement (EVFTA) and intensify business cooperation. The chairwoman also requested support from France in its request to lift the EU’s yellow card warning to Vietnam as the country has made efforts to implement the EU’s recommendations (such as its law on fisheries). According to Ngan, France is presently Vietnam’s third largest investor with investments worth US$2.8 billion and fourth largest trade partner within Europe with trade valued at US$5.1 billion.