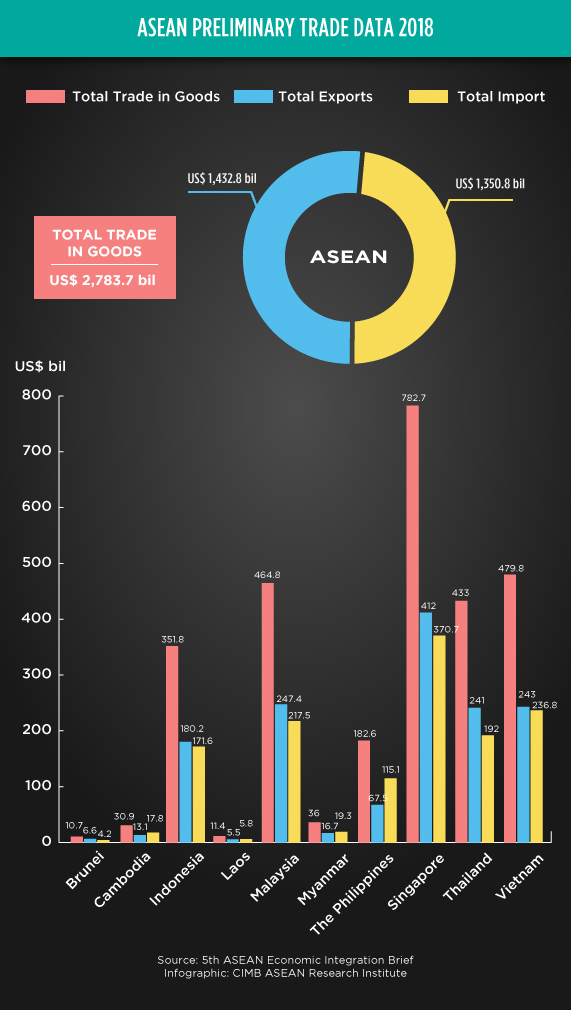 Singapore exports continue decline with 17.3% plunge in June
(17 July 2019) Singaporean exports recorded its fourth consecutive month of double-digit decline in June as non-oil domestic exports saw a 17.3% year-on-year drop in June, according to the latest Enterprise Singapore data. The city state’s 15.9% drop in exports in May failed to put a damper on economists’ outlook, as those polled by Bloomberg predicted that June’s exports would only see a 9.6% drop. The drop was largely fueled by a continued decline in electronic exports such as integrated circuits, personal computers and disk media products, which contracted 31.9% in June after contracting 31.6% in the previous month. Non-electronic exports also suffered the same fate due to lower gold, petrochemical and pharmaceutical shipments as it recorded a 12.4% year-on-year drop in June, down from 11.1% in May. All in all, Singapore’s total trade in June recorded a 7.2% drop.

Vietnam, Malaysia trade drops 6.2% in the first half of 2019
(15 July 2019) Trade revenue between Vietnam and Malaysia saw a 6.2% year-on-year drop reaching only US$5.48 billion in the first half of 2019, according to the latest figures from the Vietnamese trade office in Malaysia. According to the trade office, Vietnam’s export revenue dipped 2.6% to US$1.95 billion, while its import revenue dropped 8.1% to US$3.5 billion. The plunge is led by a drop in petrol imports (41.6%), machinery and spare parts (20%), animal and vegetable oil (14%), and material plastics (11.2%). However, import revenue for household electrical appliances and accessories bucked the trend as it increased 8.7%. Furthermore, most of Vietnam’s major exports to Malaysia also declined, including computers, electronic products and accessories (25.3%), telephones (30.2%), crystal and crystal products (24.4%). However, exports of other products such as machineries and accessories, transport vehicles and fisheries increased. In June alone, trade between both countries was US$806.6 million, down 14.6% over the same period last year.

Singapore, Vietnam form joint business council to strengthen ties
(16 July 2019) The Singapore Business Federation (SBF) and Vietnam Chamber of Commerce and Industry (VCCI) announced on July 16 the establishment of the joint Vietnam-Singapore Business Council (VSBC) to intensify their cooperation. The VSBC, which also held its inaugural meeting in Hanoi on the day of the launch, aims to facilitate business opportunities between both countries, share research and best practices to promote economic cooperation, and make joint recommendations on such matters to both governments. According to SBF, the association is eyeing partnerships in five priority areas: urban development, energy, consumer, industry 4.0 and manufacturing, and startups and innovation. Meanwhile, the International Monetary Fund (IMF) has trimmed its growth forecasts for Singapore from 2.3% to 2%, and Vietnam from the country’s 10-year high of 7.1% in 2018 to 6.5% in 2019 — both due to weakening external conditions caused by global trade tensions.

Malaysia sees US$7.12 billion in FDI inflows in Q1 2019
(15 July 2019) Malaysia recorded a 73.6% year-on-year increase in foreign direct investment (FDI) inflows in the first quarter the year totalling US$7.12 billion (RM29.3 billion), international trade and industry minister Darell Leiking said in response to a question in parliament. He added that this sum represents 54.4% of the total investments approved during the first quarter, with domestic investments accounting for the remaining 45.6% at US$5.98 billion (RM24.6 billion). The lion’s share of the quarter’s FDI went to the manufacturing sector (US$4.9 billion) and services sector (US$197 million). According to Leiking, the ministry has been ramping up efforts to promote Malaysia as an investment destination to cushion the negative effects resulting from the US-China trade war.

Structural reforms needed for the Indonesian economy to grow above 5.5%
(16 July 2019) Indonesia’s economy can only grow between 5.0-5.5% in the short term based on current productivity levels and the country risks falling into the middle-income trap, finance minister Sri Mulyani Indrawati told the House of Representatives on July 16. To avoid this, she said, Indonesia must find ways to grow at above 6% annually, such as through structural reform policies aimed at increasing the country’s production capacity, simplifying regulations for doing business in the country, and developing local human capital. Meanwhile, the Indonesian statistics bureau reported on July 15 that the country recorded a narrower-than-expected trade surplus of around US$200 million in June, as imports rose 2.8% year-on-year to US$11.58 billion and exports fell 8.98% to US$11.78 billion. Statistics bureau chief Suhariyanto attributed June’s weak numbers to the holidays at the end of the Muslim fasting month of Ramadan.

Government crafting EO to rationalise port fees imposed on importers
(16 July 2019) The Philippines’ government is currently drafting an executive order (EO) to be signed by President Duterte that will grant one public agency — either the Maritime Industry Authority or the Philippine Ports Authority — with the mandate to address port issues, trade secretary Ramon M. Lopez told local media on July 15. According to Lopez, the EO will also provide more comprehensive provisions to better tackle port congestion and regulate shipping rates. He stressed that while the EO will not impose a price cap on shipping operators, it will enable the authority to enforce a price range for specific shipping charges and slap penalties on operators who violate said range. According to a study by Lopez’s ministry and the World Bank, the Philippines has the highest logistics cost in Southeast Asia, with businesses in the country allocating around 27.16% of their revenue on logistics costs — as opposed to 11.11% in Thailand, 16.3% in Vietnam and 21.4% in Indonesia.

Malaysia, Indonesia to challenge EU’s biofuel regulation at WTO
(16 July 2019) Malaysia and Indonesia reiterated their commitment to challenging the European Union’s directive to limit the use of palm oil in biofuels at the World Trade Organisation (WTO) and through other possible legal avenues, according to a statement published by the Malaysian Ministry of Primary Industries on July 16. The statement, which was published following the 7th Ministerial Meeting of the Council of Palm Oil Producing Countries (CPOPC), also said that the council has proposed the establishment of a joint CPOPC-EU palm oil working group to engage palm oil-producing countries and coordinate responses to the EU’s directive. Besides that, the group also agreed to keep the maximum contaminant level of 3-Monochloropropanediol (3-MCPDE) at 2.5 ppm for all vegetable oils to ensure safe consumption. According to the ministry, all palm oil-producing countries have been invited to attend the Second Ministerial Meeting of Palm Oil Producing Countries to be held in Kuala Lumpur on November 18.

Myanmar’s US$400 million stock market to open to foreigners
(14 July 2019) The Securities and Exchange Commission of Myanmar (SECM) announced on July 12 that foreign individuals will soon be allowed to invest in the stocks listed on the Yangon Stock Exchange (YSX) by up to 35%. However, no date was given as to when this new regulation will take effect, although trading is expected to start by year-end. It is also unclear whether both resident and non-resident foreign individuals will be allowed to trade on the YSX. According to local analysts, the move will no doubt spark interest among retail investors in Yangon, but institutional investors (including global assets and fund managers) will likely only be interested when there are more listings on the exchange. According to the Myanmar Times, there are only five companies listed on the YSX as of the date of the SECM’s notice.

Foreigners to be barred from employment in 10 types of jobs
(16 July 2019) The Cambodian Labour Ministry announced on July 15 that the government will soon enforce regulations barring foreign individuals from working in 10 types of jobs to promote and prioritise the employment of Cambodian citizens. According to labour ministry spokesperson Heng Sour, the 10 categories of work can be broadly split into two classes. Firstly, informal work or self-employment such as running a small business, driving taxies, tuk-tuks or rickshaws, and working as a barber, street vendor or courier. The second category consists of managerial positions in human resources and administration in private institutions and enterprises. Furthermore, foreigners will be required to pay US$180 per year for long-term visas, US$130 per year for an employment book or card, and another US$50 per year for a foreign employee quota application — thus generating US$360 in government revenue each year for every foreigner seeking work in Cambodia.

Vietnam aims to become ASEAN’s leading digital economy by 2030
(13 July 2019) The Vietnamese Authority of Information Technology Application (AITA) has been tasked with the drafting of a national digital transformation proposal that aims to position the country as the leading digital economy in ASEAN by 2030, according to AITA director Nguyen Thanh Phuc. Under the proposal, which will be submitted to the Ministry of Information and Communications in November, Vietnam will aim to grow its digital economy by 20% each year, grow its labour productivity by 7-10% by 2030 and have everyone using mobile payment services by 2030. According to Phuc, the roadmap will be implemented in three phases: (i) digitalisation of key sectors from 2020-2022, (ii) digital transformation to boost labour productivity and competitiveness from 2023-2025, and (iii) development of a mature digital economy and society from 2026-2030.