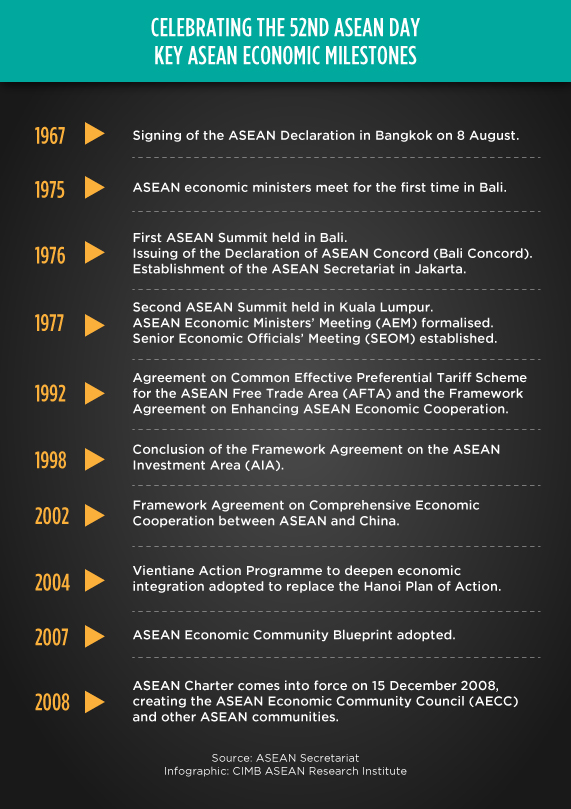 ASEAN celebrates its 52nd anniversary on August 8
(8 August 2019) The ASEAN Day celebrations in Jakarta kicked off on August 8 with the inauguration of the new ASEAN Secretariat building comprising two 16-storey towers. The building was inaugurated by Indonesian President Joko Widodo, who made the symbolic handing-over of the building’s key to ASEAN Secretary-General Lim Jock Hoi to mark the opening of the new building. Meanwhile, Vietnam’s Ministry of Foreign Affairs celebrated the occasion with a flag-hoisting ceremony, during which deputy foreign minister Nguyen Quoc Dung noted ASEAN’s many milestones, such as the establishment of the ASEAN Free Trade Area in 1992 which formed the first building block for the region’s economic integration. In Malaysia, foreign ministry secretary-general Muhammad Shahrul Ikram Yaakob said that Malaysia looks forward to the continued advancement of the ASEAN single market agenda to ensure an even freer flow of goods, services, investments, capital and skills as envisioned by the ASEAN Economic Community (AEC) 2025.

More RCEP market access issues sealed
(5 August 2019) Over two thirds of the Regional Comprehensive Economic Partnership’s (RCEP) market access negotiations are now completed, bringing the total number of concluded chapters to seven chapters and three annexes, according to a joint statement published after the 8th RCEP Intersessional Ministerial Meeting held in Beijing on August 3. According to the statement, market access negotiations were the most challenging to conclude as it involved tariffs, concessions, and sensitive products and services of the 16 negotiating parties involved. The ministers also said that it was in the region’s “collective interest” to conclude the RCEP this year and it was therefore being treated as the “most important trade agenda in the region.”

Lao government slashes red tape to improve ease of doing business
(2 August 2019) The Lao Ministry of Industry and Commerce recently published a summary of changes that it has made to improve the country’s business climate and Laos’ placing on the World Bank’s Ease of Doing Business index. These changes include (i) reducing the number of steps needed to start and register a business from 10 to four, shortening the whole process from 174 days to under 40 days; (ii) reducing the steps needed to obtain construction permits from 11 to seven, and within a month; (iii) the development of a digital system to regulate land and expedite property registration; (iv) planned amendments to the contract guarantee and insolvency laws in the next two years, along with the creation of a credit database; and (v) new and amended legislation to protect minority investors, which includes management and reporting regulations for listed companies.

Thai, PH central banks cut benchmark interest rates
(7 August 2019) The Bank of Thailand and Bangko Sentral ng Pilipinas, along with the central banks of India and New Zealand, announced this week that they have slashed their benchmark interest rates to boost their economies. According to Bloomberg, the Thai central bank’s move to slash its key rate by a quarter percentage point to 1.5% came as a surprise since the bank had earlier resisted rate cuts due to concerns over consumer debt and financial stability. Analysts wager that the escalating US-China trade tensions, worsening drought and rising baht likely led to the Bank of Thailand’s change of heart. Similarly, the Philippines’ central bank reduced its overnight borrowing rate by 25 basis points to 4.25% as the Philippine economy grew at its slowest pace in over four years in the second quarter of 2019.

Energy Ministry outlines five pillars to build regional power hub
(6 August 2019) Thailand’s Energy Ministry shared its five pillars to turn Thailand into ASEAN’s power trade hub: digitisation, decarbonisation, electrification, decentralisation and deregulation. According to the ministry’s permanent secretary Kulit Sombatsiri, Thailand will disrupt the energy sector using these pillars and the ministry has set up a working group that involves all major energy agencies to conduct feasibility studies and draw up plans to achieve its vision. More specifically, the plan will see the improvement of high-voltage transmission lines across Thailand to position the country as the regional hub for power trading. Furthermore, surplus electricity generated in Thailand and Laos will also be sold to the rest of Southeast Asia, thus producing greater revenue for each country.

Thailand to expand infrastructure investment fund and reform taxation
(6 August 2019) Thai finance minister Uttama Savanayana listed expanding the Thailand Future Fund (TFF) and tax reform as two key policy priorities to boost economic development and reduce income inequality. The minister, who was speaking at the Bangkok Post Forum on August 5, also outlined his urgent to-dos which include high expenditure on infrastructure development and public welfare, catching up with technological developments through mobilising capital to invest in digital infrastructure. These, he said, are all necessary but budget-intensive measures, which is why his ministry is also focused on expanding the TFF. Furthermore, the finance ministry is also looking at tax reform to raise funds to finance infrastructure development, such as through the imposition of taxes on e-commerce and online businesses.

46 countries sign Singapore Convention on Mediation
(7 August 2019) 46 countries signed the United Nations (UN) Convention on International Settlement Agreements Resulting from Mediation, better known as the Singapore Convention on Mediation, in the island state on 7 August. The US, China, India and South Korea were among the first 46 signatories to the treaty, which will come into effect once three countries have ratified it. According to a media report, countries who have signed and ratified the treaty will be responsible for ensuring that international commercial settlement agreements can be invoked in or are enforced by their courts. The treaty is seen as a boon for Singapore, which has been working to position itself as a global hub for mediation and dispute resolution.

Vietnam mulls importing US coal for power generation amidst trade dispute
(6 August 2019) Vietnamese state-run coal company Vinacomin met with US coal company Xcoal in Hanoi last week to discuss the possibility of importing coal from the US to meet Vietnam’s growing local demand for fuel, according to a report by state-owned newspaper Dau Tu. The report follows the Vietnamese Ministry of Industry and Trade’s recent admission that the country will likely face severe electricity shortages from 2021 unless it imports 680 million tonnes of coal during the 2016-2030 period. Coal is expected to account for 42.6% of Vietnam’s power generating capacity by 2030, up from 38.1% presently. The move is also seen as another way for Vietnam to reduce its trade surplus with the US. Last month, a Vietnamese crude oil refinery also announced that it would import two to three million barrels of US crude in the second half of 2019.

Tata Steel scraps deal to sell Southeast Asia assets to Chinese group
(7 August 2019) India’s Tata Steel has cancelled the sale of its Southeast Asian subsidiaries NatSteel Holdings and Tata Steel Thailand to China’s HBIS Group, due to HBIS’ inability to obtain the necessary regulatory approvals from the Hebei government. The companies had earlier signed an agreement in January which would’ve seen Tata selling its stakes to HBIS for around US$327 million, and the setting up of a new company with HBIS owning 70% and Tata 30%. According to analysts, it will be an uphill task for Tata Steel to find investors for its Southeast Asian business given the weak steel market. Tata Steel also said in July that lingering uncertainty caused by the trade war has “had an adverse effect on investment decisions, capex spend and trade flows.”