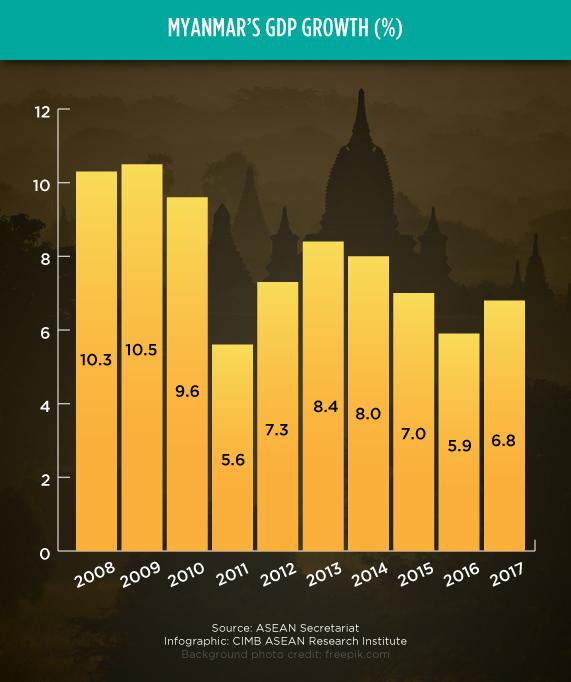 Myanmar’s National Plan 2019-2020 targets 7% growth
(16 September 2019) The Myanmar Parliament approved this week a new National Plan for the upcoming fiscal year from 1 October 2019 till 30 September 2020. The country’s GDP is projected to grow by 7% under the plan, up from 6.8% in the current fiscal year, led by the financial and industrial sectors which are expected to grow by 11.3% and 9.9% respectively. Furthermore, the country’s trade deficit is projected to reach US$2 billion, with imports worth US$17.5 billion. The private sector is expected to contribute to over 70% of investments during the period. The World Bank however only predicts growth of 6.7% in 2020-21.

Indonesia posts US$85.1 million surplus in August
(16 September 2019) Indonesian government data recorded a US$85.1 million surplus in August, up from the US$953 million deficit it recorded in August 2018. Similarly, the country recorded a US$1.81 billion trade deficit in the first eight months of the year, down from the US$4.16 billion it saw during the same period last year. According to statistics agency head Suhariyanto, August’s surplus was due to a 8.53% decrease in imports to US$14.20 billion, an even bigger fall than the 7.6% decrease in exports to US$14.28 billion in the same month.

Singapore’s non-oil exports fell 8.9% in August
(17 September 2019) Singapore’s non-oil domestic exports recorded its sixth consecutive month of year-on-year decline as it fell 8.9% in August, according to the latest government data. This was primarily due to lower exports to most of its key markets such as Hong Kong (-32%), Malaysia (-19.7%) and the US (-15%), led by a drop in electronic exports (25.9%). However, its exports to China recorded a 38.5% increase. The country’s total trade fell by 8.6% year-on-year in August, following a 6.2% drop in July.

The Philippines’ domestic trade weakens in Q2 2019
(18 September 2019) Total domestic trade in the Philippines decreased 10% to 5.86 million tonnes during the second quarter of 2019 from 6.51 million tonnes in the same quarter in 2018, according to the Philippine Statistics Authority (PSA). In terms of value, total domestic trade fell by 17.9% year-on-year from US$4.14 billion in the second quarter of 2018 to US$3.4 billion in the same quarter this year. Trade of machinery and transport equipment accounted for 36.3% of the total value, while food and live animals accounted for most of the total trade in terms of quantity.

Malaysia sets up panel to fast-track investments amidst trade war
(17 September 2019) Malaysia’s new National Committee on Investment (NCII) has approved US$526 million in new investment proposals this month, said deputy trade minister Ong Kian Ming. According to Ong, the NCII was established to expedite investment approvals as the country looks to attract businesses affected by the US-China trade war. For instance, he said, proposals which would have taken three months to process before will now only take a month. The NCII is chaired by the ministers of finance and trade who have the authority to approve incentives immediately.

Axiata seeks Malaysia, Indonesia operations mergers after Telenor talks end
(17 September 2019) Malaysian telecommunications company Axiata Group may merge its Indonesian and Malaysian operations in the next three to five years to “future proof” the company, said Axiata head Jamaludin Ibrahim. Jamaludin’s comment follows Axiata’s recent announcement that it has ended talks with Telenor ASA to form a joint venture. According to Bloomberg, Southeast Asian telcos have been turning to mergers and acquisitions in recent years to ensure continued growth, with deals in the sector totalling US$2.7 billion so far this year.

US scrap industry eyes Southeast Asia as China’s market closes
(13 September 2019) The US scrap industry is turning to Southeast Asian countries, especially Malaysia and Indonesia as destinations for US nonferrous exports following China’s crackdown on scrap imports. According to a recent US commodity roundtable held in Chicago, Malaysia is now the top destination for US nonferrous exporters who are seeking alternatives outside of China. US aluminium exports to Malaysia in the first seven months of 2019 alone reached 120,000 tonnes, expected to eclipse 2018’s total of 180,000 tonnes.

Thai, Cambodian SEC sign pact on capital markets
(18 September 2019) Thailand and Cambodia’s Securities Exchange Commission (SEC) inked a memorandum of understanding (MoU) this week to connect their capital markets through cross-listing, dual listing and depositary receipt offerings. According to Thai SEC head Ruenvadee Suwanmongkol, both sides will develop capital market products for securities issuers for sale in each country, while providing greater support for business expansion, increased liquidity and access to funding resources. The initiative is also in line with Thailand’s long term strategy to position itself as a regional fundraising hub.

RCEP talks to proceed without investor-state dispute mechanism
(13 September 2019) Countries involved in the Regional Comprehensive Economic Partnership (RCEP) negotiations agreed during the recent 7th RCEP Ministerial Meeting held in Bangkok to put negotiations for the pact’s investor-state dispute settlement (ISDS) mechanism on hold. It is hoped this will ensure that negotiations can be concluded by the end of the year, said Malaysian trade minister Darell Leiking. However, they will review the need for such a mechanism once the pact is ratified and in force. The next round of RCEP talks will be held in Vietnam from 19 to 27 September.