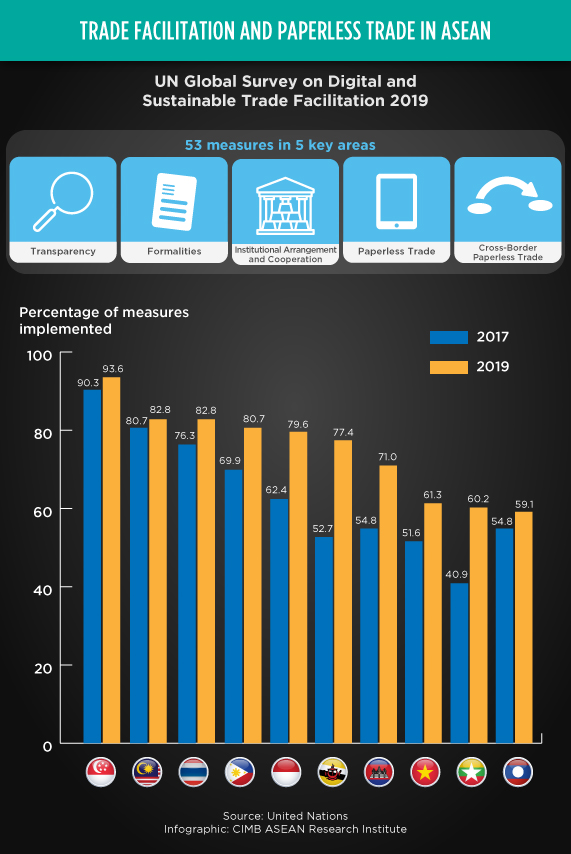 Singapore and Myanmar sign bilateral investment treaty to facilitate investments
(24 September 2019) The 7th Singapore-Myanmar Joint Ministerial Working Committee meeting concluded with the inking of the legally-binding Bilateral Investment Treaty on the Promotion and Protection of Investments that will allow Singapore enterprises in Myanmar to seek arbitration should they run into investment disputes. The treaty also lays out rules on how Singapore and Myanmar should treat investors from each country to give investors the freedom to transfer capital and returns, seek compensation, and ensure non-discriminatory treatment for investors in many sectors, among other things. Singapore is Myanmar’s largest foreign investor, with a cumulative investment of US$22.1 billion (as of August 2019).

2020 state budget bill passed into law with focus on human capital development
(25 September 2019) Indonesia’s House of Representatives passed the country’s 2020 state budget bill into law this week that sets the budget deficit at US$21.8 billion or 1.76% of GDP while targeting economic growth at above 5%. According to finance minister Sri Mulyani Indrawati, the budget is focused on stimulating the economy, human capital and social security development, infrastructure development, research and development, village and regional funds, as well as the strengthening of university endowments.

Garment workers to get increased minimum wage in 2020
(22 September 2019) Cambodia’s National Committee for Minimum Wage — comprising unions, employers and the government — announced that the minimum wage for the country’s textile and footwear factory workers will increase by US$8 next year from US$182 to US$190 per month. Furthermore, the workers will continue to receive other benefits such as an additional US$10 per month for regular attendance and US$7 per month for transportation and rent. The new rate will take effect in January 2020.

Thai exports see 4% drop in August, commerce ministry maintains 3% export target
(20 September 2019) Thailand’s exports declined by 4% in August, resulting in a US$21.9 billion loss. According to the commerce ministry, the drop was largely due to the front-loading of imports to avoid US tariffs which took effect on September 1. Nevertheless, the ministry is maintaining its 3% export target despite exports contracting by 2.2% in the first eight months of 2019 as they pin their hopes on commerce minister Jurin Laksanawisit’s upcoming visits to China and India where he will seek new markets for Thai agricultural products.

Palm oil export levies suspended to help producers cope with low CPO prices
(25 September 2019) The Indonesian government has suspended taxes imposed on exports of crude palm oil (CPO) and its derivative products until January 2020 to help palm oil producers cope with the drop in CPO prices. The suspension will last until January when the government’s new mandatory B30 biodiesel policy kicks in. CPO prices stood at US$574.9 per tonne as of September 20, and is expected to drop to US$570 per tonne until the end of the year.

The Philippines mulls safeguard duty on rice to protect domestic farmers
(23 September 2019) The Philippines’ agriculture secretary William Dar said this week that the government is considering imposing a safeguard duty on rice imports to protect small farmers “by not allowing additional imports especially this main harvest season.” The move follows the government’s removal of an old import cap earlier this year which it replaced with tariffs. The move has thus far led to the importing of 2.4 million tonnes of rice and a 10-13% dip in retail prices.

Free trade talks with the EU to resume once new European Commission formed
(24 September 2019) Thailand will resume negotiations with the European Union (EU) for a free trade agreement (FTA) once the new European Commission is formed next month. According to trade negotiations head Auramon Supthaweethum, public hearings will also be held in October and November to collect stakeholder feedback on the FTA, after which proposals will be submitted to cabinet. EU-Thailand trade reached US$47.3 billion last year, with Thai exports accounting for US$25 billion and imports US$22.2 billion. Both sides also agreed to revive talks for an ASEAN-EU FTA.

Indonesia, Japan reach deal on rail project connecting Jakarta to Surabaya
(25 September 2019) Indonesia and Japan inked an agreement this week outlining plans for a medium-speed rail connecting Indonesian capital city Jakarta with its second-largest city Surabaya, after two years of negotiations. When completed, the rail will serve 54 trips, each carrying 900 passengers daily at double its current speed, thus reducing travel time from nine hours to five and a half hours. The development will be done in two phases: first from Jakarta to Semarang, then from Semarang to Surabaya, covering a total of 720 kilometres. Construction of the railway is expected to start in 2020.