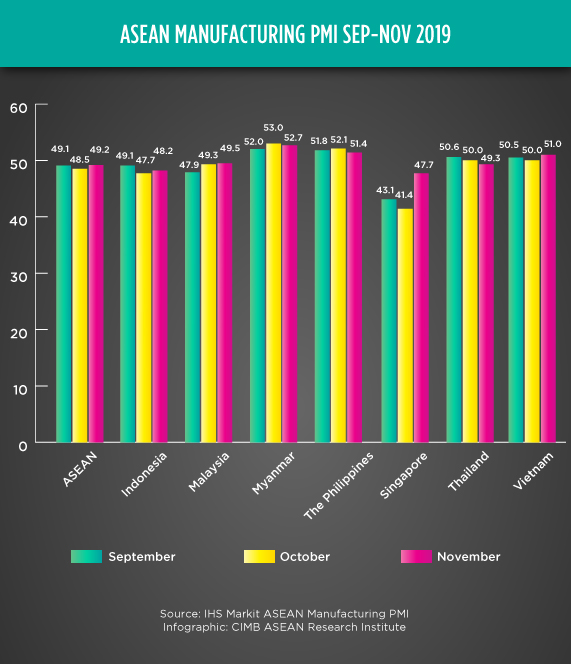 ASEAN PMI signals sixth month of weak manufacturing activity
(4 December 2019) Manufacturing firms in the Southeast Asian economic bloc saw manufacturing conditions recording a sixth consecutive month in decline in November as the bloc’s headline PMI rose to 49.2 from 48.5 the previous month, based on the latest IHS Markit Purchasing Managers’ Index (PMI) which takes into account output, new business and employment data. Myanmar, the Philippines and Vietnam were the month’s strongest performers of the seven ASEAN countries on the index, with Myanmar leading the way with its 13th consecutive month in improved operating conditions and growth.

Vietnam sees US$9.1 billion trade surplus during Jan-Nov 2019 period
(29 November 2019) Vietnam recorded a 7.8% year-on-year increase in export turnover from January to November this year totalling US$241.42 billion, while its import revenue increased by 7.4% on the year reaching US$232.31 billion — resulting in a US$9.1 billion trade surplus during the 11 months. According to government data, 91.6% of its export revenue came from 30 types of goods such as phones and components which generated US$48.7 billion, and electronic products, computers and components which generated US$32.4 billion. Vietnam’s exports to the US also increased US$27.9% on the year during the period totalling US$55.6 billion.

Malaysia records approved investments of US$35.8 billion in first nine months of 2019
(2 December 2019) Malaysia approved US$35.8 billion in investments in the first three quarters of 2019, with domestic investment accounting for 55.5% or US$19.8 billion of the sum and foreign direct investment (FDI) accounting for the remaining 44.5% or US$15.9 billion. According to the Malaysian Investment Development Authority, most of these investments went to the country’s three key sectors, i.e. the services, manufacturing, and primary sectors. Total approved FDI to these sectors rose by 6.5% from US$14.9 billion during the first nine months of 2018 to US$15.9 billion this year.

Indonesia to streamline laws to lure foreign investment
(2 December 2019) President Joko Widodo announced that the Indonesian government plans to merge parts of 74 existing laws into one job creation omnibus bill that they will seek to pass in January 2020. According to deputy economic affairs minister Iskandar Simorangkir, the bill will cover 11 key areas such as business permits, labour, special economic zones and SMEs. Separately, Indonesia is reportedly looking to establish a US$10 billion sovereign wealth fund similar to Singapore’s Temasek and Malaysia’s Khazanah that aims to boost the economy and invest in local startups.

Indonesia plans income tax reforms and new digital tax
(29 November 2019) Indonesian finance minister Sri Mulyani Indrawati revealed that the government is working on a slew of tax reforms, which could include (i) taxing citizens and foreigners only on income that they earn in Indonesia, (ii) removing the overseas dividend tax on companies which hold under 25% in shares, (iii) lower the penalty interest rate from the current 2% per month to the market interest rate, (iv) gradually lower the corporate income tax from 25% to 22% in 2021 and 20% in 2023, (v) a five-year 3% tax break for companies that go public, and (vi) the introduction of a new digital economy tax.

Myanmar awards insurance licenses to 11 firms
(28 November 2019) Myanmar has granted life insurance licences to the fully-owned subsidiaries of Britain’s Prudential, Japan’s Dai-ichi Life, Hong Kong’s AIA, US’s Chubb and Canada’s Manulife half a year after they were awarded provisional licenses — marking the first time the country has awarded licences to fully foreign-owned entities. Additionally, the government also awarded three life and three non-life insurance licences to six joint ventures between local and foreign firms. According to a report published in July, less than 4% of Myanmar’s population is covered by any form of insurance.

Commerce ministry’s draft trade bill alarms private sector
(3 December 2019) A local media outlet published a report highlighting private sector concerns with regards to the government’s draft trade bill. According to the report, the bill would (i) authorise the commerce ministry to enforce price control measures on products, (ii) allow a new trade development body to issue a list of trade-related restricted items and other non-tariff regulations, (iii) regulate the e-commerce industry, (iv) require companies to apply for a trade registration certificate to carry out trading activities, and (v) apply additional regulations for the trade registration of individual traders, among other things.

EU to continue imposing tariffs on Thai sweet corn
(2 December 2019) The European Commission announced the renewal of tariffs on sweet corn imports from Thailand for another five years effective 3 December, saying that Thai sweet corn exporters continue to unfairly undercut the bloc’s “still vulnerable and fragile” local industry through dumped prices. With this, tariffs of up to 14.3% will continue to be imposed on prepared or preserved sweet corn kernels from Thailand. Thailand’s sweet corn exports accounted for 3.9% of the EU market in the 12 months through June 2018.

Brunei’s makes first shipment of hydrogen to Japan
(2 December 2019) Brunei flagged off its first shipment of hydrogen to Japan this week to the Toa Oil Company in Kawasaki as part of what it calls “the world’s first global hydrogen supply demo project”. The supply of hydrogen was produced in Brunei’s Sg Liang Industrial Park, where an association representing a consortium of Japanese companies have built a hydrogenation plant. A total of 210 tonnes of hydrogen will be shipped to Japan over 12 months. According to officials, Brunei was selected due to its geographic proximity to Japan and experience in liquefied natural gas production.

B30 implementation gets green light after road tests
(29 November 2019) The Indonesian Energy and Mineral Resources Ministry announced last week that the country’s B30 biodiesel policy is ready to be implemented beginning 1 January 2020 as planned following a series of successful road tests over five months. According to the ministry, the tests—which involved driving 11 B30-powered vehicles for a distance of 50,000 kilometres—found that these vehicles consumed more fuel but yielded higher power and had generally lower emission levels than B20-powered vehicles. However, the ministry also noted that vehicle engine filters will need to be changed more frequently when using B30.