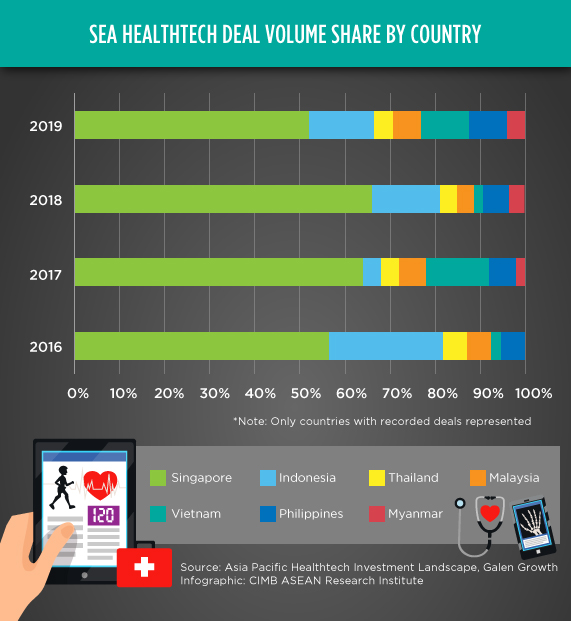 Healthtech investments in Southeast Asia reach US$266m in 2019
(11 January 2020) Southeast Asia recorded a total of US$266 million in healthtech investments in 2019, with Singapore and Indonesia capturing around 93% of the total funding value, according to a report by a Singapore-based advisory firm. The amount is 2.25 times higher than the total of US$118 million in investments received in 2018. In terms of deal volume share, Singapore kept its lead with a 54% share, followed by Indonesia which tripled its deal volume share to 15%. The healthtech categories that received the most funding by value in Southeast Asia were health management solutions, patient solutions, medical diagnostics, medical education, and population health management.

Vietnam proposes 14 initiatives for ASEAN 2020
(15 January 2020) Vietnam, as ASEAN Chair for 2020, proposed 14 initiatives, priorities and specific cooperation plans that were discussed with ASEAN member states at the first meeting of the ASEAN senior economic officials for the 51st ASEAN Economic Ministers’ Meeting held in Hanoi from 12-14 January. The initiatives were built around ASEAN’s 2020 theme, “Cohesive and Responsive,” which prioritises three areas under the ASEAN economic pillar: promoting intra-ASEAN economic integration and connectivity, intensifying partnerships for peace and sustainable development, and enhancing ASEAN’s adaptive capacity and operational efficiency. Vietnam has collected the suggestions on the proposals from participants of the meeting and will submit them to the ministers for approval.

The Philippines’ economy expected to accelerate to 6.6% in 2020
(14 January 2020) The Philippines’ economy is expected to improve in 2020, rising from 6.2% growth in 2019 to 6.6% in 2020. This projected increase in growth is attributed to stronger consumer spending, growing tourism, and easing monetary conditions. The government is committed to spend aggressively on infrastructure until the end of 2020, which is expected to boost consumer spending. The country’s central bank, Bangko Sentral ng Pilipinas, is also expected to cut reserve requirement by 1-2% and potentially reduce the policy rate by 50 basis points from current levels, according to a local investment bank spokesperson. The reserve requirement currently stands at 14%.

Malaysia, Singapore committed to concluding RTS Link agreement by April 2020
(10 January 2020) Malaysia and Singapore are committed to concluding the agreement on the Johor Bahru-Singapore Rapid Transit System (RTS) Link project by April 2020, according to Malaysia’s Transport Minister Anthony Loke. The status of the RTS Link project looked uncertain after the 2018 Malaysian general elections as the then new government embarked on a review of agreements signed by the previous administration and in November 2019, Malaysia suspended the RTS Link project for the third time. Upon completion, RTS Link will connect Bukit Chagar in Johor Bahru to Woodlands in Singapore, ferrying 10,000 passengers per hour each way and is expected to ease traffic congestion on the Causeway. The project, which was meant to be completed in 2024 is now behind schedule.

Malaysia considering breaking up state-controlled firms to foster more competition
(15 January 2020) The Malaysian government has stated that it is considering divesting its “golden shares” in state-owned firms in order to foster more transparency and competition in the economy, as well as allow more participation by private investment. A golden share allows the government to outvote all other shareholders on certain matters, such as the appointment of chief executive officers. The Malaysian government said it will look at each company on a case-by-case basis but analysts warned that efforts to overhaul state-owned firms may also trigger upheaval in the market if not done through proper consultation with stakeholders and given enough time. The government’s move of slashing broadband prices after the May 2018 election has caused state-owned telecom operator Telekom Malaysia Berhad to lose almost US$1 billion in market value since May 2018.

Thailand avoids US ‘currency manipulator’ tag
(14 January 2020) Thailand has avoided being included in the latest watch list of “currency manipulators” issued by the US Treasury. In the 12 months through November 2019, Thailand’s goods trade surplus with the US passed the US$20 billion mark while its current surplus account exceeded 2% of its GDP, according to US government data. However, the Thai baht’s almost 9% rise against the US dollar last year means “no one should consider Thailand as one that has tried to manipulate” its exchange rate to gain an export advantage, said the country’s central bank governor in an interview on 8 January. Ten countries that are possibly using their exchange rates to gain an export advantage over the US were listed in the semi-annual report released on 13 January. Three ASEAN countries, Singapore, Malaysia, and Vietnam, remained on the list from May 2019.

Myanmar economic growth expected to reach to 6.4% in fiscal year 2019/2020
(15 January 2020) The World Bank expects economic growth in Myanmar’s fiscal year 2019/2020 to rise to 6.4%, up from 6.3% in 2018/2019 and 6.2% in 2017/2018. The projected growth was attributed to increasing government investment in transportation and communication. A larger inflow of FDI into construction is also expected to boost growth. Other expected growth sectors include tourism, the services sector, and agriculture. However, pressure on core inflation is expected to intensify this year due to higher electricity tariffs and an ongoing power shortage.

Indonesia’s stock market to overtake Thailand’s as the largest in Southeast Asia
(16 January 2020) Indonesia’s stock market is poised to overtake Thailand as Southeast Asia’s largest equity market by market valuation. Indonesia’s stock market gained 5.5% in US dollar terms in the last three months to reach US$529 billion, nearly matching the market value of Thailand’s which took the top spot from Singapore in May 2019. Before 2019, Singapore’s equity market had been the region’s leader for the vast majority of the time since 2003. The growth of the Indonesian bourse was attributed to President Joko Widodo’s infrastructure projects, political landscape, and reforms.

Abu Dhabi Crown Prince and former British PM to chair panel on construction of new capital
(14 January 2020) Indonesia nominated Abu Dhabi’s Crown Prince Mohammed Bin Zayed Al Nahyan, former British Prime Minister Tony Blair, and SoftBank Chief Executive Officer Masayoshi Son for a panel to advise the government on the building of a new capital city in east Kalimantan province on the island of Borneo. The panel is also intended to provide confidence to prospective investors. The new capital is expected to cost around US$34 billion, and 80% of the cost will be covered by private investors and state-owned corporations. Civil servants will start moving into the city in phases starting in 2024, and the eventual population of the city is expected be about 6-7 million.