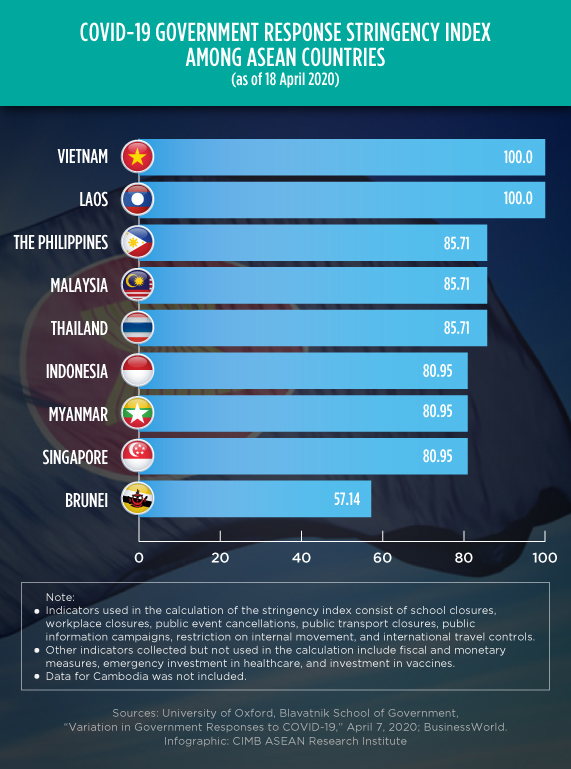 ASEAN-5 countries projected to grow in 2021
(20 April 2020) Vietnam and Laos lead ASEAN countries with a score of 100 as of 18 April, in the COVID-19 Government Response Stringency Index published by the University of Oxford’s Blavatnik School of Government. The two countries are followed by the Philippines, Malaysia and Thailand which share the same score of 85.71. Brunei, which has among the lowest cases of COVID-19 in the region comes in the last spot with a score of 57.14. The scores are based on measurements of seven response indicators, which include school and workplace closures, travel bans, public event cancellations, public transport closures, public information campaigns and movement restrictions. The Blavatnik School of Government notes that a higher position in the index does not necessarily mean that a country’s response is “better” than others lower on the index and that the index was released to help decision makers and public health professionals examine the robustness of government responses

Dialogue partners working towards signing of RCEP in Vietnam in late 2020
(18 April 2020) Dialogue partners of the Regional Comprehensive Economic Partnership (RCEP) are advancing the review of legal texts, with an expectation of the process to finish in July 2020 so that the pact can be signed at the ASEAN Summit in Vietnam in late 2020 as scheduled, according to Auramon Supthaweethum, director-general of the Trade Negotiations Department under Thailand’s Ministry of Commerce. The working panel handling the legal text-scrubbing for the pact has already finished six chapters and is working on the remaining 14 chapters. The next video conference of the RCEP Trade Negotiation Committee is scheduled for 20-24 April. The agreement has been scheduled for official signing in 2020, and is expected to come into force either in 2021 or January 2022. Auramon said signing the RCEP is crucial to the region, especially with the pandemic delivering a heavy blow to the world’s economy.

Brunei considers cutting oil output in line with OPEC+ pact
(22 April 2020) Brunei will review cutting its oil output in view of its cooperation with OPEC, second minister of finance Mohd Amin Liew Abdullah said on 21 April. This comes after OPEC and allies led by Russia, a group known as OPEC+, agreed on 12 April on historic production cuts that could curb global supply by up to 20% and prop up oil prices. According to Amin, the government is in discussions with Brunei Shell Petroleum and OPEC to see how it can help stabilise the global oil market. Since the COVID-19 outbreak began, global fuel demand has fallen by 30%, as steps to fight the pandemic have grounded planes, cut vehicle usage and curbed economic activity. However, the second finance minister was optimistic Brunei could still offload its oil shipments.

Malaysian bonds one of Asia’s top performers, but oil prices may weigh on them
(24 April 2020) Malaysia’s bonds have been one of Asia’s top performers behind the Philippines in April 2020, with the yield on the benchmark 10-year security dropping by 40 basis points. Demand for Malaysian government debt has been boosted by expectations that the central bank will lower its overnight policy rate by at least another 25 basis points in the coming months to help cushion the impact of COVID-19. However, the slump in oil prices may weigh on bond prices, with Malaysia deriving some 20% of its revenue from the energy market. The government is forecasting a deficit of about 4% of GDP in 2020.

Indonesia to restrict all passenger travel starting 24 April to prevent Idul Fitri exodus
(24 April 2020) The Indonesian government will restrict all passenger travel starting on 24 April as the government attempts to prevent the Idul Fitri tradition of mudik (exodus) to contain the spread of COVID-19. The ban will not apply to the transportation of cargo nor vehicles serving special purposes such as ambulances and fire trucks. The ban will apply to vehicles entering and leaving regions that had imposed large-scale social restrictions and those that had been declared COVID-19 red zones. Air transportation to domestic and international destinations will be stopped until 1 June, while restrictions on land transport will last until 31 May. All train services until 15 June will be cancelled, while passenger transportation by sea will be suspended until 8 June.

Government to provide interest subsidy for small business borrowers
(22 April 2020) The Indonesian government announced that it will provide interest subsidies for small business borrowers in banks and finance companies to help them cope with the effects of the COVID-19 pandemic. According to finance minister Sri Mulyani Indrawati, the government, the Financial Services Authority (OJK) and Bank Indonesia (BI) were currently finalising the regulations in response to President Joko Widodo’s call for financial assistance for small businesses. The subsidy will be designed for individuals as well as micro, small and medium enterprises (MSMEs) with the financing capped at US$32,269 (Rp 500 million), which is the credit limit in the government’s microcredit programme (KUR). Cooperatives and Small and Medium Enterprises Ministry acting finance deputy Hanung Harimba Rachman estimated that 70% of the total existing KUR entities will be able to join a business restructuring programme with the government’s interest subsidy.

Finance Ministry to issue promissory notes worth US$2.2 billion
(23 April 2020) Thailand’s Finance Ministry will issue promissory notes (PN) worth US$2.2 billion (70 billion baht) as the first batch of borrowing under the US$30.8 billion (1 trillion baht) royal decree to mitigate the impact from the COVID-19 outbreak and the government’s containment measures. The Public Debt Management Office (PDMO) initially planned to offer 70 billion baht worth of PNs with maturity of four years based on the Bangkok Interbank Offered Rate (Bibor), which stood at 0.97%. The PDMO will allow commercial banks to make the bidding on 28 April, according to PDMO director-general Patricia Mongkhonvanit. The proceeds obtained from the PNs will be used to fund the US$154 (5,000 baht) cash handout in its second month and the ministry must receive the raised funds before 5 May to add to treasury reserves

World Bank approves US$100 million loan to the Philippines
(23 April 2020) The World Bank has approved a US$100 million loan to the Philippines for its COVID-19 emergency response project to help meet urgent healthcare needs. The project will help strengthen the country’s healthcare delivery system for critical medical services in the face of increased demand in the coming months. According to the World Bank, the project will focus on providing personal protective equipment (PPE), drugs, medical supplies, medical devices, laboratory equipment, and test kits. Apart from that, the response project will also support the Department of Health in preparing guidance on standard design for hospital isolation and treatment centres to manage COVID-19. The expansion of the Philippines’ laboratory capacity will also be funded by the project.

New factories opened in the first quarter of 2020 despite COVID-19 pandemic
(23 April 2020) A total of 77 new factories, including 34 garment, footwear, and travel goods factories, opened in Cambodia in the first quarter of 2020 despite the COVID-19 pandemic. According to the Ministry of Industry, Science, Technology, and Innovation, the new factories created jobs for 27,909 people. Although many factories have seen a drop in purchasing orders, it is believed demand will resume once the pandemic passes. Most of the garment, footwear and travel goods factories continued to operate due to constant supply of raw materials from China, with only six factories having permanently shut down during the quarter affecting some 6,052 workers. Cambodia’s exports of garment, footwear, and travel goods in 2019 was valued at US$9.32 billion, accounting for over 83% of the country’s total industrial product exports.