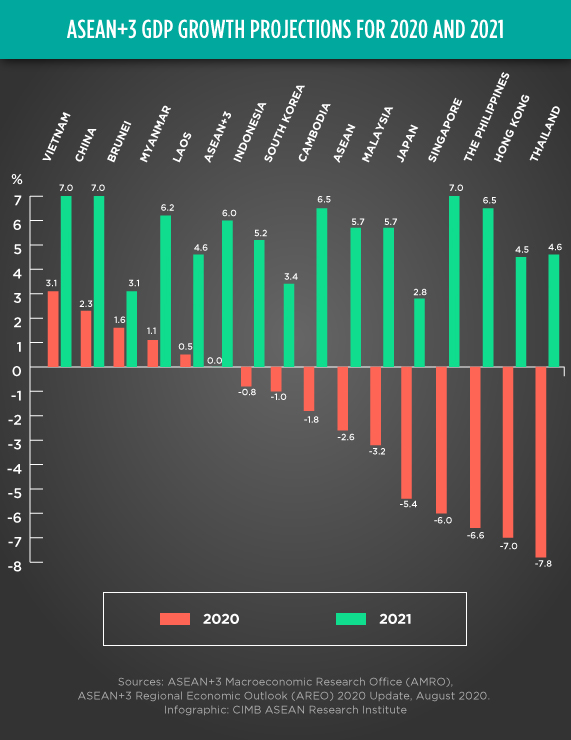 ASEAN+3 region forecasted to grow 6.0% in 2021
(6 August 2020) Economies in the ASEAN+3 region are expected to rebound in 2021, according to a report released by the ASEAN+3 Macroeconomic Research Office (AMRO) on 6 August. The ASEAN+3 region comprises the 10 member states of the Association of Southeast Asian Nations (ASEAN), and Hong Kong, China, Japan, and South Korea. All ASEAN+3 economies are projected to return to positive growth averaging 6.0% in 2021 with ASEAN forecasted to grow 5.7%. The recovery in ASEAN+3 region is anticipated to be led by China, which is projected to grow by 2.3% in 2020 compared to 6.1% in 2019. Nine of the 14 ASEAN+3 members are expected to contract in 2020, with Thailand having the deepest contraction of 7.8%. In 2020, the ASEAN region is forecasted to contract by 2.6%, from a positive growth of 4.6% in 2019. The smaller economies of Brunei, Laos, Myanmar, and Cambodia, are expected to weather the COVID-19 pandemic better than their larger peers.

Garment workers including those in Southeast Asia lose close to US$6 billion in wages due to COVID-19 pandemic
(11 August) Garment workers supplying global fashion brands have either been underpaid or not paid at all during the COVID-19 crisis, researchers said on 11 August. Garment workers worldwide are estimated to have lost US$3.19 billion to US$5.79 billion in the first three months of the pandemic. In Bangladesh, around US$500 million in wages is estimated to have been withheld while in Indonesia, the withheld amount is estimated at around US$400 million. Pressure group Clean Clothes Campaign said a lack of data limited the research to seven countries, Bangladesh, Cambodia, India, Indonesia, Myanmar, Pakistan and Sri Lanka, but said the situation was probably similar in other low-wage regions. The group added that garment workers in South and Southeast Asia, had only received three fifths of their regular income on average from March to May 2020.

Cambodia’s PPE exports jump 130% in the first half of 2020
(9 August 2020) Cambodia exported just over US$191.3 million worth of personal protective equipment (PPE) in the first half of 2020, a 130% rise from the US$83.3 million recorded in 2019. The exports were mainly driven by COVID-19 fears and a shortage of such equipment, according to the General Department of Customs and Excise. Face mask exports for the six months ended June 2020 were valued at US$2.5 million. However, no figure exists for the same period in 2019. Data from the Ministry of Industry, Science, Technology and Innovation show that there are seven factories and seven handicraft workshops that are either in the application process or are currently producing face masks and other PPE. Together, the factories are able to manufacture 138 million face masks, around 20.7 million medical gowns and approximately 9.6 million medical caps on a monthly basis. Government data show their export destinations include China, Japan, the US and Europe.

Thailand’s investment board to hold events aimed at achieving 4,000 pairings
(12 August 2020) Thailand’s Board of Investment (BoI) expects to help 4,000 Thai and foreign companies form business partnerships in 2020 through two international events, though the number is half of 2019’s tally due to the impact of COVID-19. The business matching is projected to create economic value worth US$226 million (7 billion baht) from the events, which have been delayed from early 2020 when the country dealt with the virus outbreak. Together with the Thai Subcon Association and event organiser Informa Markets, BoI will co-organise Subcon Thailand, ASEAN’s largest international industrial subcontracting, in conjunction with Intermach, a showcase of innovative machinery scheduled to be held in September. According to the Industrial Linkage Development Division, it helped facilitate 8,029 business matches, creating more than US$451 million (14 billion baht) in business value in 2019.

Central bank purchases US$16.4 billion of government debt
(12 August 2020) The Philippines central bank, Bangko Sentral ng Pilipinas (BSP), has purchased around US$16.4 billion worth of government debt through the end of July 2020, in order to finance the country’s record stimulus measures. This was equivalent to 45% of the Philippines domestic borrowings. Around US$10.2 billion of the total purchases were in the secondary market, while the remainder was directly from the government. An economist stated that the debt-purchase programme by BSP will most likely continue beyond 2020 given the economic conditions. Filipino bonds are the top performers in Asia as of now, with 18% returns. Yields on 10-year bonds have fallen to 2.78% from more than 5% in March 2020.

Indonesia raises US$1.48 billion from government bonds to fund fiscal deficit
(12 August 2020) The Indonesian government raised US$1.48 billion on 11 August 2020, from government bonds to fund the country’s fiscal deficit and COVID-19 measures. The Finance Ministry received bids for US$7.2 billion from both domestic and foreign investors as well as Indonesia’s central bank, Bank Indonesia. The bids received was the second-highest volume of bids so far in 2020, with foreign investors making up 33% of the incoming bids. The maturity periods of the bond series varies from three months to 28 years, with yields ranging from 3.25% to 7.40%, respectively. The government plans to raise US$66.7 billion in the second half of 2020 to cover a fiscal deficit of 6.34% of GDP. The government has allocated US$47 billion for the country’s COVID-19 response, which includes strengthening the healthcare system and reviving the economy. This is the first time the central bank has bought sovereign debt papers to support the financing of non-public goods.

Government to ratify bill to boost job creation by end-August 2020
(11 August 2020) The Indonesian government is hopeful a job creation bill will be ratified by parliament by the end of August 2020, amidst worries of a recession due to the COVID-19 pandemic. The Job Creation Bill will allow employers to hire and fire workers with lower severance pay and benefits compared to current labour laws, as well as allow employers to hire workers on flexible work hours (thereby avoiding paying full-time wages). COVID-19 has caused some 3.7 million people to lose their jobs, raising the estimated total number of unemployed Indonesians to 10.6 million, equivalent to almost 8.0% of its working population. Indonesia’s economy shrank by 5.32% year-on-year between April and June 2020, its first negative quarterly performance in 21 years. Six out of the country’s eight major labour unions have agreed to support the bill. However, labour union KSPI said the bill does not recognise minimum wage and makes it easier for companies to retrench their staff.

The Philippines cancels Myanmar rice consignments due to local protests
(12 August 2020) Singapore’s central bank warned that the country’s financial services sector may see more retrenchments in the second half of 2020, as the economy faces a contraction of between 5.0%-7.0% in 2020. The Monetary Authority of Singapore stated that financial institutions in Singapore “held up well” in the first half of 2020; with 1,500 jobs created while retrenchment levels staying “subdued.” The financial sector employs more than 170,000 people and contributes 13.0% to the GDP. The central bank has prioritised supporting the local workforce in the financial sector, as the sector undergoes a shift towards new models including digital banking.

Laos sees rising public debt following economic impact of COVID-19
(10 August 2020) Laos is seeing a rise in public debt after a drop in revenue collection and an increase in loans amid the COVID-19 pandemic. According to a government official quoted by a Chinese daily, Laos’ public debt could rise to as much as 65% to 68% of GDP in 2020. At the recent ninth ordinary session of the National Assembly’s eighth legislature, Minister of Finance Deputy Prime Minister Somdy Douangdy said Laos’ revenue collection is expected to fall by around US$696 million (LAK 6.322 billion). The value of exports during the first six months of 2020 was at a reduced level of around US$2.6 billion, down by 5.1% compared to the same period in 2019 based on an assessment done by an agency under the Ministry of Industry and Commerce. The tourism sector is also expected to be affected in the second half of 2020 after recording a 60% decline in tourist arrivals in the first six months of 2020.

Brunei and Malaysia added to the UK’s travel corridor list of nations
(12 August 2020) Malaysia and Brunei were added on 11 August 2020 to the UK’s travel corridor list of nations, meaning arrivals from both countries will not be required to self-isolate upon arrival in the UK. Travellers from both countries who arrive in the UK before 4:00 AM (GMT) on 11 August 2020 will still be required to self-isolate. Malaysia’s borders remain closed, however, with locals still barred from travelling abroad. Other Asian countries on the exempt list included Japan, South Korea, Taiwan and Vietnam, as well as the special administrative regions of Hong Kong and Macau.