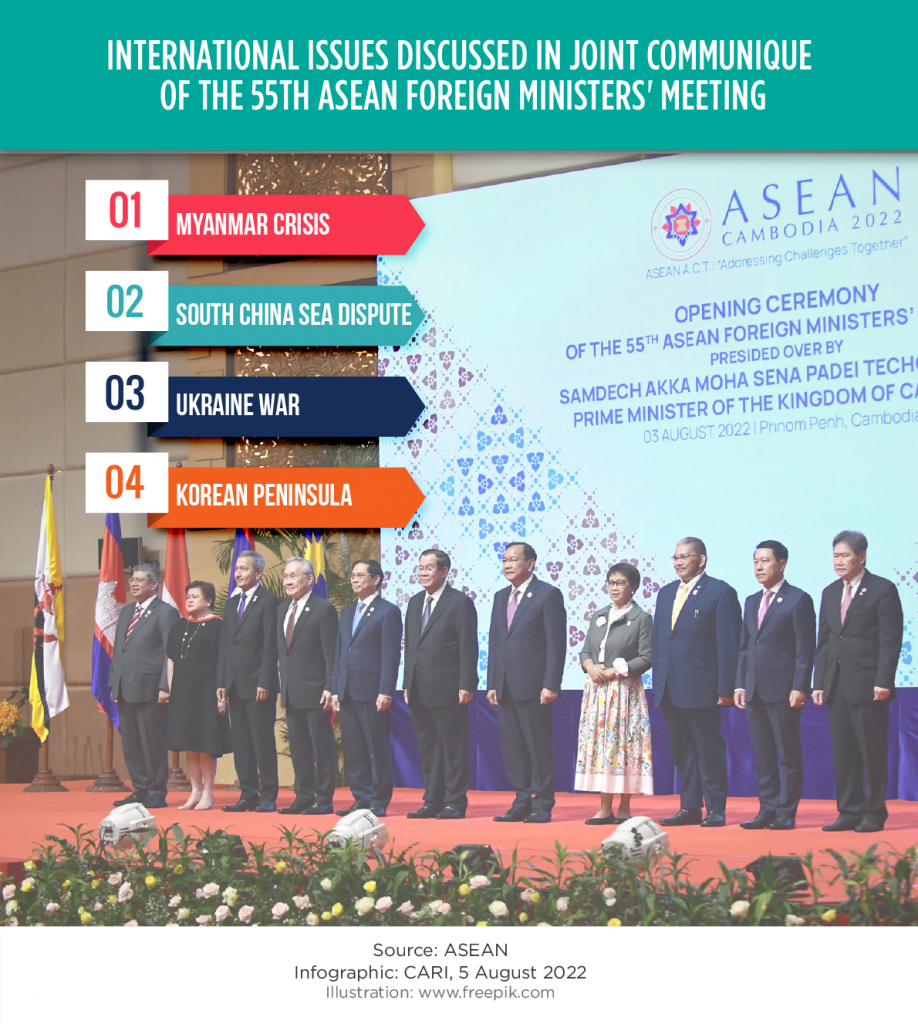 ASEAN
Joint Communique of ASEAN Foreign Ministers’ Meeting mentions Myanmar and Ukraine
(03 August 2022) On 03 August 2022, the Joint Communiqué of the 55th ASEAN Foreign Ministers’ Meeting was released, which among other things discussed ASEAN’s position on several major international issues. Among the topics brought up by the Communique included the South China Sea dispute, developments on the Korean Peninsula, the Myanmar crisis, and the war in Ukraine. With regards to the Myanmar crisis, the bloc noted it was ‘deeply disappointed’ by the limited progress and lack of commitment by the Myanmar government towards the complete implementation of the Five Point Consensus. The bloc also warned that the ASEAN Summit may make a ‘decision’ in the event of a ‘serious breach of the Charter or non-compliance’. With regards to the war in Ukraine, ASEAN stated its respect for ‘sovereignty, political independence, and territorial integrity’, and called for an immediate cessation of violence.

INDONESIA
Headline inflation accelerates to highest level in seven years at 4.94% in July 2022
(01 August 2022) Inflation in Indonesia accelerated to its highest level in seven years at 4.94% in July 2022. The July inflation rate was the highest since October 2015. However, core inflation, which omits government-controlled prices and volatile food prices, remained within the target of the central bank at 2.86%, rising from 2.63% in June 2022. Bank Indonesia’s target range for headline inflation is between 2% to 4%, although Indonesian policymakers have stated that they prefer to base monetary policy on core inflation. The central bank has sought to unwind some of its COVID-19 pandemic stimulus, including through raising banks’ reserve requirement ratio and selling some of its bond holdings. Bank Indonesia has kept its benchmark rate at a record low of 3.50% since February 2021.

SINGAPORE
Over 500 high-net worth Chinese nationals expected to relocate to Singapore bringing estimated US$2.4 billion capital inflows
(04 August 2022) London-based investment migration consultancy Henley & Partners estimates that over 500 high-net worth (HNW) Chinese nationals are expected to relocate to Singapore in 2022, bringing with them at least US$2.4 billion worth of capital inflows to the city-state. The consultancy predicts that more than 10,000 HNW individuals will be on the lookout for opportunities to migrate from China in 2022. Based on past data, the top destinations these Chinese HNW individuals tend to migrate to include the US, Canada, Australia, UK and Singapore. An increasing number of Chinese nationals have set up family offices in SIngapore over the past few years, with Singapore media outlet Business Times recently reporting that close to 44% or 63 out of 143 new family offices in Singapore have originated from China as of April 2022.

BRUNEI DARUSSALAM, SINGAPORE
Brunei Crown Prince Al-Muhtadee Billah leads delegation to Singapore from 02 to 04 August
(02 August 2022) Brunei’s Crown Prince Al-Muhtadee Billah is leading a delegation to Singapore to attend the 8th Singapore-Brunei Young Leaders’ Programme this week. His visit will be between 02 to 04 August. The programme was launched in 2013, and provides a key platform for young leaders from both countries to meet and build ties with one another. Crown Prince Billah also serves as Senior Minister at Brunei’s Prime Minister’s Office. Both sides intend to discuss ways to strengthen bilateral ties over the coming years during the visit. Singapore and Brunei Darussalam have long standing arrangements such as the Currency Interchangeability Agreement, and also cooperate extensively in areas such as defence, finance, trade and investment, tourism, health, aquaculture and education.

THAILAND
Rebound in tourism to see Thailand’s economy to expand by 4.2% in 2023
(02 August 2022) A faster than expected rebound in tourism will see Thailand’s economy expand by 4.2% in 2023, setting Southeast Asia’s second largest economy on course to return to pre-pandemic growth next year. The economy is also expected to grow by 3.3% in 2022. Thailand recently eased COVID-19-related travel curbs, waived visa requirements and relaxed business restrictions to lure international travelers, with soaring inflation having derailed the post-pandemic recovery in domestic consumption and investments. About 6 million visitors are expected to visit Thailand in 2022, with the vast majority expected to visit in the latter half of the year. The number of visitors should rise to 19 million in 2023. Retail inflation in Thailand jumped 7.66% in June 2022 from a year earlier, a 14-year high, boosted by surging energy costs.

THAILAND
Thailand to introduce 10-year visa for skilled workers and investors in September 2022
(04 August 2022) Thailand will introduce a 10-year visa for skilled workers and investors in September 2022, as the country aims to attract some one million people from Japan and other advanced economies over the next five years. The introduction of the long-term visa is expected to make certain sectors such as automobiles, electronics and biotechnology more competitive. Thailand is looking for foreign experts who belong to companies or research institutions that are involved in more than ten industrial or technological categories including electric vehicles, electronics, medicine and defense. Workers employed by foreign companies who wish to work in Thailand remotely can also apply for the new visa program. The new visa will be Thailand’s third visa aimed at attracting highly skilled professionals or investors.

MALAYSIA
Malaysia to allow resumption of chicken exports due to oversupply of chicken
(01 August 2022) The Malaysian government is set to resume chicken exports due to the current oversupply of chicken within the country. According to Malaysia’s Minister of Agriculture and Food Industries, Malaysia has been able to produce 106% of its chicken needs, meaning the country has the capacity to export. Malaysia halted the export of chicken in June 2022 to cool rising local prices and ensure sufficient domestic supplies. This particularly affected Singapore, which imports a third of its chicken supply from Malaysia. Given the current oversupply of chicken, the market price of chicken is lower than the maximum price set by the government. Malaysia’s food inflation rate accelerated to 6.1% year-on-year in June 2022, its highest level since 2011 according to data by Bloomberg.

SOUTH KOREA
Consumer price index rises to 6.3% year-on-year in July, highest since November 1998
(02 August 2022) The consumer price index (CPI) in South Korea rose by 6.3% year-on-year in July 2022, marking the highest rate of inflation since November 1998. The CPI rose by 6% in June 2022. On a monthly basis, the index rose 0.5 percent last month, down slightly from a 0.6 percent gain in June. The new inflation data comes as the Bank of Korea mulls further interest rate hikes at its next policy meeting on 25 August. The South Korean economy grew by 2.9% year-on-year in the second quarter of 2022, a faster gain than expected, providing the central bank with more breathing room compared to its peers. More modest rate hikes are expected by the Bank of Korea in the future.

AUSTRALIA
Trade surplus rises to US$12.3 billion in June 2022, hitting fresh record high
(05 August 2022) Australia’s trade surplus hit a fresh record high of US$12.3 billion in June 2022, driven by strong prices of key exports from grains to metals and gold. Australian exports rose by 5% in June 2022, while imports rose 1% as more Australians traveled overseas for holiday. Australia has posted monthly trade windfalls for four and a half years, underpinned by the sale of iron ore and coal. Being a key exporter of liquefied natural gas, Australia has benefited from surging fuel prices due to the war in Ukraine, alongside other commodities such as wheat. According to official data, earnings from metals jumped 27% in June while cereal and grains climbed 21.1%.

NEW ZEALAND
Unemployment unexpectedly rises from record low to 3.3% in second quarter
(04 August 2022) New Zealand’s unemployment rate unexpectedly rose from a record low to 3.3% in the second quarter. The jobless rate climbed from 3.2% in the first quarter, which was the lowest level since records began in 1986. Wages also rose at the fastest pace in 14 years, accelerating to 3.4%, the fastest since 2008. Labor shortages and capacity constraints have contributed to soaring inflation, raising the pressure on the central bank to raise rates aggressively. At 7.3% in the second quarter, inflation is well in excess of the central bank’s target of 1% to 3%. New Zealand’s tight labor market has been attributed in part to the absence of migrant workers. Monetary tightening by the central bank has driven down property prices and eroded business and consumer confidence, raising the possibility of a recession.