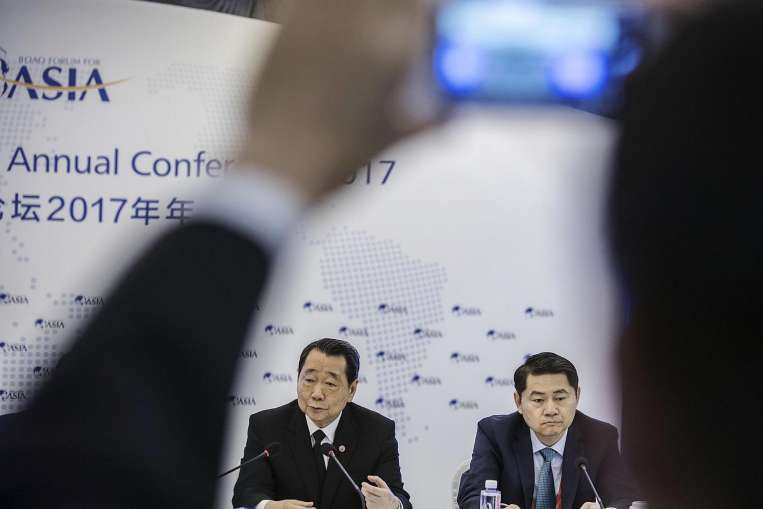 Stronger economic ties could reduce territorial disputes
At the Boao forum, which is touted to be China’s answer to the World Economic Forum in Davos, experts discussed the possibility of development projects deepening ties and integration between ASEAN and China. They believe that economic cooperation and China’s One Belt One Road initiative could have the effect of shrinking the intensity of various territorial disputes. The case of the cooperation between Thailand and Malaysia on oil and gas resources in the Gulf of Thailand since 1979 was given as an example of how countries can put aside territorial disputes in order to work together.
Source: The Straits Times (27 March 2017)

China to begin construction on stalled Indonesia railway
Indonesia’s 142km high speed railway project which has been delayed for almost a year is set to get moving again soon. China will not only be funding the project but also constructing the whole railway line in a joint venture with four indonesian state-owned firms. The JV known is known as Kereta Cepat Indonesia China. The delay was due to the lengthy land acquisition exercise undertaken by the Indonesian partners in the venture. China Development Bank could begin disbursing the loans for the project by the end of March.
Source: South China Morning Post (25 March 2017)

China-Singapore joint project in Guangzhou launched
A groundbreaking ceremony has taken place for the Sino-Singapore Guangzhou Knowledge City. The development of five neighbourhood centres will be completed in 2018. The plan includes to building a library, small theatre, multi-function hall and cultural activity centre. At the same time, the two countries also launched a platform for businesses and start-ups.
Source: The Business Times (24 March 2017)

Sino-Thai railways sees more setbacks
The 253km high speed train in Thailand may see another setback. The multi-billion-baht project may be delayed again if China fails to submit the project design documents, which include construction materials and components, in English by the end of March. If China is unable to meet this deadline the 17th meeting of the Thai-Sino panel overseeing the high-speed railway project which was due to be held in Beijing next month will be postponed again. This meeting was originally slated to take place in January.
Source: Bangkok Post (27 March 2017)

Preliminary agreement on South China Sea to be ready by May
Chinese Ambassador to Philippines Zhao Jianhua said that China is determined to work with ASEAN to come up with a framework to resolve the disputes in the South China Sea. This message was relayed to President Duterte during their meeting in Davao City last Monday. China will host a meeting with ASEAN to finalise a preliminary agreement on a framework the code of conduct (COC) for the South China Sea. Philippine Foreign Secretary Enrique Manalo has said that the earlier draft of the COC is being circulated among the 10 member states to get their sign-off.
Source: The Phil Star (29 March 2017)
Source: The Straits Times (24 March 2017)