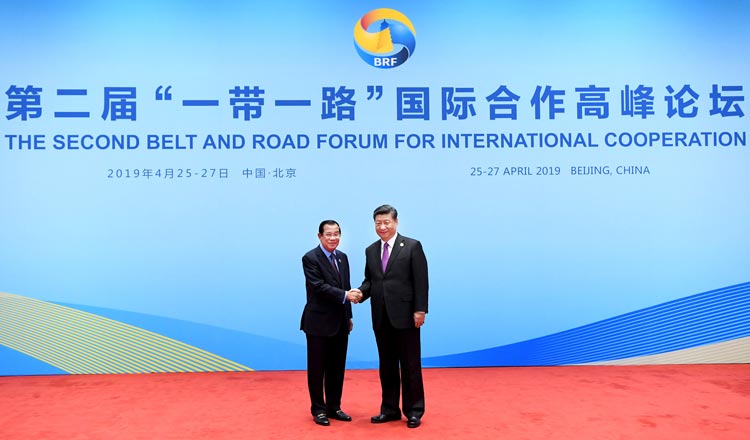 Cambodia, China ink nine agreements during the Belt and Road Forum
(28 April 2019) Cambodian Prime Minister Hun Sen and his delegation signed nine agreements during the 2nd Belt and Road Forum (BRF) held in Beijing from April 25 to 27. This included the Action Plan on Cambodia-China Community of Shared Future, Agreement on Economic and Technical Cooperation under Grant Aid, as well as memoranda of understanding (MoU) for cooperation in areas such as tax affairs, productivity capacity and investment, as well as collaboration between Cambodia’s Rectangular Strategy and China’s Belt and Road Initiative (BRI). Furthermore, China also agreed to import 400,000 tonnes of Cambodian rice and pledged to provide further support if the country does indeed lose its EU Everything But Arms (EBA) privileges. On the technological side, an MoU was also signed with Chinese tech giant Huawei to build a 5G network in Cambodia — the first ASEAN country to do so, according to Huawei Group’s regional head James Wu. Meanwhile, the Cambodian Ministry of Tourism and Bank of China signed a MoU to allow Cambodian banks to use the Chinese yuan in digital transactions through Union Pay, WeChat Pay and Alipay, in order to attract more Chinese tourists to Cambodia. According to the National Bank of Cambodia director-general Chea Serey, 15 local banks have so far received authorisation to use the yuan while another 12 have expressed interest in the scheme.
Read more>>

The Philippines, China ink trade and investment deals worth US$12.16 billion
(28 April 2019) President Rodrigo Duterte and Filipino cabinet members present at the BRF in Beijing witnessed the signing of 19 agreements with Chinese firms worth US$12.16 billion. According to the Philippines’ Department of Trade and Industry (DTI), the agreements will create 21,000 jobs in the coming years. Among the larger deals were a US$1.5 billion framework agreement for thermal, hydro and renewable power plants; a US$1.5 billion MoU to develop the Tubalan Cove Business and Industrial Park petrochemical refinery processing plant complex; a US$1.5 billion framework agreement to develop Yatai Industrial Park; a US$4 billion MoU for the construction of Manila’s Light Rail Transit, as well as housing and roads in North Luzon; and six MoUs worth US$1.9 billion for developments in the Cagayan Economic Zone. Separately, Philippine ambassador to China Jose Santiago Sta. Romana reassured reporters on April 24 that the proposed Philippines-China joint oil and gas exploration project will proceed despite ongoing diplomatic tensions between the countries in the West Philippine Sea. Nevertheless, he said, there are still “many steps” left before the parties can finalise an agreement that builds on the MoU that was signed last year.
Read more>>

Malaysia, China sign major infrastructure and investment agreements at the BRF
(29 April 2019) The Malaysian delegation led by Prime Minister Mahathir Mohamad inked three major agreements during their attendance at the BRF in Beijing. The three documents were a framework agreement formalising the revival of the Bandar Malaysia project between Malaysia and China Railway Group Ltd; an MoU to develop an industrial park and logistic hub along the East Coast Rail Link (ECRL); and a MoU to boost bilateral palm oil trade and investment, which includes a commitment from China to import at least 1.9 million tonnes of palm oil from Malaysia over a five-year period starting in 2019. Furthermore, Malaysian national carmaker Proton secured a US$455 million loan from China Construction Bank to fund its expansion plans as Proton looks to become the number one automotive brand in Malaysia and number three in ASEAN by 2027. Other private sector agreements inked during the trip included an agreement between Malaysia’s Sunsuria and China’s Sinotrans to develop a smart logistics park in Malaysia; an agreement between Sunsuria and China’s IAT Automobile to develop an ASEAN automotive design hub; MoUs between eight Chinese companies and Malaysia’s Syarikat Perumahan Negara Berhad (SPNB) to help develop Malaysia’s expertise in developing Industrialised Building Systems (IBS); and agreements between two Malaysian and two Chinese companies to import and promote durian products in China.
Read more>>

Myanmar, China sign three agreements to collaborate on infrastructure and technology
(26 April 2019) Myanmar state counsellor Daw Aung San Suu Kyi and Chinese premier Li Keqiang witnessed the inking of three agreements during the BRF held in Beijing recently. According to a statement by Myanmar’s Ministry of Information, the first agreement is a MoU that builds on the existing China-Myanmar Economic Corridor (CMEC) MoU that was signed in September last year. According to the initial MoU, the 1,700-kilometre economic corridor will connect China’s Yunnan province with Myanmar’s Kyaukphyu Special Economic Zone (SEZ) through major economic hubs such as Mandalay and Yangon. This was followed by the signing of another MoU outlining a five-year bilateral trade and economic cooperation plan, and an agreement letter outlining bilateral technological collaboration. According to the statement, both leaders also discussed maintaining Myanmar’s 100,000-tonne rice export quota to China and the implementation of BRI projects in Myanmar. However, no announcements were made regarding discussions on the controversial Myitsone dam.
Read more>>

China, Brunei to use Brunei-Guangxi Economic Corridor as an example of cooperation
(26 April 2019) Chinese President Xi Jinping and Brunei’s Sultan Haji Hassanal Bolkiah expressed their interest to further align the BRI with Brunei’s Vision 2035 development strategy during their bilateral meeting on the sidelines of the BRF in Beijing. President Xi also proposed that they use the development of the Brunei-Guangxi Economic Corridor as an “example of cooperation” and urged both sides to deepen cooperation in agriculture, aquaculture, and the halal food market. Separately, Chinese e-commerce giant JD.com announced that Brunei has opened a national store on its platform, with its first offering being blue shrimps. According to Bruneian finance and economy minister Mohd Amin Liew, its offerings on the platform marks the country’s first step in penetrating the Chinese market. He added that in the future, trade cooperation between the two countries will go beyond food to include logistics and agriculture.
Read more>>