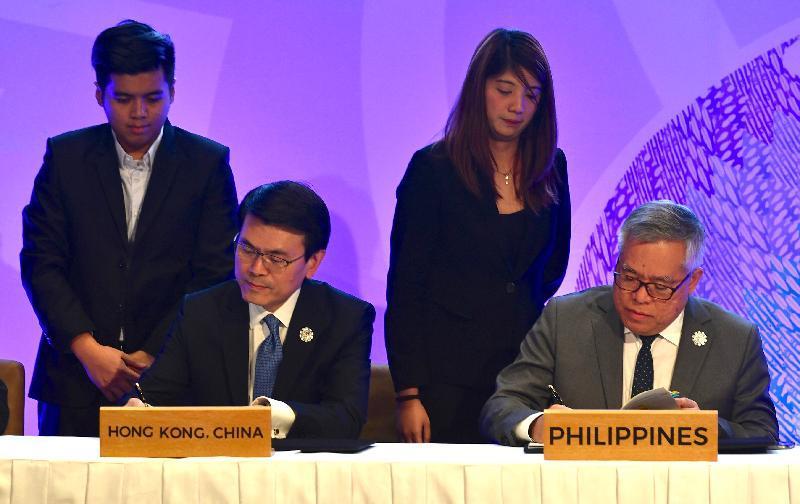 HK-ASEAN Investment Agreement to take effect for five ASEAN countries in June
(16 May 2019) The Hong Kong-ASEAN Investment Agreement (IA) will come into force in Vietnam, Thailand, Singapore, Myanmar and Laos on June 17. According to the Hong Kong Special Administrative Region (HKSAR) government, the IA will provide Hong Kong enterprises with greater investment protection, such as through clauses that require the ASEAN countries to provide compensation to Hong Kong enterprises if their investments incur losses caused by war, armed conflict or events of a similar nature. They will also enjoy the assurance of the free transfer of their investments and returns. Similarly, the measures relating to these five ASEAN countries under the Hong Kong-ASEAN Free Trade Agreement (FTA) will enter into force on June 11. Under the FTA, Singapore will remove all tariffs on imports from Hong Kong, while Laos, Myanmar, Thailand and Vietnam will also gradually reduce or eliminate tariffs on the same. Hong Kong service providers will also enjoy greater market access in selected ASEAN countries upon implementation of the FTA.
Read more>>

ASEAN, China discuss ways to bolster strategic partnership
(20 May 2019) The ASEAN-China Senior Officials’ Consultation was held in Hangzhou on May 19 with the aim of reviewing existing cooperation mechanisms and partnerships, and prepare for the upcoming ASEAN-China post-ministerial conference scheduled to be held in August. Among the outcomes of the meeting were pledges to continue advancing the ASEAN-China Strategic Partnership Vision 2030 and the ASEAN-China Plan of Action 2016-2020. In addition, both sides aim to achieve US$1 trillion in bilateral trade and US$150 billion in bilateral investment by 2020. Furthermore, they also agreed to bolster cooperation in the areas of digital economy, e-commerce, cyber security, connectivity, infrastructure, transportation, agriculture, innovation, small and medium enterprise (SME) development, Greater Mekong Subregion development, and the Regional Comprehensive Economic Partnership (RCEP) negotiations. China also presented cooperation proposals in terms of smart city development, as well as through China’s Belt and Road Initiative (BRI) and ASEAN’s own development plans.
Read more>>

The Philippines sees greater investment from China
(21 May 2019) The Philippines has been able to attract more investors from China amid the US-China trade war, according to its Department of Trade and Industry (DTI). Trade secretary Ramon M. Lopez was quoted by Business World as saying that they have attracted “almost US$1 billion” in investments from Chinese investors, up from the “very small” amount of “only US$50 million a year” previously (the exact period was unspecified). However, the Philippines Economic Zone Authority head Charito B. Plaza noted that delays in streamlining the country’s investment incentives such as the removal of perks that the government deemed redundant have been keeping investors away. Furthermore, the Foundation for Economic Freedom (FEF) released a statement urging the government to do more to attract Chinese factories to relocate to its shores by expediting the enactment of laws to lower corporate income tax rates, streamline fiscal incentives and lower barriers to foreign ownership and participation in sectors such as public transportation and telecommunications.
Read more>>

Trade war gives Thailand a chance to lure more Chinese tourists
(21 May 2019) Thailand is keeping an eye on the implications that the US-China trade war may have on tourism as it hopes to lure more tourists from China. For instance, it foresees a possibility that the Chinese government may issue a travel ban to the US if the trade war intensifies, similar to the travel ban it imposed on South Korea and Japan when China had diplomatic tensions with these countries. According to the Tourism Authority of Thailand (TAT) governor Yutthasak Supasorn, studies conducted by five TAT offices in China found the trade war and depreciating yuan to be the primary factors deterring Chinese citizens from taking overseas trips and spending during such trips. As such, the TAT hopes to entice more Chinese visitors through incentives such as e-visas, wavers of visa-on-arrival fees, as well as upcoming deals with China Travel and Alipay which are expected to bring in at least two million Chinese tourists respectively. Last year, around 10.5 million Chinese tourists visited Thailand, and the number is estimated to reach 11.6 million visitors this year.
Read more>>

Cambodia looks to attract more high-income Chinese tourists
(20 May 2019) Cambodia needs to become a five-star destination in order to attract “five-star Chinese tourists,” says Cambodia Association of Travel Agents head Chhay Sivlin. According to her, Cambodia has done well to attract more Chinese tourists over the years, but it needs to do more to attract high-income visitors in order to boost revenue for the sector. Cambodian Ministry of Tourism spokesperson Top Sopheak, for his part, said that every country was working hard to attract more Chinese tourists, and Cambodia still has much to do to respond to the growth of Chinese tourists. At the Asian Culture and Tourism Exhibition held in Beijing on May 16, Cambodian Minister of Tourism Thong Khon said the government plans to accommodate the rise in tourists through infrastructure projects such as the development of new airports in Phnom Penh and Siem Reap, the expansion of the airport in Preah Sihanouk province and a tourism port in Kampot province. According to Sopheak, foreign visitors generally stay for four to seven days, and spend between US$200 to US$300 per day. In the first three months of 2019, Chinese tourists numbered more than 680,000, a 35% jump compared to the same period last year.
Read more>>