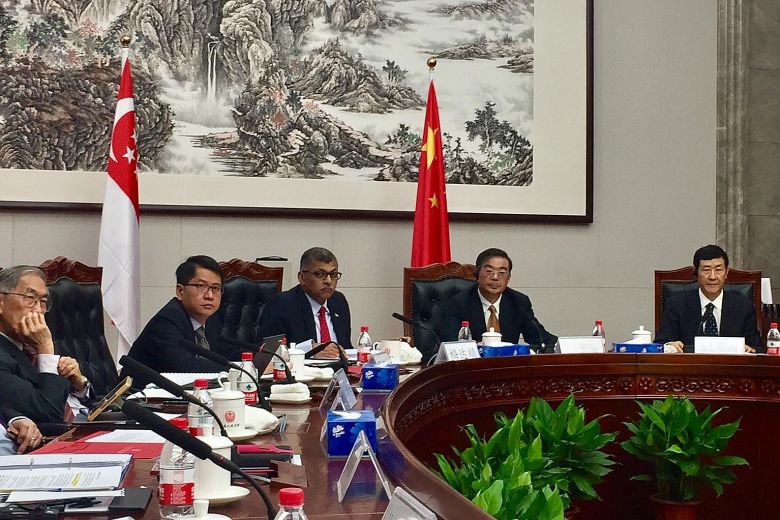 Singapore, China to cooperate on legal and judicial matters
(22 August 2017) Singapore and China have extended their bilateral cooperation on legal and judicial matters with top legal officials from both countries meeting in Beijing at the inaugural Singapore-China Legal and Judicial Roundtable. Singapore Chief Justice Sundaresh Menon and his Chinese counterpart Zhou Qiang signed a memorandum of understanding on the cooperation. Chief Justice Menon believes that the cooperation will provide confidence for businesses and individuals on the legal and judicial mechanism to resolve disputes that are likely to arise with increasing commercial cross-border activities between the countries.
Read more>>

Thai-China railway will begin construction in October
(20 August 2017) According to a statement released by the Chinese Embassy in Bangkok, Thailand and China are aiming to sign contracts on the first phase of the railway in September. Construction of the first phase of the Thailand-China railway is expected to start in October 2017. The 253km railway linking Bangkok and northeastern province of Nokorn Ratchasima will have six stations along the route. The second phase will connect to the China-Lao railway and is also expected to start soon. The Chinese side will be responsible for the design work and supervision, while the Thais will be responsible for construction work.
Read more>>

Singapore urges US and China to prevent trade war
(22 August 2017) Foreign Minister of Singapore Vivian Balakrishnan called on the United States and China to prevent a trade war and urged nations to stop protecting obsolete professions. Balakrishnan said that trade has changed due to the digital revolution and encourages both the nations to cooperate to create a zone of interdependence and mutual investment. Singapore is currently one of the world’s most trade-reliant economies with its exports amounting to twice its gross domestic product. The government also highlighted that rising trade protectionism is among the key risks to the country’s economic outlook.
Read more>>

Philippines does not stop China from patrolling in disputed area
(22 August 2017) Philippines President Rodrigo Duterte will not stop China from patrolling around Sandy Cay located within the country’s exclusive economic zone in the South China Sea. According to Supreme Court Associate Justice of the Philippines Antonio Carpio, two Chinese frigates, a Coast Guard vessel and two military fishing boats were spotted around Sandy Cay. Duterte responded by saying that he had China’s assurance that they will not occupy or build anything in the area. However, satellite pictures provided by the Asia Maritime Transparency Initiative of the Center for Strategic and International Studies showed continued reclamation activities in the area by China.
Read more>>

China, Indonesia strengthen comprehensive strategic partnership
(22 August 2017) China and Indonesia pledged to strengthen their comprehensive strategic partnership at the sixth vice-premier-level-dialogue in Beijing. China’s State Councillor Yang Jiechi urged both countries to implement agreements made by their leaders as both countries are ready to work together. Both parties have agreed to maintain high-level visits and communication on important issues and cooperate in areas including national defence, law enforcement, anti-terrorism and Belt and Road Initiative.
Read more>>