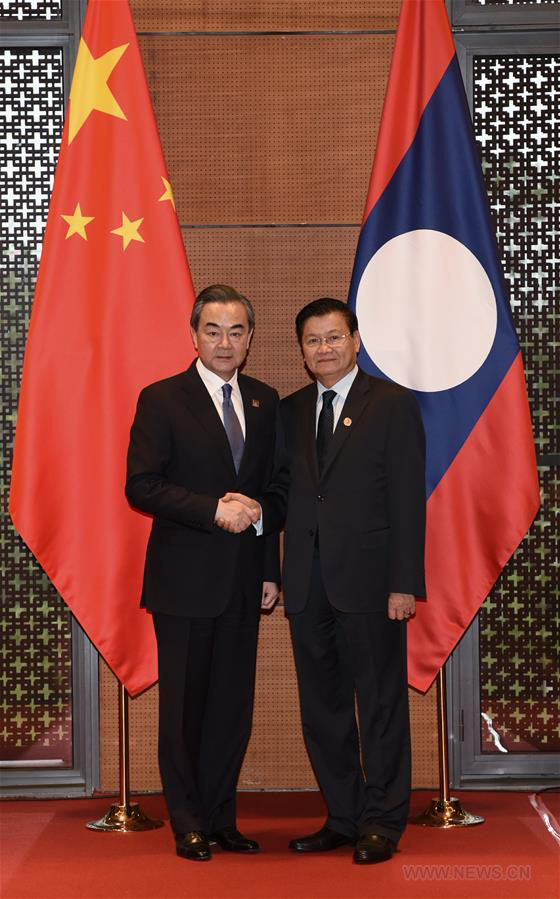 China, Laos to cooperate for more achievements in Lancang-Mekong Cooperation
(1 April 2018) During a meeting that was held on 31 March between Chinese State Councilor and Foreign Minister Wang Yi, as well as Lao Prime Minister Thongloun Sisoulith, China and Laos pledged to strive for bigger achievements in the Lancang-Mekong Cooperation (LMC). China-Laos railway is a flagship project of the bilateral cooperation between both countries and also a concrete outcome of the development strategies between China and its neighboring countries under the framework of China’s Belt and Road Initiative. China, as a member of the Greater Mekong Subregion (GMS) Economic Cooperation, has participated not only in the GMS economic cooperation program over the past 25 years, but also in sustainable management and development of the Mekong River. In 2017, China’s total investment in Cambodia, Laos, Myanmar, Thailand, and Vietnam has exceeded US$42 billion, with a growth rate of more than 20 percent.
Read more>>

China real estate investment in Malaysia to double by 2025
(29 March 2018) In a report titled “Belt and Road drive Chinese real estate investment in Malaysia” by Chinese global property portal Juwai.Com, it is reported that China’s investment in Malaysia’s residential real estate could double by 2025, driven by the investment market and education. Currently, Chinese buyers have accumulated a total of US$13 trillion (RM39.26 trillion) of assets, an increase of about 16 percent per annum, from US$5.3 trillion in 2011. Malaysia has attracted more Chinese investors in comparison with other Southeast Asia countries, with nearly three quarters of the 71.6 percent of Chinese overseas investment spent on residential property. According to Juwai.com, favorable macro market and positive regulatory conditions will drive Malaysia’s local property sector.
Read more>>

China’s CRRC to supply resources for the first phase of Thailand-Chinese rail project
(31 March 2018) According to the Thailand Transport Ministry, China’s state-owned company CRRC Corporation Ltd (CRRC Corp) will supply tracks, electronics, machinery, and locomotives for the first phase of a Thailand-Chinese rail project. The company has been asked to also provide personnel training under contract named “2.3″ which forms part of the initial phase of US$5.73 billion (THB179 billion) of the railway project to build a high-speed railway connecting Bangkok with Nakhon Ratchasima province, which is worth an estimated total of US$1.73 billion (THB 54 billion). Ministry of Transport Thailand said the contract was given to CRRC Corp without bidding because it is a government-to-government (G2G) deal. However, the costs of supplies for the contract are subject to further negotiations between both sides between China and Thailand.

Exchange and cooperation among young people to provide new economic bridges between China and Indonesia
(1 April 2018) According to Global Times, due to Asia’s complex historical disputes that have affected China’s relations with some of the Southeast Asian countries, exchanges and cooperation among youths are the best alternatives to resolve ongoing regional conflicts between the two parties. Citing Chinese Government data, the South China Morning Post (SCMP) said there are 14,000 Indonesians studying in China. These Indonesian students have witnessed new concepts such as the internet economy and modern logistics services that have become major sources of jobs for young people in China. With Indonesia’s large population of about 260 million people, E-commerce will be able to alleviate employment pressure for college graduates in Indonesia who can implement the same business concept in their country. The digital economy, which includes e-commerce, the digital sharing economy, and various services, promotes educational youth exchange program that will determine the future of China-Indonesia relations. Further, China’s Belt and Road initiative has received increasing amount of attention among young people, which can provide a starting point for their careers in the digital economy.
Read more>>

China and Vietnam agree to settle issues on maritime disputes
(2 April 2018) Chinese Foreign Minister Wang Yi and Deputy Prime Minister of Vietnam Pham Binh Minh have agreed to settle the maritime issues in the South China Sea through talks. Both countries have agreed to jointly exploit its waters, as it is crucial for the sustainable development of bilateral relations between both countries. Pham Binh Minh said Vietnam and China both share the responsibility of maintaining peace and stability in the region, reiterating Vietnam’s stance that the maritime disputes must be resolved in a peaceful manner and according to international law. Both ministers added that China-Vietnam bilateral relations have seen pragmatic results, as the two neighbours further opened up their trade and investment markets to each other. Last year, bilateral trade between China and Vietnam exceeded US$100 billion.
Read more>>