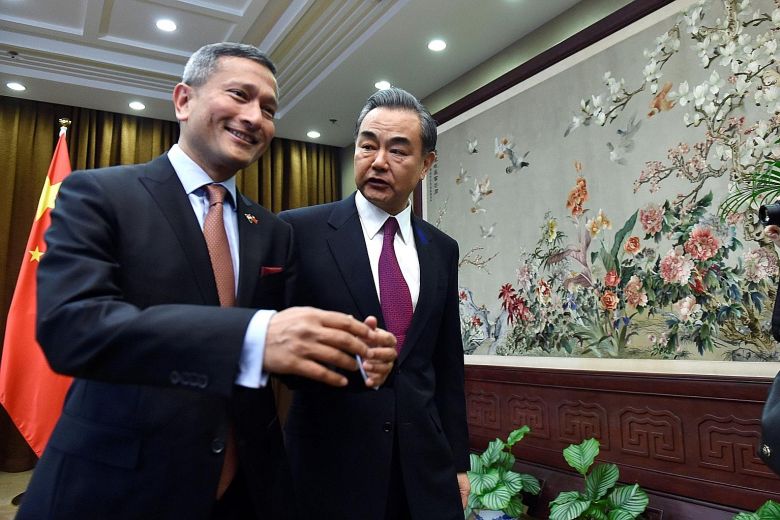 China and Singapore signs MoU for greater collaboration
(9 April 2018) According to Singapore Foreign Minister Vivian Balakrishnan during the signing of a Memorandum of Understanding (MOU) between Singapore and China, the relationship and ties between the two countries are built on a strong foundation. The MoU was signed with aims to promote greater collaboration between Singapore and Chinese companies in third-party markets along the Belt and Road. Under the MOU, the Ministry of Trade and Industry (MTI), NDRC (China’s lead agency for BRI) and Enterprise Singapore will form a working group to identify sectors and markets of mutual interest and organise business matching activities and forums to facilitate third-party market cooperation between Singapore and Chinese companies.
Read more>>

China and Myanmar sign agreement on strategic cooperation framework
(7 April 2018) Strategic Cooperation Framework Agreement has been signed between the Investment and Trade Promotion Committee of the Republic of the Union of Myanmar Federation of Chambers of Commerce and Industry (UMFCCI) and CCPIT Yunnan Sub-Council, which aims to create links between local and foreign businesses. In addition, UMFCCI is also making effort to speed up trade between Myanmar and China’s Yunnan Province, have cooperation in hosting trade fairs and promote legal services and investment. According to UMFCCI, Myanmar-China Business Council will be established this April in order to allow business in Myanmar to participate in the China-Myanmar Economic Corridor of One Belt One Road (OBOR).
Read more>>

China aims to fund airport project in the Philippines
(4 April 2018)The Philippines National Economic and Development Authority said China is interested to finance an airport project in the Philippines. According to President Rodrigo Duterte, China plays a significant role in the government’s “Build, Build, Build” program. The program, which is among Duterte administration’s landmark schemes, aims to boost the country’s economy and investments through big-ticket infrastructure project. Following the approval for San Miguel Corp.’s proposal to build a US$13.47 billion (P700 billion) airport in Bulacan by the National Economic and Development Authority’s Investment Coordination Council (NEDA-ICC), the project will next be expected to receive approval from the Philippines president. In addition, Philippines’ Department of Finance in March commented that the Philippine and the Chinese governments are set to sign the loan agreements for three big-ticket infrastructure projects to be financed by China under its “first basket” of projects.
Read more>>

Malaysia’s economy to be uplifted by The East Coast Rail Link (ECRL)
(6 April 2018) The East Coast Rail Link (ECRL) will be among key factors that will help propel the economic growth of Malaysia. According to Malaysia-China Silk Road Business Chamber, the ECRL will provide Malaysia with a competitive edge, as well as attract foreign investments, especially from China. Former Transport Minister Tan Sri Ong Tee Keat said, with Malaysia’s participant in China’s Belt and Road Initiative (BRI), the ECRL would provide a bigger opportunity for the economic growth of the country, especially for the east coast states of Peninsular Malaysia in addition to boosting the tourism sector of the country. The revenue from the ECRL operations is projected to be obtained through a transportation ratio of 30 percent passengers and 70 percent freight. According to statistics from the Malaysia Ministry of International Trade and Investment, China remains as Malaysia’s largest trading partner for the ninth consecutive year since 2009. The ECRL that would connect Port Klang in Selangor to Pengkalan Kubor in Kelantan is scheduled for completion in 2024.
Read more>>

China and Cambodia discuss ways to increase trade
(11 April 2018) Cambodia’s Ministry of Agriculture and Chinese company Hun Ty recently met to discuss ways to increase exports of Cambodian products to the Chinese market. According to the ministry, the meeting aims to study the mechanism of exporting Cambodian agriculture products to China in a fast and efficient approach in order to meet the demand of the Chinese market, while focusing on quality, safety and value generation. Tain Jin Free Trade Zone’s director, Wong Yung said Cambodia has a huge potential in agriculture and therefore, the country has to take advantage of the US-China trade war to strengthen its trade ties with other potential East Asian countries. Further to this, Mr. Wong said the ministry is eyeing to invest in a processing plant for agriculture products in Preah Sihanouk, which will allow Cambodia to meet the Chinese market demand primarily for fish, rice, and mango products.
Read more>>