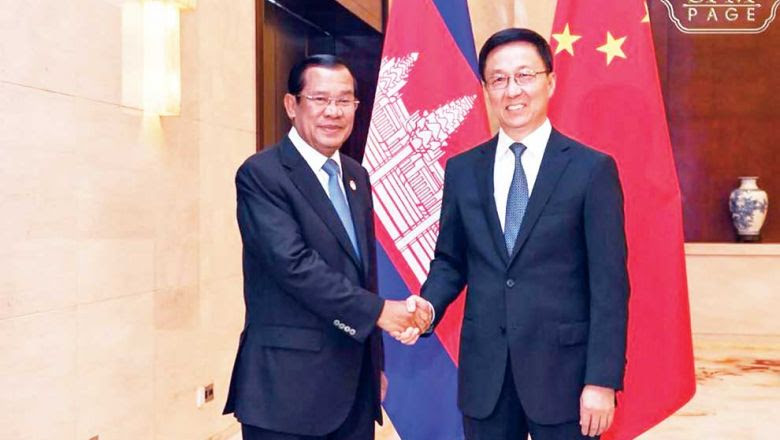 Hun Sen commits to safeguarding Chinese interests in Cambodia
(9 September 2018) Cambodian Prime Minister Hun Sen assured Chinese firms in Cambodia not to worry about contract cancellation in the kingdom. He vowed that his government would protect the interest of Chinese companies. Hun Sen met executives from six Chinese conglomerates with interests in the Kingdom during a roundtable meeting in Nanning, China as co-chair of the China-ASEAN Expo. The premier also informed the executives that Cambodia has lots of untapped potentials, in which Chinese-based companies can look into and invest. The Cambodian government has also made proposals for additional concessional loans from China to boost the country’s infrastructure, which would connect Cambodia to other ASEAN nations and China.
Read more>>

China seals MoUs with Myanmar for China-Myanmar Economic Corridor (CMEC)
(10 September 2018) China sealed memorandums of understanding (MoU) with Myanmar on the establishment of the China-Myanmar Economic Corridor (CMEC). The signing of the MoUs signifies Myanmar’s readiness to be part of China’s Belt and Road Initiative. The corridor is a 1,700km long corridor that links Kunming, China with Myanmar’s three economic centres, which are Mandalay, Yangon New City and Kyaukpyu Special Economic Zone. According to the Global Times, CMEC is the biggest foreign investment in Myanmar in years.
Read more>>

Trade conflict between China and the U.S. is an opportunity for ASEAN to forge closer ties with China, says Singapore’s Deputy Prime Minister
(9 September 2018) ASEAN is looking to solidify trade relationship with China due to the escalating trade war between China and the United States. Singapore’s Deputy Prime Minister Teo Chee Hean proposed three areas for the bloc and China to enhance relations, namely improving commitment to an interconnected world, continue the commitment to free and open trade and hold firmly to rules-based international order. Some of the measures taken to fulfil those commitments are the establishment of the China-Singapore (Chongqing) Connectivity Southern Transport Corridor, improving the ASEAN-China Free Trade Area Agreement and adopting the ASEAN-China Strategic Partnership 2030 statement, which charts out a new guide for cooperation. China has been ASEAN’s top trading partner in the last eight years while ASEAN has been China’s number three trading partner for the past seven years.
Read more>>

Chinese investors show interest in setting up operations in Malaysia-China Kuantan Industrial Park
(11 September 2018) Two Chinese firms are keen to invest in Malaysia by setting up operations worth billions of ringgit in the Malaysia-China Kuantan Industrial Park (MCKIP). Malaysia’s Deputy International Trade and Industry Minister Ong Kian Ming who met the two Chinese conglomerates said the companies were in the final stage of getting approval from Malaysia. The firms plan to make Malaysia a platform to export products into the United States and other ASEAN nations. The deputy minister, who is in Nanning, China for the 15th China ASEAN Expo (CAEXPO) 2018 said China also welcomes Malaysian companies to invest in China and ties between both nations is on the right track after Prime Minister Tun Dr Mahathir Mohamad’s visit to China recently.
Read more>>

Cambodia an attractive location for fashion companies
(12 September 2018) Fashion companies are looking to move production to Cambodia due to the trade conflict between the United States and China. Some firms have revealed plans to shift production away from China to avoid tariffs and increasing labours costs. China Market Research Group managing director said it was first thought that the trade war would be short but it could last much longer and Cambodia will see more factories shifting from China. The U.S. imposed 25 per cent tariffs on US$50 billion worth of Chinese goods and its President Donald Trump recently threatened to increase tariffs on US$200 billion worth of Chinese products from 10 to 25 per cent. Goods affected include handbags, travel items and other accessories.
Read more>>