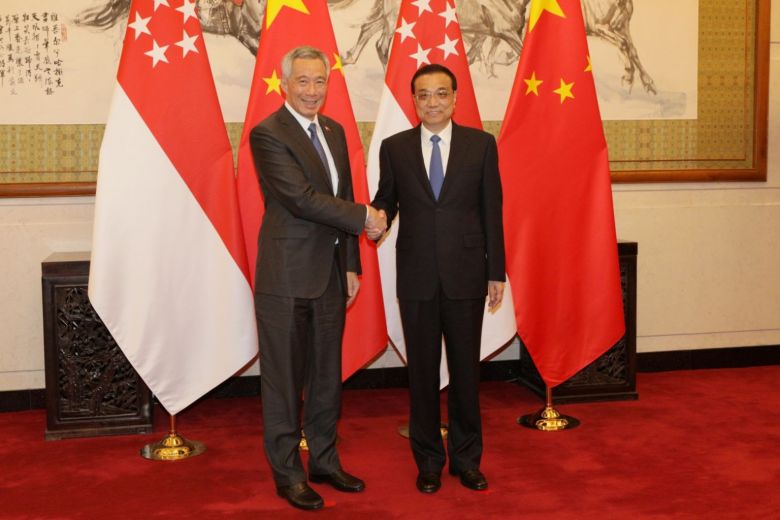 Leaders of Singapore and China exchanged diplomatic letters to mark 15th anniversary of partnership
(9 October 2018) Singapore Prime Minister Lee Hsien Loong and Chinese Premier Li Keqiang exchanged letters to mark the 15th anniversary of the Asean-China Strategic Partnership for Peace and Prosperity, which includes political-security, economic and socio-cultural pillars. China has been ASEAN’s top trading partner for eight consecutive years and is also ASEAN’s third-largest source of foreign direct investment. Lee noted that the ASEAN-China Free Trade Agreement (ACFTA) which was signed in 2010 and upgraded in 2015, has played a key role in ASEAN’s economic integration agenda. He also cited the shared commitment by ASEAN and China to substantially conclude negotiations on the Regional Comprehensive Economic Partnership by the end of this year. In addition, both sides are exploring ways to enhance connectivity through synergies between the Master Plan on Asean Connectivity 2025 and China’s Belt and Road Initiative as well as working towards full liberalisation in the Asean-China Air Transport Agreement. Furthermore, he mentioned that the adoption of the Asean-China Strategic Partnership Vision 2030 statement at the 21st Asean-China Summit in November 2018 in Singapore, will chart the strategic direction of ASEAN-China cooperation going forward.
Read more>>

Cross-border e-commerce surged between ASEAN and China
(3 October 2018) Cross-border e-commerce trade between China and ASEAN will see year-on-year growth of 50% in 2018, according to Zhao Ping, Director of the International Trade Research Department of the Academy of China Council for the Promotion of International Trade. Future prospects for cross-border e-commerce between China and ASEAN look promising as many firms benefit from lower or zero tariffs under free trade agreements. According to a recent survey, Chinese consumers look for fruits, seafood and other products from five sectors from the ASEAN region. Both China and ASEAN are establishing industrial parks and improving logistics networks to enhance better business environment for smoother cross-border e-commerce. The logistics network provided by the China-Singapore (Chongqing) Connectivity Initiative-also called the Southern Transport Corridor- is now a vital pathway for China-ASEAN trade.
Read more>>

China and ASEAN manufacturers could be affected by USMCA
(3 October 2018) Asian manufacturers could find it harder to sell their products in American markets and risk long-term isolation in key industries under the United States-Mexico-Canada Agreement (USMCA). In particular, tighter rules of origin and labour standards for car and garment industries would mean that the production of these goods could shift back to North America. For instance, stringent rules for garment manufacturing stipulating that raw materials must be sourced from suppliers from one of the three signatory countries, are likely to negatively impact Vietnamese manufacturers of sewing thread. Furthermore, the agreement states that 40% to 45% of car parts purchased by signatory nations must have been produced by workers making at least US$16 an hour. This provision is likely to see the car manufacturing base moving back to the US and Canada from Asia and Mexico.
Read more>>

Local businesses encouraged to invest in China-Myanmar economic zones
(3 October 2018) Myanmar’s Union Minister for Commerce Dr Than Myint has called for local entrepreneurs to invest in economic zones in the China-Myanmar border. During Myanmar State Counsellor Aung San Suu Kyi’s tour to China last year, a contract was signed to establish trading and processing zones in Kachin, Shan and Yunnan Province which are situated on the China-Myanmar border. A central working committee will soon be carrying out the implementation of the Myitkyina Economic Development Zone and the Kanpiketi Border Development Zone.
Read more>>

China-Vietnam meter-gauge railway records increase in goods
(9 October 2018) According to China Railway Kunming Group Co Ltd, more than 400,000 tonnes of freight have travelled across the border on the meter-gauge railway connecting China and Vietnam in 2018. Out of the 400,000 tonnes, 250,000 tonnes were exported from China, a year-on-year increase of 13.26%. The China-Vietnam meter-gauge railway, which was established in 1910, is an important China-ASEAN transportation route. After a series of negotiations, a regular freight train was launched in December 2017 between southwest China’s Kaiyuan County and Vietnam’s coastal city of Haiphong, to meet increasing freight demand. Goods, such as chemical fertiliser, coke, fodder and seamless steel tube, have been transported on the 615km long railway route.
Read more>>