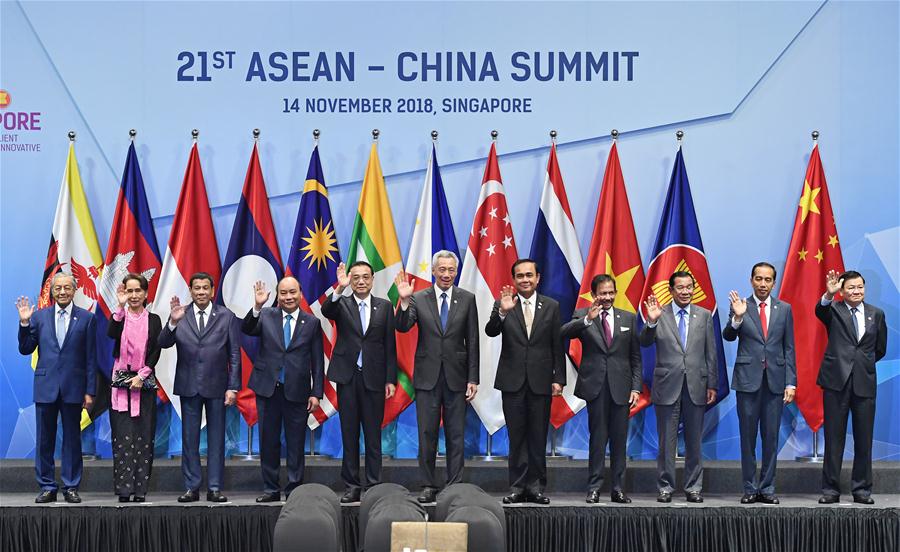 Strategic partnership vision 2030 hailed as milestone in China-ASEAN relations
(15 November 2018) China and ASEAN Member States adopted the China-ASEAN Partnership Vision 2030 on November 14 at the 21st ASEAN-China Summit held on the sidelines of the 33rd ASEAN Summit in Singapore. The agreement charts a medium and long-term plan for continued mutually-beneficial cooperation between ASEAN and China in three key areas i.e. political and security cooperation, economic cooperation and socio-cultural cooperation. ASEAN and China will also intensify their efforts to meet the target of US$1 trillion in trade volume and US$150 billion in investments by 2020, consistent with the ASEAN-China Free Trade Area (ACFTA) and the ACFTA upgrading protocol. ASEAN Secretary-General Lim Jock Hoi said that the vision will pave the way for a solid partnership between the two sides in the coming decades.
Read more>>

President Xi Jinping’s state visit to the Philippines
(19 November 2018) Chinese President Xi Jinping’s two-day state visit to the Philippines—the first visit by a China head of state in 13 years—began on November 20. The trip comes as President Rodrigo Duterte looks to Beijing for investments in the Philippines, with a focus on trade, infrastructure, tourism and telecommunications. China was both the Philippines’ top export destination and source of imports as of August this year. 972,550 Chinese tourists arrived in the Philippines in the first nine months of 2018, a 34.9% increase compared to the same period in 2017. Priorities during President Xi’s visit include the joint oil and gas exploration in the South China Sea, China Telecom’s bid for a telecommunications license, Bank of China’s partnership with 13 Filipino banks to encourage yuan transactions and other major infrastructure developments.
Read more>>

China and Brunei strengthen cooperative relations
(20 November 2018) Chinese President Xi Jinping met with Brunei’s Sultan Haji Hassanal Bolkiah in Bandar Seri Begawan on November 19 where they reaffirmed their commitment to enhance China-Brunei ties. In their joint statement, both parties committed to enhance cooperation in areas such as trade, investment, defense, security and law enforcement. The leaders also agreed to further synergize their national development strategies and maintain frequent high-level exchanges. Further, they expressed their satisfaction with their ongoing cooperation in the energy sector and agreed to continue their support for enterprises in the maritime oil and gas resources, in accordance with the principles of international law and the principle of mutual respect, equality and mutual benefit.
Read more>>

Singapore and Jiangsu to drive more opportunities with the signing of 13 MOUs
(20 November 2018) 13 MOUs were signed during the 12th Singapore-Jiangsu Cooperation Council meeting in Singapore on November 20 to enhance economic partnership and advance China’s Belt and Road Initiative (BRI). The initiatives included the development of new industrial parks by Sembcorp Development and China-Singapore Suzhou Industrial Park Development, a new petrochemical plant to promote international trade in chemicals and an innovation centre for smart drone surveying technology for environment protection. In addition, the MOUs also covered a partnership to develop third-party market collaboration along the Belt and Road Initiative (BRI) as well as agreements to promote collaborations in fintech and facilitate investments into Singapore and Jiangsu. Singapore was Jiangsu’s third-largest investor in 2017 with bilateral trade that grew at 15.7% year-on-year, reaching US$11.3 billion.
Read more>>

Cambodia looks to BRI for e-commerce and e-trade
(16 November 2018) The Cambodian Minister of Public Works and Transport Sun Chanthol said the Cambodian government is committed to fostering an investor-friendly ecosystem to promote e-commerce and cross-border trade, evident through the recent creation of a National Logistics Council where it will study the country’s logistics sector and address the issue of high costs to promote the efficient flow of exports. He was quoted at the #ConnectCambodia forum organised by the United Nations Development Program (UNDP) that aims to explore opportunities arising from the China-proposed Belt and Road Initiative (BRI) by showcasing how regional integration, technologies and innovations have created new development opportunities to advance cross-border trade in Cambodia.
Read more>>