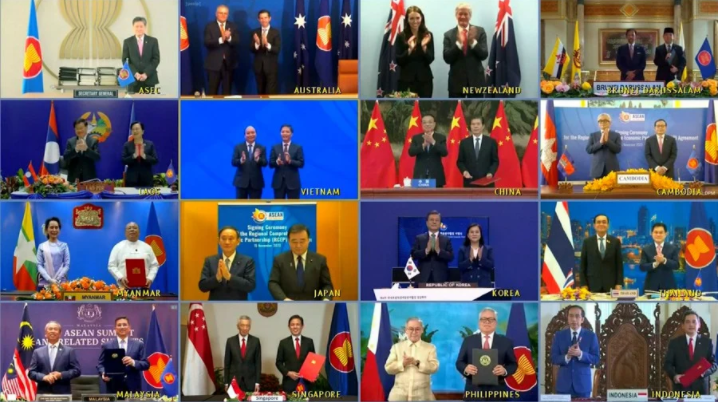 ASEAN signs RCEP with China and other regional partners
(15 November 2020) All ten ASEAN countries were among the signatories of the Regional Comprehensive Economic Partnership (RCEP), signed on 15 November 2020, and billed as the world’s largest regional free-trade agreement. The agreement was signed on the final day of the 37th ASEAN Summit hosted virtually by Vietnam. The other signatories of the agreement include China, Australia, New Zealand, Japan, and South Korea. For the agreement to come into force, a minimum of six ASEAN countries in addition to three non-ASEAN partners must ratify the agreement. The signing of the agreement comes as China-ASEAN trade reached US$481.8 billion in the first three quarters of 2020, a 5% increase year-on-year. The agreement is expected to allow China to expand its economic reach.
Read more>>

10 million Chinese tourists could visit Thailand in 2021 if quarantine time cut to ten days
(16 November 2020) Ten million Chinese tourists could visit Thailand in 2021 if authorities decide to cut the mandatory COVID-19 quarantine time from two weeks to ten days. This comes as the Center for COVID-19 Situation Administration will consider a proposal next week to cut four days from the two-week quarantine period for travellers from low-risk countries. Thailand’s Public Health Minister Anutin Charnvirakul stated that the risk of Thailand experiencing a second wave of COVID-19 would be very low due to authorities being more experienced and more capable of handling any new outbreak. He stated that Thailand is currently more than capable of handling two new cases a week but if more cases should emerge, the shorter quarantine would be reevaluated.
Read more>>

Malaysia and China to finalise first draft of the second cycle of 5-year economic programme
(12 November 2020) Malaysia and China are currently finalising the first draft of the second cycle of the Five-Year Programme for Economic and Trade Relations, said Malaysia’s Deputy International Trade and Industry (MITI) Minister Lim Ban Hong. Both parties are currently discussing strengthening trade, investment, and economic cooperation amidst the COVID-19 pandemic. China has been Malaysia’s largest trading partner since 2009; total trade between both countries in 2019 measured at US$123.96 billion. For the period January-October 2020, total trade with China increased by 3.5% year-on-year to reach US$103.93 billion. From January-September 2020, 58 manufacturing projects with participation from China were approved with investments totalling US$4.4 billion.
Read more>>

Lao National Assembly members visit China-Laos railway construction site
(16 November 2020) An observation group of 55 Lao National Assembly (NA) members visited the China-Laos railway rail-welding yard in Vientiane. The NA members went to the site to observe and exchange views on the construction of the railway. The China-Laos Railway is described as a strategic docking project which will connect the Boten border gate in northern Laos (bordering China) to Vientiane with an operating speed of 160 km per hour. The project started in December 2016 and is scheduled to be completed by December 2021. The Chairman of the NA Law Committee, Saithong Keoduangdy, described the railway as a “long-awaited road of dream for the people of Laos, and it is also a strategic cooperation project between the two countries.”
Read more>>

Malaysia calls for ASEAN and China to leverage on digital economy for post-COVID-19 recovery
(12 November 2020) Malaysia’s Prime Minister Muhyiddin Yassin called for ASEAN and China to leverage upon the potential of the digital economy as part of efforts to build a stronger economic region post-COVID-19. Muhyiddin made the remark during the 23rd ASEAN-China Summit, which was held as part of the 37th ASEAN Summit hosted virtually by Vietnam. The Prime Minister noted that the increased usage of online transactions during the pandemic proved that the digital economy could play a vital role in reviving regional economies; it will contribute to the creation of new job opportunities and encourage growth and business sustainability, especially for small and medium enterprises. He said the sustainability of economic activities will be important for the region’s economic recovery with global growth expected to slow at roughly 3.5% between 2021 and 2025.
Read more>>