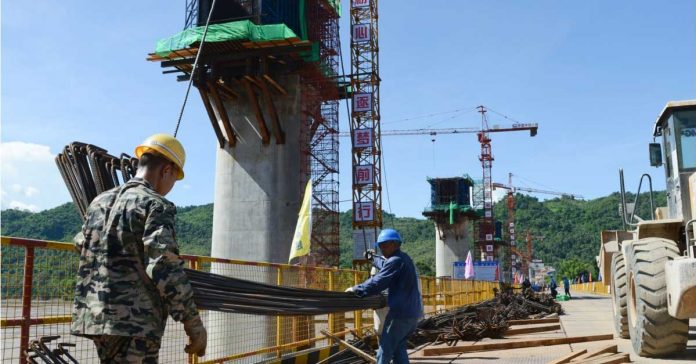 Construction of Laos-China railway resumes
(27 April 2020) The construction of the Laos-China Railway has resumed in full capacity following the return of foreign workers from China. According to a media report, Laos-China Railway Co., Ltd said on 25 April that construction works have resumed at all its work sites along the Laos-China Railway. Due to the COVID-19 pandemic, the company has put in place specific measures to reduce the risk of infection among its employees and ensure construction continues. The project has already completed installing the beams of the Luang Prabang cross-Mekong River super major bridge, putting the completion of the structure at more than 80%. The bridge has a total length of 1,458.9 meters and is composed of 28 span T-beams and six spans continuous beams. The Laos-China Railway will run some 414 kilometres, including 198km of tunnels, and will traverse 62km of bridges. It will move from the Boten border gate, connecting Northern Laos to China, down to Vientiane Capital, with an operating speed of 160km per hour.
Read more>>

Malaysia allows resumption of construction work on East Coast Rail Link
(28 April 2020) Construction work on Malaysia’s biggest mega project, the East Coast Rail Link (ECRL), has resumed, after the government gave its approval, the project’s main contractor said on 28 April. The RM44 billion project was suspended earlier when movement restrictions were put in place on 18 March to curb the spread of COVID-19. The movement control order (MCO) shut the country’s borders as well as non-essential businesses and work. According to a spokesman for China Communications Construction ECRL, the project has received approval from the Malaysian government for the resumption of work on some of the sites involving tunnels and viaducts. He added that it has put in place the necessary health and safety measures to ensure the safety of its staff and sub-contractors and that an intensified work schedule has been drawn up to catch up with the time lost due to the MCO.
Read more>>

Cambodia, China to continue to work together to fight COVID-19
(28 April 2020) Cambodia and China will continue to work together in the fight against the COVID-19 pandemic. The commitments were expressed by Cambodian Deputy Prime Minister Prak Sokhonn, Minister of Foreign Affairs and International Cooperation and Chinese State Councilor and Minister of Foreign Affairs Wang Yi. The commitment was made during a telephone conversation between them on 27 April. Prak Sokhonn spoke highly of China’s success in the containment of COVID-19 and its assistance to many countries around the world including Cambodia. He also thanked China for sending raw materials that allowed for the continued operation of factories in Cambodia. Wang Yi expressed thanks to Cambodia for opposing the politicisation and the blame game at a time when everyone should collaborate to face the joint threat to humanity.
Read more>>