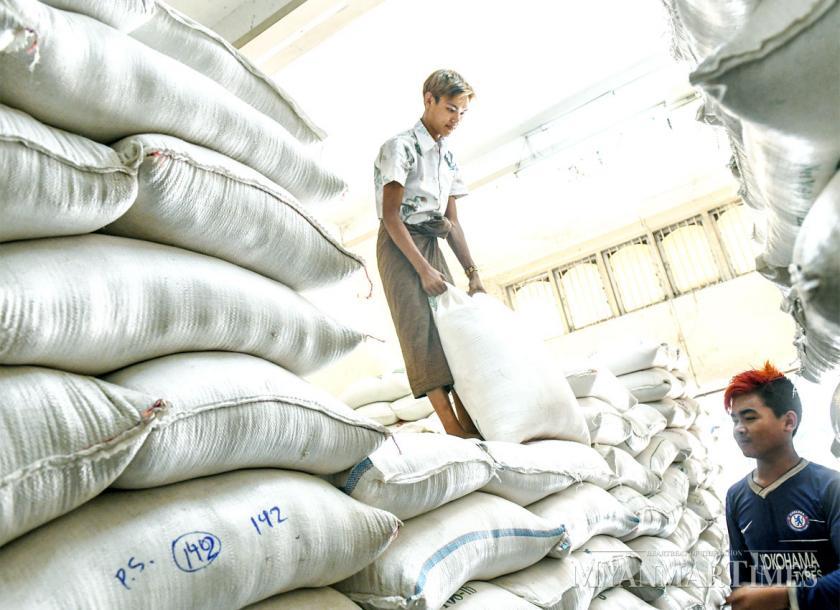 Myanmar rice traders expect losses despite higher imports allowed from China
(3 May 2020) More than 5,000 tonnes of rice, equivalent to around 100,000 sacks, have piled up at the Myanmar-China border over the past month. According to U Min Thein, vice-chair of Muse 105-mile Rice Wholesale Center, the accumulation occurred when Chinese authorities temporarily suspended imports without certificates from the General Administration of Quality Supervision, Inspection and Quarantine of the People’s Republic of China (AQSIQ). This has resulted in some 150 trucks unable to go beyond the Kyal Gaung area since 3 April and drivers have had to hire warehouses to store the rice. Min Thein said that the agriculture ministry had not been issuing AQSIQ certificates for the first few weeks of April but have started doing so after inspecting the rice stocks since 20 April. Trade at the border resumed in May and China has issued letters to Chinese companies permitting them to import up to five times more rice than the amount purchased in 2019. However, traders are still anticipating further losses due to the earlier stockpiles.
Read more>>

China’s demand for Thai durians still strong despite pandemic
(4 May 2020) Chinese demand for durian remains strong as some of Thailand’s production regions continue their harvest in May. According to a regional news outlet, Thailand’s durian sector has been able to sidestep some of the effects of the COVID-19 pandemic by dealing directly with Chinese buyers. According to Vipavadee Teplasamee, a durian grower from the Chanthaburi provinces, Chinese buyers had already visited the country’s production regions in March to secure the fruit before Thailand entered lockdown. The demand in China that resulted in these buyers’ visits has led to an increase in durian cultivation in Thailand. As a result, there has been a shift from rubber production to durian production in regions such as Chanthaburi. According to Silapakorn University research, rubber cultivation in Chanthaburi has shrunk to 89,782ha from 177,736ha in 2012, while durian orchards in the province now cover 30,400ha. Much of this growth is expected to supply China’s demand which accounted for 70% of Thai durian exports in 2018.
Read more>>

Work completed on third-longest Lao tunnel for railway link with China
(1 May 2020) Work on Laos’ third longest-tunnel at Namor district in Oudomxay province has been completed. The tunnel is part of the Laos-China Railway Project and has a length of 9,020 metres. The work was completed 43 days ahead of schedule on 29 April despite several challenges in the construction area, which was filled by groundwater. Despite the COVID-19 outbreak, officials from the Laos-China Railway Company said the firm expanded the team in charge of construction and implemented preventive measures to curb infections. The rail network at the tunnel in Oudomxay will provide the foundation for the Laos-China railway service which is expected to be operational by 2021. Built under the Belt and Road Initiative, the Laos-China Railway Project will link Vientiane in Laos with Kunming city of China’s Yunnan province.
Read more>>

Malaysian subsidiary bags US$6.4 billion sand order from Guangzhou Kaishengda
(4 May 2020) Malaysia’s Esa Pile Sdn Bhd, a subsidiary of Ageson Bhd, has accepted a purchase order from Guangzhou Kaishengda Industrial Co Ltd (GKI) for river sand and sea sand for a period of 15 years. The contract is estimated to be worth around US$6.4 billion. According to a filing made to Bursa Malaysia on 4 May, the company is expected to supply 50 million cubic metres of river sand annually and 100 million cubic metre of sea sand annually to GKI beginning from the third quarter of 2020. The company expects the contract to further strengthen its international export market and its trading business for sustainable earnings for the long term while creating business opportunities with GKI.
Read more>>

China’s NGO sends volunteers and donates medical supplies to Cambodia
(4 May 2020) Chinese non-governmental organisation, Blue Sky Rescue Team, sent a team of 10 volunteers and donated medical supplies to Cambodia to help fight the COVID-19 pandemic. The team handed over the items, including 280,000 masks, 200 disinfection machines, and 900 protective suits, to Cambodia’s Council of Ministers’ secretary of state Kemreat Viseth, chairman of Civil Society Alliance Forum (CSAF), at a ceremony held in Phnom Penh on 4 May. The team of volunteers will participate in a Joint Action for Defeating the COVID-19 under the Blue Sky Rescue Team’s Silk Road Community Building Initiative. The volunteers have been disinfecting public spaces, schools, quarantine centres, hospitals, markets, forts, and state premises in Phnom Penh and provinces, while also sharing their experiences in curbing COVID-19 with Cambodian staff.
Read more>>