Home / News & Views / Around in ASEAN / COVID-19 Pandemic and Climate Crisis: Opportunities for ASEAN to build back safer, stronger and greener

COVID-19 Pandemic and Climate Crisis: Opportunities for ASEAN to build back safer, stronger and greener 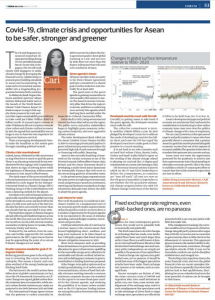 The US and Singapore have announced important climate partnerships during Vice President Kamala Harris’s visit to Singapore. The US will work closely with Singapore to tackle climate change by leveraging the financial sector; collaborating to promote green building standards in ASEAN, and incorporating climate and environmental sustainability into a longstanding program between the U.S. and Singapore1.

Back home in Malaysia, Bank Negara Malaysia (BNM) assistant governor Adnan Zaylani Mohamad Zahid was quoted as saying supply chain pressure by trade partners that require sustainability preconditions to trade would potentially put US$65.3 billion worth of annual export revenue at stake if Malaysia did not transition towards a low carbon and climate resilient economy by 2025. He argued that sustainability is no longer a nice-to-have but imperative for long-term business survival2.

Indeed, ASEAN celebrated its 54th anniversary on the 8th of August but there is much to spoil the party. There is an alarming existential threat overshadowed by the raging COVID-19 pandemic that shows no sign of slowing down while the legitimacy of Myanmar military power continues to test ASEAN’s effectiveness.

The sixth report of the most scientifically informed assessment on climate change just published in early August by the Intergovernmental Panel on Climate Change (IPCC) Working Group I of the United Nations3 casts a damning outlook for the planet.

Scientists now confirm human actions unequivocally caused the fastest global warming in the atmosphere, ocean and land within the span of two thousand years and every of the last four decades has been successively warmer than any decade that preceded it since 1850.

Climate change’s borderless impact is already affecting all inhabited regions across the world. Evidently, the month of July this year was the earth’s hottest month on record4 with extreme weather anomalies wreaking havoc in Canada, China, Germany, Turkey and Greece5.

Produced by 234 authors from 66 countries and further approved by 195 member governments, the IPCC report warns that we may be approaching the point of no return if drastic changes are not made.

Reducing greenhouse gases is the only pathway to reverse this course towards catastrophe. This means a drastic and complete overhaul of the energy landscape and ditching fossil fuels.

The bad news is the world’s actions have fallen short of global commitments. In fact, since the United Nations Framework Convention on Climate Change (UNFCCC) was signed, the global CO2 emissions have increased by 60%6, while ASEAN’s CO2 emissions per capita are projected to rise 140% between 2015 and 20407.

The International Energy Agency (IEA) warns that the pathway to carbon neutrality by 2050 is narrow8. In order to achieve the Paris agreement goals to limit global warming to 1.5oC and net-zero by 2050, there are more than 400 drastic milestones that will need to be reached in 30 years.

ASEAN member states are all parties to the Paris Climate Agreement and have committed to a shared goal of carbon reduction and neutrality by 2050 or beyond.

The good news is the green agenda is gaining momentum in various policy discussions in ASEAN. The ASEAN Economic Community pillar that drives the region’s economic ambition is embracing this agenda, which had long been nestled under the ASEAN Socio-Cultural Community Pillar, more actively.

Particularly in 2021, rising awareness and interest have been observed across ASEAN. The public sector and policy stakeholders began to highlight green measures, reducing carbon footprints, and more aggressive climate actions.

The ADB rolled out the ASEAN Catalytic Green Finance Facility (ACGF) in 2019 to encourage private participation in green infrastructure projects and reduce the perceived high risk of such ventures through co-financing with public financing.

ASEAN is also currently finalising a framework on circular economy as one of the Priority Economic Deliverables (PEDs) of Chair Brunei while the ASEAN Taxonomy Board (ATB) is developing a multi-tiered ASEAN Taxonomy for Sustainable Finance (ASEAN Taxonomy) that will serve as the overarching guide for all ASEAN Member States (AMS).

In the private sector, large corporations are the early movers in exploring ESG practices, investment, reporting and disclosure standards as foreign investment demands have driven the shift to adopt the green agenda.

COVID-19 pandemic is considered a last-chance window for a fundamental reset of our economic growth model. As governments utilise fiscal policy tools for recovery, there is a window of opportunity for the green agenda to be incorporated in the areas of stimulus spending, national budget, taxation, investment and green jobs.

CARI had submitted a list of 21 Actions for a Greener ASEAN to ASEAN Chair Brunei highlighting various short-, medium- and long-term measures to be taken based on four CARI policy papers9 that found minimal climate mitigation measures in 2020.

Some other longer term policy options such as study and phase in carbon and environmental taxes; reform of fossil fuel subsidy schemes; work towards a common minimum Corporate- Income-Tax (CIT) standard for the region to increase fiscal space needed for the climate agenda; study the possibility of an ASEAN carbon market such as the EU-Emissions Trading System (ETS) are among the policy directions that ASEAN should take.

Developed countries must walk the talk

Crucially, in getting ASEAN to take heed of the green agenda, the developed countries must walk the talk.

It’s not hard to see why countries such as fossil fuel reliant countries China, Russia, India, Turkey and Saudi Arabia failed to agree on the wording of key climate change related to phasing out coal and the 1.5-degree goal commitments at a recent G20 meet in July.

UN Secretary General António Guterres calls out the G7 and G20’s leadership to deliver the commitments as countries are “way off track”. All eyes are now on the United Nations general assembly in September if the UN is able to achieve substantial climate progress before the 26th UN Climate Change Conference of the Parties (COP26) between 31st October to 12th November.

ASEAN’s developmental gaps and political economy are sentiments that need sensitive consideration in transition to a low carbon economy. Some may even view the politics of climate change with a lens of scepticism.

We can however count on the openness of experts and policymakers in ASEAN who generally showed a consensus that a greener ASEAN is a goal that must be pursued alongside economic recovery and not at the expense of economic stability. The question is then – how to translate that openness to concrete actions.

ASEAN must not waste the opportunity presented by the pandemic to achieve just that as governments inject fiscal spending to stimulate economic growth. This is the time to mobilize a whole-of-community effort to ensure that this richly endowed region does not lose its shine.