On the cusp of change 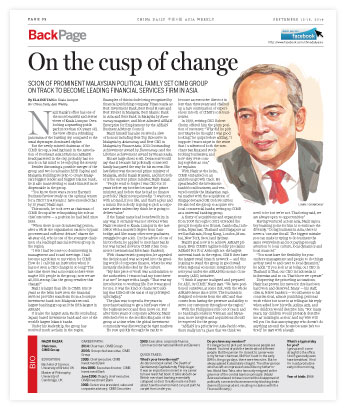 Nazir Razak’s office has one of the most beautiful and serene views of Kuala Lumpur. Overlooking a sprawling public park more than 100 years old, the view offers a refreshing panorama of the bustling city compared to the usual skyscraper-dominated skyline.

But the newly minted chairman of the CIMB Group, a leading bank in the Association of Southeast Asian Nations (ASEAN) headquartered in the city, probably has too much on his mind to be enjoying the scenery.

Besides discussing a possible merger of the group and two local banks (RHB Capital and Malaysia Building Society) to create Malaysia’s biggest lender and biggest Islamic bank, he is also maneuvering to make himself more dispensable in the group.

“You know there was a recent Harvard Business Review study on the optimal tenure for a CEO? Its 4.8 years; I have exceeded that by 10 years,” Nazir says.

This month, he took over as chairman of CIMB Group after relinquishing his role as chief executive — a position he had held since 1999.

“When there is one domineering person, after a while the organization starts to bypass processes and sufficient debate,” shares the 48-year old, who is one of the youngest chairmen of a leading financial services group in the region.

“I felt I had become too domineering in management and board meetings. I had become a problem to my vision for CIMB. How do I call this an institution when it has not seen a CEO change in so long? The last time there was a succession there were maybe 300 people in the group; now we are 40,000-strong. Can the group weather this change?”

Nazir is larger than life in CIMB. His 15 years at the helm have seen the financial services provider transform from a boutique investment bank into Malaysia’s second largest banking group and the fifth-largest in ASEAN.

It is also the largest Asia Pacific (excluding Japan) based investment bank and one of the world’s largest Islamic banks.

Under his leadership, the group has received much acclaim in the region.

Examples of this include being recognized by financial publishing company FinanceAsia as Best Investment Bank, Best Bond House and Best Broker in Malaysia; Best Islamic Bank in Asia and Best Bank in Malaysia by Euromoney magazine; and Most Admired ASEAN Enterprise for Employment by the ASEAN Business Advisory Council.

His are large shoes to fi ll. Detractors would say that is because his politically connected family has paved the way for his success. His late father was the second prime minister of Malaysia, Abdul Razak Hussein, and his brother is the current prime minister, Najib Razak.

“People tend to forget I was CEO for 10 years before my brother became the prime minister, and before that he had no finance portfolio,” Nazir notes pointedly. “I was born with a brand, if you like, and that’s a plus and a minus. But nobody is going to pick a corporate adviser unless they think he is going to deliver value.”

If the Razak name had benefitted him in any way, it certainly was not obvious when Nazir returned to Kuala Lumpur in the late 1980s with a master’s degree from Cambridge, and like many other new graduates, struggled to get a job. On the advice of one of his brothers, he applied to merchant banks
but was turned down by CIMB (then Commerce International Merchant Bankers).

With characteristic gumption, he appealed the decision and was accepted into the grueling world of corporate finance, where he was instantly shell-shocked by the culture.

“My first piece of work was a submission to the authorities. It was so bad my boss threw it at me!” he says with a laugh. “That was my introduction to working life. But it was good for me; it was the kind of character building that killed off the traits of my privileged upbringing.”

The plan was to spend a few years in merchant banking to get a bird’s-eye view of the business sector and then move on. But after three years of corporate advisory, Nazir switched over to the stockbroking arm of the group at a time when the global investment community was discovering the tiger markets.

He rose quickly through the ranks to become an executive director in less than three years and chalked up a rare combination of experiences in both of CIMB’s core businesses.

In 1999, retiring CEO Robert Cheim offered him the plum position of successor. “Why did he pick me? Maybe he thought I was good looking,” he quips before adding, “I suppose I was unique in the sense that I understood both the merchant banking and stockbroking businesses, and how they were coming
together as one,” he explains.

With Nazir at the helm, CIMB embarked on an ambitious growth track. He spearheaded the investment bank’s bond business, and ventured outside the Malaysian capital market with the acquisition of Singapore-based GK Goh Securities. He also led the group to acquire two local commercial banks, setting up CIMB as a universal banking group.

A flurry of acquisitions and expansions from 2006 through to 2012 extended the group’s footprints to Brunei, Cambodia, Indonesia, Myanmar, Thailand and Singapore as well as Bahrain, Hong Kong, London, Mumbai, New York, Seoul and Sydney.

Nazir’s goal now is to achieve ASEAN primacy. Even CIMB’s tagline boldly proclaims ‘ASEAN For You’. Although not the largest universal bank in the region, CIMB does have the largest retail branch network — and this is going to stand the group in good stead when regional economic integration rolls by next year under the ASEAN Economic Community (AEC) initiative.

“I think if anyone is aligned and prepared for AEC, its CIMB,” Nazir says. “We have positioned ourselves, at some risk, with the whole ASEAN theme since 2006. The business is designed to benefit from the AEC and that comes from having the presence and ability to serve our customers throughout the region.”

With the Philippines still out of reach and no banking licenses in Vietnam and Myanmar, more mergers and acquisitions should be expected for the group.

“ASEAN is a priority but Asia-Pacifi c-wise, there really isn’t a place that we think we need to be but we’re not. That being said, we are always open to opportunities.”

Having ventured across Asia, Nazir says a key learning point for him is to embrace the diversity. “Doing business in Asia, there is never a ‘one-size fits all’. The biggest mistake you can make is trying to do business the same everywhere and not paying enough attention to local culture, local dynamics and local nuances.”

“You must have the flexibility for your onshore management and people to do things as they need to and cater to local dynamics,” he adds. “If you look at us today, our CEO in Thailand is Thai, our CEO in Indonesia is Indonesian and so on. That’s how we operate.”

Disproving the princeling accusations, Nazir has proven his meteoric rise has been hard won and deserved. Many — his staff , clients, fellow bankers — would attest to his conscientious, almost punishing, personal work ethics but none is as telling as his reply when asked how his wife, Azlina Aziz, and two children would describe him. “For many years, my children would probably describe me as ‘missing in action’. And my wife will tell you I’m that annoying guy who doesn’t do anything around the house because he’s too tired,” he says with a laugh.