Activity in other manufacturing segments remain subdued
A reversal in precision modules & components (+7.4% yoy vs. -5.8% yoy in January) due to increased production of optical products, could not lift the precision engineering segment out of its sustained contraction (-14.9% yoy in Feb vs. -16.8% yoy in January). Meanwhile, weaker marine & offshore activities (-7.7% yoy in Feb vs. +2.6% yoy in Jan) led to slower gains in transport engineering (+4.2% yoy vs. +10.4% yoy in January). There was also a major downward revision in January’s growth reading for marine & offshore engineering due to updated information about a firm-specific factor as mentioned in Feb’s press release (revised: +2.6% yoy, initial: +26.9% yoy). Chemicals output steadied the boat, growing 2.0% in Feb (+1.7% yoy in January), while festive demand lifted output of food, beverages and tobacco (+12.2% yoy vs. +6.4% yoy in January), particularly infant milk and beverage products.

External headwinds call for cautious approach
The combined January-February IPI readings registered a mild expansion of 0.1% yoy, while slippages in the forward-looking PMI indicate that a potential recovery in Singapore’s manufacturing sector may only emerge in the second half of the year. In addition, protracted negotiations between the US and China on ending their trade stand-off, now likely to push on into Apr, are not helping to soothe frayed sentiment among exporters. Having continually tightened its exchange-rate based monetary policy throughout 2018, we expect the Monetary Authority of Singapore (MAS) to take a pause and maintain the slope, width and mid-point of the S$NEER at its bi-annual review next month, to monitor heightened risks to the external outlook. 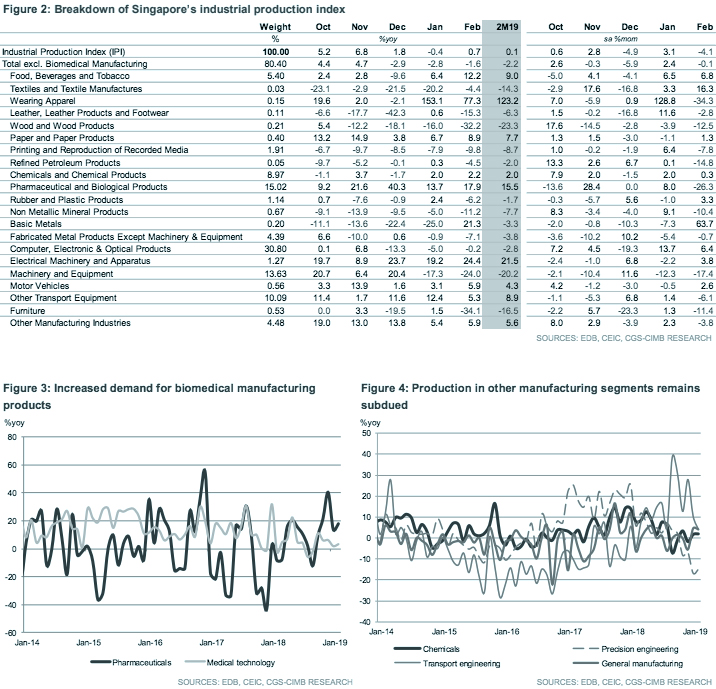 Originally published by CIMB Research and Economics on 27 March 2019.