Great Expectations and the Belt-Road Backlash 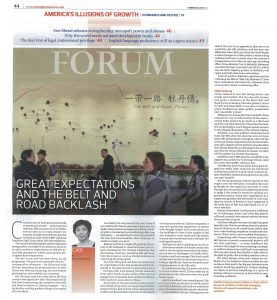 Countries do not have perpetual friends or perpetual enemies – only perpetual interests. That was as true in Lord Palmerston’s time as it is now despite the surprise, outrage even, that has greeted revelations that China’s Belt-Road Initiative was not about love thy neighbour.

The recent backlash on China’s signature foreign policy centrepiece has almost as much to do with overblown expectations as with the actual debt quandary in which many project participants found themselves.

The Belt-Road scheme is not and had never been an aid programme. The goal was to generate returns commercial or otherwise for China and, with the best intentions, for project partners as well. China was offering financing – not investment participation and certainly not a handout.

But hype took over even before the first contract was signed. Not that China had tried all that hard to discourage the narrative of the Belt-Road Initiative as Chinese largesse – as a big brother with big pockets riding to the rescue of its brethren.

Inevitably the story soured. The rosy vision of unconditional Chinese generosity gave way to a darker interpretation as suspicion and fears clouded what is increasingly seen as Beijing’s debt-trap diplomacy – encapsulated in that unforgettable New York Times headline: How China got Sri Lanka to cough up a port.

Beijing was likely caught off guard by the extent of the backlash. It must have been particularly alarming for the Chinese leadership that developing countries, including Belt-Road partners, have been just as vocal as Western nations in criticising the programme.

Not that China had not done its homework. Its negotiating teams had prepared well for demands at the government-to-government level – perhaps even anticipating private demands from some heads of government. That level of engagement would have been all that would have been needed to seal a deal in China.

But people on the ground where the projects were being set up were not happy. Resentments range from the lack of local labour participation in Belt-Road funded schemes to the award of contracts mostly to Chinese companies. There were also grassroots opposition to operations that damage fragile local ecosystems, such as the building of a dam in the jungles of Indonesia’s Sumatra or the roads and rails connecting Eurasia that would destroy the habitat of many endangered species.

Beijing had been slow in picking up on the cues.

Grievances within civil society tend to be dealt with at the local government level in China. They are not seen as harbingers of trouble that those in power could not manage. Thus local rumblings and protests would not have been seen as constituting a significant check on the policy position of governments in the Belt-Road orbit.

By underestimating the power of civil society in the outside world, China ended up unprepared and on the defensive when the pushback finally came.

And the pushback was unambiguous. The surest way to lose an election in South and Southeast Asia, it has been said and not entirely in jest, was to be extremely enthusiastic about China’s Belt-Road Initiative.

In the Maldives, the pro-Beijing party was unseated this year by an opposition which ran on an explicitly anti-BRI platform. And last year saw Malaysian voters kick out Datuk Seri Najib Razak, a staunch supporter of BRI projects, whose ruling coalition had been in power since the country’s independence more than 60 years ago. On taking office, Prime Minister Tun Dr Mahathir Mohamad cancelled the East Coast Rail Link, which was the BRI’s flagship project in Malaysia, and spoke pointedly about neo-colonialism.

From Sri Lanka to Pakistan, opposition parties criticising the Belt-Road Initiative as “debt trap diplomacy” have been rewarded at the ballot box whatever their actual policy stance on attaining office.

It realised it was fast losing hearts and minds and wallets. The six-year-old venture was given a makeover at the latest Belt-Road Forum in Beijing. The new glossary terms for Belt-Road Mark II are zero corruption, green, multilateral, high-quality, sustainable and reasonably priced.

Malaysia was among the first to benefit. China reduced the cost of construction of the controversial rail project by as much as a third and agreed to increase the level of local involvement. Not surprisingly, a much happier Kuala Lumpur is now singing praises of the Chinese scheme.

Pakistan too had publicly distanced itself from the Belt-Road Initiative after the electoral win of Imran Khan. The government was highly critical of the terms previously negotiated. Fast forward half a year and a happier prime minister now describes the Chinese Initiative as a blessing for his country and that the China Pakistan Economic Corridor will be positive for foreign investment.

Doubtless, other Belt-Road partners would like to be happier too as they try to leverage on China’s need for a near-term public relations win.

The Belt-Road Initiative has never been about doing good despite media hype. China has its reasons for wading into projects in junk-rated countries despite feasibility studies showing them to be, well, not quite feasible.

But second-guessing Chinese motives at this stage is not time well spent. It would be far more profitable for the suspicious borrower to comb through loan documents and related agreements to judge if the reward is worth the sacrifice in a particular project. Going into negotiations as a supplicant grateful that the lender is even looking your way, as is known to have happened in the early days of Belt-Road Mark I, is to invite a raw deal.

Belt-Road Mark II will present a different set of challenges. ASEAN and other Belt-Road players will need to watch their step as tensions between China and the US grow.

And it will grow because the fight has gone beyond trade. This is now about American perceptions of China as an all-round threat rather than just a rules-bending competitor in trade and commerce. This is now a race for global dominance.

Cooperating with Chinese entities under the Belt-Road banner on purely commercial projects will not raise eyebrows – or news headlines. But schemes that might be seen as having a strategic or military dimension could lead to perceptions that the Belt-Road participant has decided to take sides in the fight of giants. Not a healthy position to be in.

The silver lining is that such choices are unlikely to be too frequent. China’s pockets are not as deep as they used to be. Big new infrastructure projects involving significant Chinese funding are likely to become something of a rarity as Beijing redirects resources to deal with its own economic problems.