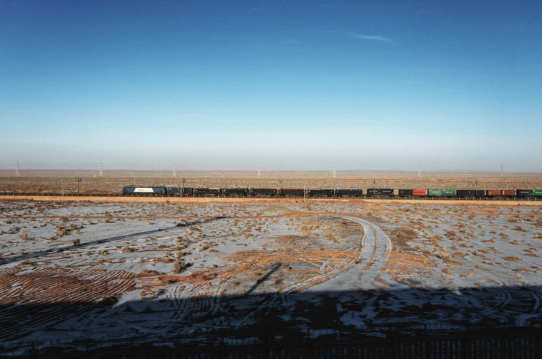 At the 2nd Belt and Road Forum (BRF) in Beijing at the end of April, attended by 150 countries, 37 of whom were represented by their leaders, China addressed many of the criticisms against its Belt and Road Initiative (BRI).

China has had to do battle on two fronts over its BRI, an ambitious global project for connectivity and infrastructure development announced in 2013. The first criticism is that the BRI is China’s masterplan to dominate the world. The second, not unrelated, and more empirically demonstrable, is that project terms lead to a debt trap exposing countries to that domination by China.

China is fighting hard to push the BRI forward despite evidence of countries caught in the debt trap. In doing this it had until recently taken the usual hard line of ignoring the opposition but, running into the BRF, there were indications China was more willing to argue and make its case, as well as review terms of project implementation.

Before the BRF, China made a diplomatic effort to get the BRI accepted in Europe. There was a limited success as Italy signed on, the first among G-7 countries, but Chinese leader Xi Jinping’s visit to France in March failed to achieve EU endorsement. President Macron invited German Chancellor Merkel and European Commission President Juncker to join him in meeting President Xi to show a largely united European front, even if Italy was a significant economy that had broken ranks. Europe maintained its position the BRI had not met international norms in its execution.

But it was in Southeast Asia, China’s economic backyard, that the BRI was particularly tested. The banner RM65.5 billion East Coast Rail Link (ECRL) BRI project in Malaysia was suspended by the new government that came to power in May 2018. Against a background of extensive corruption in the previous government, Malaysia questioned the cost and financial terms of the ECRL, suggesting the state-owned China Communications Construction Co, Ltd (CCCC) was complicit in an arrangement with then Prime Minister Najib Razak’s liabilities arising from his corrupt practices.

This arrangement inflated the cost of the project, and returning Prime Minister Mahathir Mohamad was not having any of it. By the new government’s calculation, the country would have been saddled with a debt of RM130 billion under the financial terms, which included an obligation to make payments off-shore for the loan with China’s EXIM Bank according to a set timetable, rather than work progress. Actually RM3 billion had already been paid to CCCC with hardly any progress of work, giving rise to questions of what the payments were for.

The previous Malaysian government had been voted out primarily because of deep and extensive corruption best illustrated by the now well-known 1Malaysian Development Berhad (1MDB) scandal. The link of the ECRL terms’ with interest payments in that scandal was suspected. Indeed there were two gas pipeline projects involving the China Petroleum Pipeline Bureau costing RM9.4 billion that involved similar payment terms according to timeline and not work progress, which were terminated by the new Malaysian government. RM8.25 billion, or 88% of total project cost, had been paid when only 13% of the work was completed. 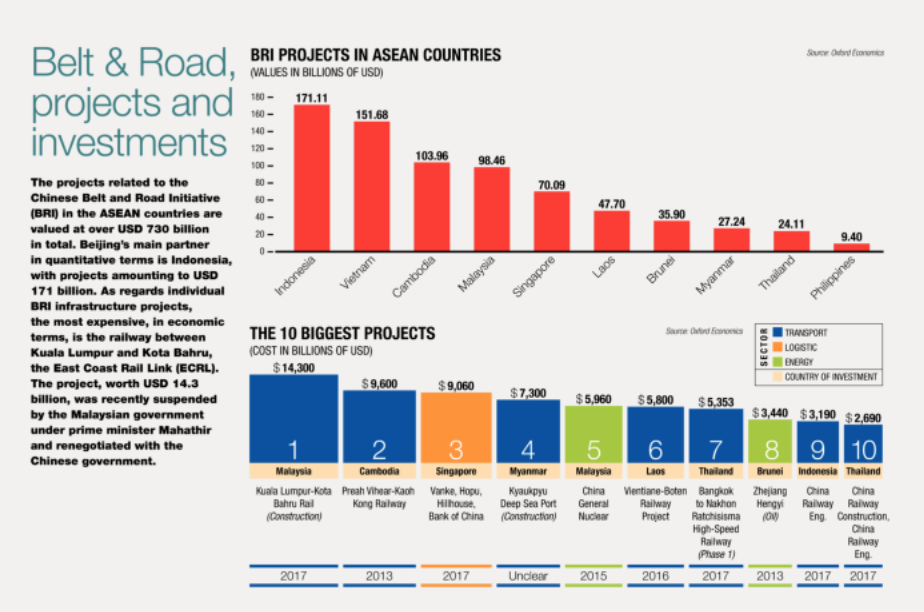 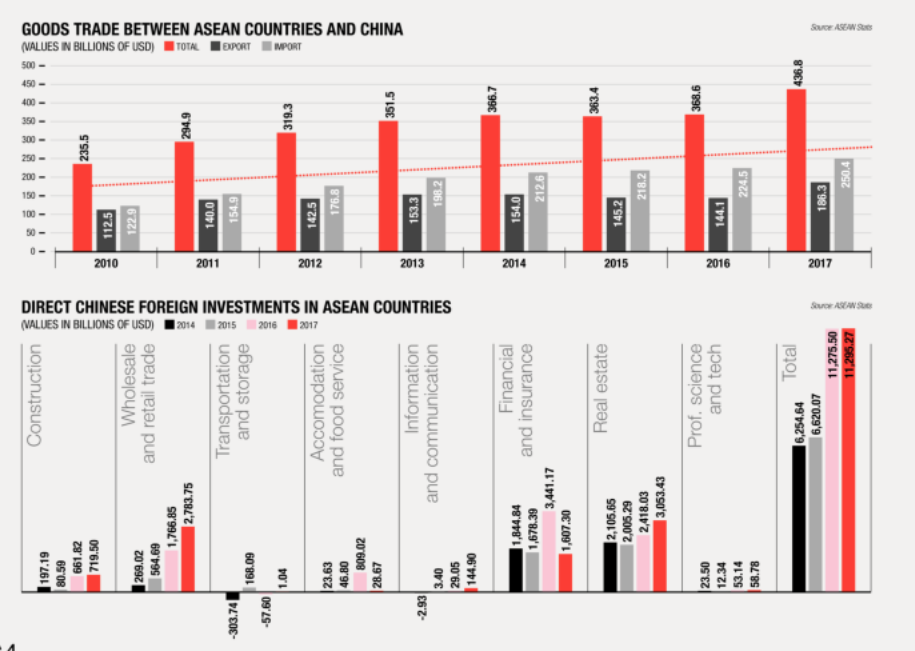 Prime Minister Mahathir and his government were embarked on a great cleanup, more important to Malaysia than whatever the BRI may be to China. The previous Prime Minister Razak had left the government with financial liabilities which, if not addressed, would lead the country to bankruptcy. It could not afford to accept the burdens of BRI projects so important to China which would lead Malaysia to financial distress. The suspension of the ECRL and termination of the two gas pipeline projects were seen to be in Malaysia’s best interest.

All the debt trap arguments against the BRI come to mind. But it must not be forgotten that corrupt national leaders make it possible for their country to be sold out to benefit themselves or to resolve the demands arising from a governing kleptocracy.

Malaysia is fortunate that the costly ECRL project had not proceeded too far down the road. In the case of Hambantota Port Development Project in Sri Lanka it was too late to avoid the ceding of a 99-year lease of the port to China following a huge debt default. With respect to the China-Pakistan Economic Corridor, contested by India for its perceived security threat, the contract is so far advanced that China refuses to renegotiate despite the request of the new government elected this year.

Nevertheless even in Malaysia it was no easy thing to renegotiate the ECRL deal, both to make it financially sustainable and to do it while saving Chinese face. Finally a supplementary agreement was reached, after months of negotiation. The total cost per kilometer of the rail line linking the east coast of peninsular Malaysia with the west was reduced by over 30% with a slightly shortened track (648km) and new alignments which saved a 16 km Quartz Ridge, the longest pure quartz dyke in the world as well as reduced tunneling through silica of the country’s main mountain range.

Diplomatic efforts to revise the agreement

The whole reset was a delicate matter, as overall Malaysia-China relations had to be secured and preserved. In fact China was upset when, on coming to power, the new government in Malaysia heavily criticised the one-sided and suspect BRI pipeline and ECRL agreements. It took careful diplomacy and delicate renegotiation to arrive at a supplementary ECRL deal which was described as a win-win for both parties.

Prime Minister Mahathir’s tense and difficult visit to Beijing in August last year, after he had described the BRI agreements in Malaysia as “unequal treaties”, and when he informed China’s leaders that the ECRL project was suspended and needed renegotiation, was a far cry from his celebratory attendance at the BRF in April this year. Malaysia’s interest was protected and the ECRL BRI project was saved.

Mahathir was accorded a warm welcome and honoured with being invited to make one of the few non-Chinese presentations at the forum wherein he applauded the visionary BRI for bringing development to less advanced countries if the best terms were observed. President Xi in his opening address conceded that there were issues in BRI implementation and promised care in the future to ensure financial sustainability as well as environmental protection. Of course this was not the result of the ECRL only. It was a reaction to relentless criticism of BRI project terms and insufficient respect for the environment. Nevertheless, the Malaysian ECRL case would be a useful case study for how to get out of a tight spot without upsetting the whole applecart of overall relations with China.

At the bottom of it all is the matter of host country corruption. When Chinese companies see the opportunity, they seize it. This can result in deep losses for the country where the BRI is supposed to bring benefit, exposing future generations to financial burdens in unsustainable projects. If best practices are adhered to, particularly transparency, the corrupt host country politicians and Chinese companies would not get away with it. 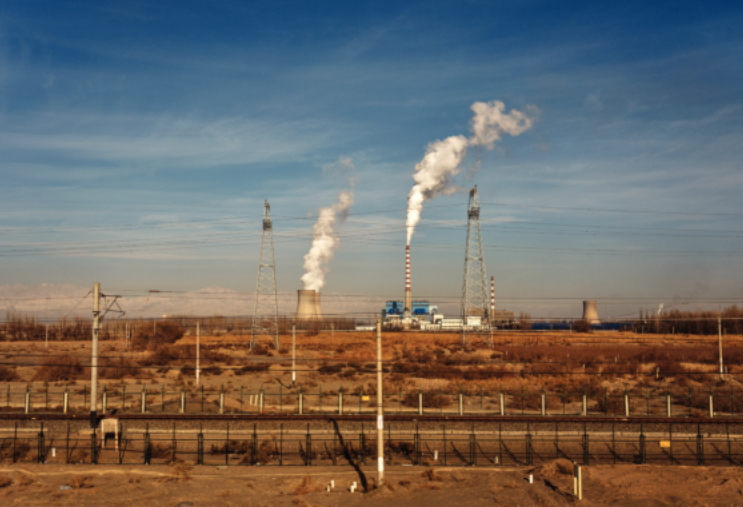 At the BRF, Xi promised all this would change. It might be useful to ensure this by having open tenders, well scrutinised review of the commercial and financial proposals, as well as environmental impact studies, before agreements are finalised. There also has to be close monitoring in the execution of projects to ensure adherence on the ground to the terms on paper.

The Master Plan on Connectivity and Vision 2030

In Southeast Asia, under the Masterplan on ASEAN Connectivity (MPAC 2025), there are five guiding principles, of which two – sustainable infrastructure and regulatory excellence – are relevant to ensuring projects embraced do not become a financial and environmental burden or disaster. The other principles are digital innovation, seamless logistics and people mobility. Meanwhile, last November in Singapore, the ASEAN-China Strategic Partnership Vision 2030 was adopted, which, among other things, enjoined both sides to “strengthen anti-corruption through relevant mechanisms.”

Vision 2030 also called for the common priorities of the BRI and MPAC 2025 to be synergised. If these declarations are to mean anything, and China’s statement at the BRF is to be taken at its word, it would surely make sense for ASEAN and China to get together to make BRI projects work for all parties, without the kinds of problems, just in the region alone, which plagued the ECRL, caused the Yangon-Mandalay railway project to lapse, the Jakarta-Bandung High Speed Rail plan to continue to be unfulfilled, and the Vientiane-Kunming Rail Link costing US$6 billion – 40% of the GDP of Laos – to be a matter of concern. 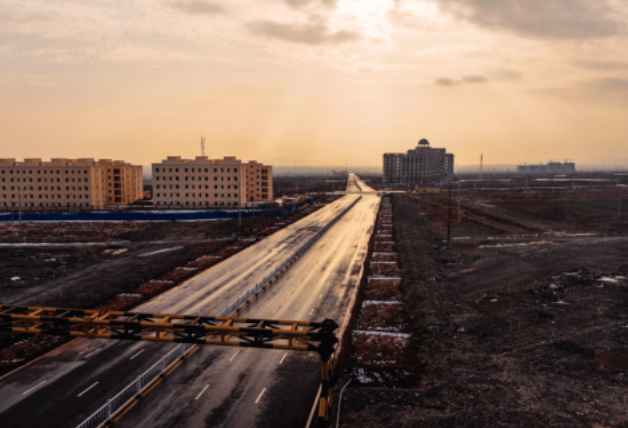 A survey last year found that of 1,814 initiatives that could be counted as BRI projects in 78 countries 270 had been cancelled, stalled or lapsed – a 15% failure rate. Worse, in terms of value it was 32% failure. This is not good for such a promising and visionary initiative. It falls on ASEAN and China to increase the success rate in Southeast Asia with their close economic relations and many commitments to deepen them, including in connectivity and infrastructure development through the BRI.

With Beijing’s greater openness to address shortcomings in BRI project execution, it is timely that ASEAN should engage China, on a matter which all agree, unlike the South China Sea disputes, to achieve a positive outcome. The region has been under-investing in infrastructure since the 1998 Asian financial crisis. According to AMRO (ASEAN Plus 3 Macroeconomic Research Office) the rate of investment has been 2.5% of GDP when it should be 6%.

The scepticism of the EU and the opposition of the US

BRI success in Southeast Asia will have a good demonstration effect to achieve acceptance elsewhere, particularly in the EU which continues to be sceptical but would wish to participate if BRI project implementation meets international norms and best practice – as China proclaims now would be the case.

There remains American objection to the BRI as this grand plan by China for global domination through debt trap diplomacy. If the debt trap is removed, one wonders how the BRI would be viewed. When China initiated the Asian Infrastructure Investment Bank (AIIB), which was established in 2016, the American objection was that it would not measure up to international standards of project finance. The bank, on the contrary, has actually been quite conservative and now has 70 members, including some of America’s closest allies.

The US is isolated on the AIIB. Would it be similarly isolated on the BRI should the initiative turn out for the better? The US must not be seen as the stick in the mud. It has not done well in responding to the rise of China. In the region, it is China that is setting the agenda, with the US standing on the sidelines, always advising countries not to go along with the rising power but with no clear counter-strategies of its own.

Southeast Asian countries are less enamoured of the geopolitical consequence of the BRI than they are of its economic benefit through infrastructure development and improved connectivity. While most would prefer an American presence in the region to balance China’s, they see the US, with its unpredictable engagement and policies, falling behind, and with no developmental initiative of any kind.

It is not that Southeast Asian countries have succumbed to China, but its extensive economic presence is a reality. China is deeply engaged with the region. Initiatives such as the BRI have great value to these countries, whatever the shortcomings exposed, which now are promised to be addressed.

They must seize the moment to make the BRI truly work for their economies by having honest leaders who will collaborate with China – or any other party for that matter – in a transparent manner which measures up to best international practice and norms.