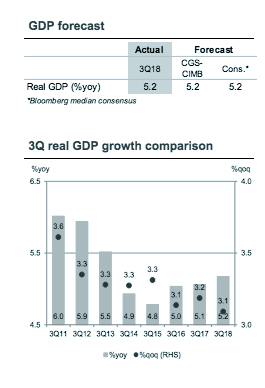 The drag from net exports extended into fourth quarter
The contribution of net exports remained a drag on GDP growth (-1.1% pt vs. -1.2% pt in 2Q18) as import growth stood resilient to meet expanding domestic demand (+5.8% yoy in 3Q18 vs. +5.4% yoy in 2Q18) while moderation in export performance due to lower O&G exports was mitigated by a bump up in exports of services as a result of increased tourist spending during the Asian Games.

Public consumption growth at 11-quarter high
Public consumption growth strengthened to 6.3% yoy (+5.2% yoy in 2Q18), the strongest expansion since 2015, on the back of higher spending on personnel, materials and subsidies. Investment momentum recovered in 3Q18 (+7.0% yoy vs. +5.9% yoy in 2Q18) as the growth in buildings & structures picked up the slack from the long festive holiday in 2Q18, which in turn also supported construction activity (+5.8% yoy vs. +5.7% yoy in 2Q18). Investment in machine & equipment remained resilient due to the delivery of rolling stocks that are expected to continue into 4Q18.

2018 GDP growth revised lower to 5.2%
We revise our 2018 GDP growth forecast lower by 0.1% pt to 5.2% (vs. +5.3% previously) as we think economic activity is unlikely to improve significantly in 4Q18 (+5.2% yoy in 9M18) on the back of 1) a weaker global growth outlook amid US-China trade tension, 2) a softer rupiah, and 3) a tighter monetary policy after Bank Indonesia’s (BI) 150bp rate hikes to maintain macroeconomic stability. We expect BI’s monetary policy to remain guided by the need to maintain attractive yield differentials and a manageable current account deficit (CAD). As such, we anticipate another 25bp hike by the central bank in December, lifting the policy rate to 6.00% by end-2018. 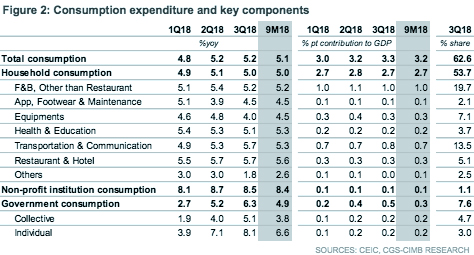 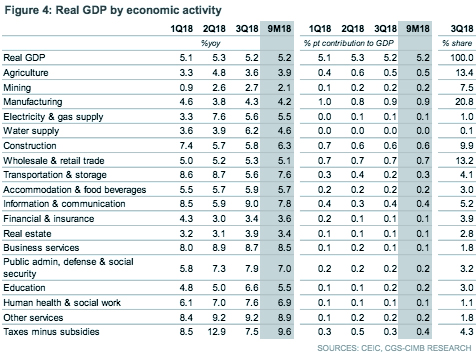 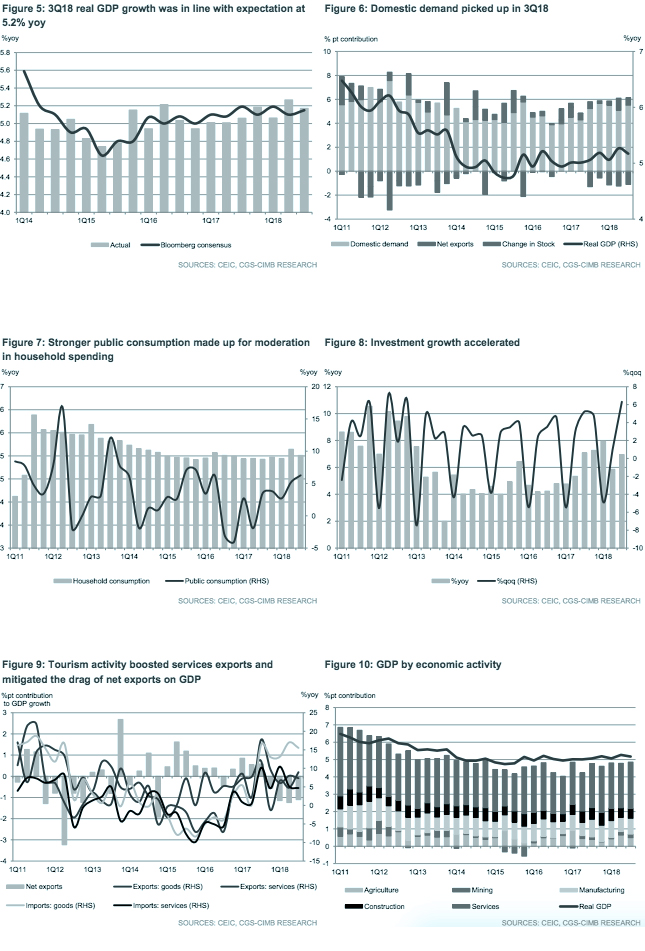 Originally published by CIMB Research and Economics on 6 November 2018.