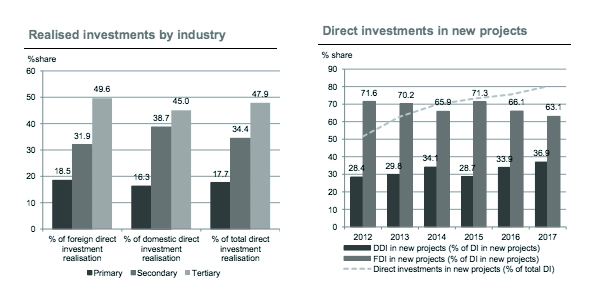 Direct investment dominated by tertiary sectors
DI in 4Q17 was driven primarily by tertiary sectors: transport, storage & communications (FDI +432% yoy / DDI +518% yoy), construction (FDI +139% yoy / DDI +119% yoy), real estate (+29.6% yoy / DDI +394% yoy) and utility (FDI +80% yoy). Most of these industries benefit from the government’s ambitious plans for infrastructure projects and power plant construction. On the back of improving commodity prices, FDI into the mining industry remained above US$1bn for the fifth consecutive quarter, whereas DDI into the mining sector fell to US$55m after three-quarters of exceptionally strong realisations ranging between US$326m and US$606m.

Improved investment climate spurs new investments
DI has been rising by the double-digits in every quarter in 2017, and the full-year DI outperformed the government’s target by 2.1%, supported by an improving global growth outlook, commodity prices as well as better investment climate, i.e. greater ease of doing business, tax incentives, FDI liberalisation and upgrade in sovereign ratings. This was also reflected in the higher number of realised projects for the year (+49% yoy to 49,617 projects) as well as the improvement in DI in new projects to 80.2% of total DI (75.5% in 2016). 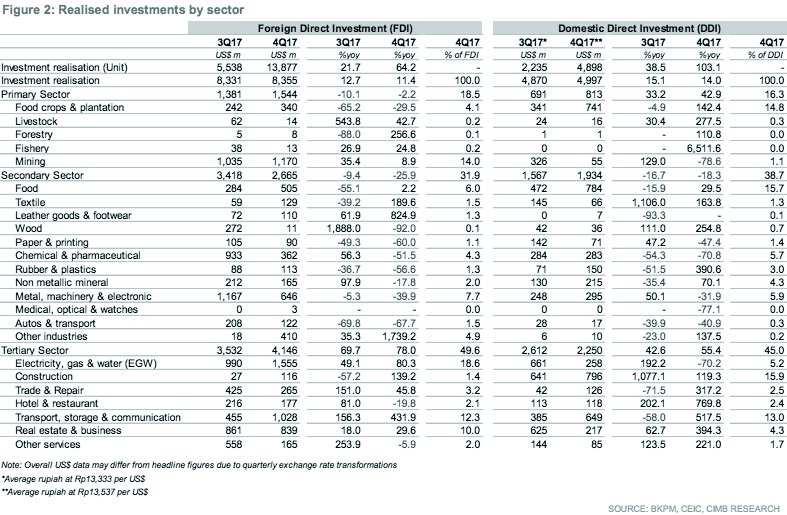