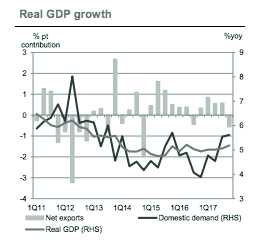 No notable improvement in private consumption
Low base effects, coupled with decent realisation of domestic government revenue collection, lifted public consumption growth higher in 4Q17 (3.8% yoy vs. 3.5% yoy in 3Q17). Nonetheless, private consumption growth remained sluggish (5.0% yoy in 4Q17 vs. 4.9% yoy in 3Q17). While the moderating inflation rate contributed towards the collective improvement in household spending on F&B, footwear and equipment, it has yet to translate into stronger discretionary spending. As such, the expansion in household consumption of transport & communications slowed amid lower auto sales, although disrupted transport services due to poor weather could also be a contributing factor, we think.

Reiterate 2018 GDP growth forecast of 5.3% yoy
With a couple of key events scheduled for 2018, namely regional elections and the Asian games, we expect domestic demand to remain the key driver of GDP growth in 2018F. A gradual recovery in private consumption could be in sight amid a stable inflation rate, higher minimum wage growth, firmer commodity prices and falling lending rates, whereas investment growth will continue to ride on the improved investment climate and infrastructure spending, in our view. We reiterate our GDP forecast of 5.3% yoy for 2018. 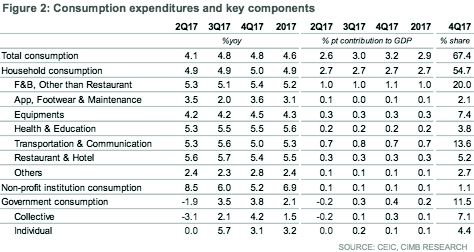 Stronger government consumption was due to the low base effect and decent realisation of tax revenue collection, which lent support to government expenditure.

Another outperforming quarter for gross fixed capital formation growth (7.3% yoy vs. 7.1% yoy in 3Q17) as investment in machine & equipment as well as buildings & structures quickened.

The stronger growth momentum in construction and services sectors offset the slowdown in manufacturing and resource-based sectors (i.e. agriculture, mining). 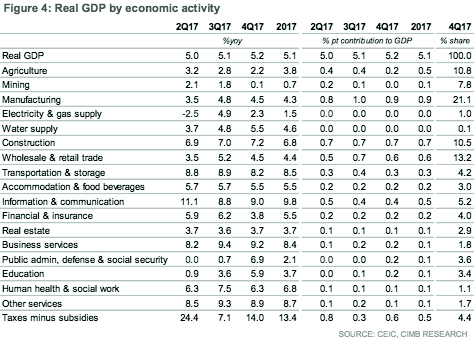