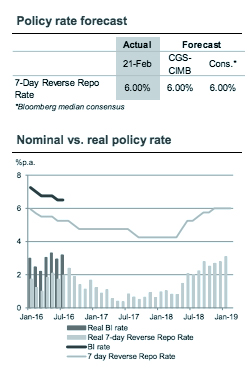 Current policy rate…
As widely expected, Bank Indonesia (BI) maintained its 7-Day Reverse Repo Rate at 6.00%. It left the Deposit Facility Rate and Lending Facility Rate unchanged at 5.25% and 6.75%, respectively. BI guided that the latest monetary policy decision is consistent with its efforts to strengthen the nation’s external stability.

… may be maintained throughout the year as the US Fed buckles
The US Fed has signaled a pause in the policy rate tightening cycle as it assesses growth and financial risks and plans to stop shrinking its balance sheet, reducing two sources of risks that contributed to the Rp/US$ weakness in the past year. Although there remains the question of how long the US Fed will hold its policy rate, recent comments by a few regional Fed Presidents indicated possibility of only one hike, or no hike at all, for 2019. Hence, we see room for BI to keep its policy rate unchanged throughout 2019 at 6.00%, a downward revision from our previous forecast of 6.50%, which suggested two rate increases.

Reducing current account deficit remains a key focus…
Lowering the nation’s current account deficit (CAD) to 2.5% of GDP remains a key priority for BI, and it will utilise accommodative macroprudential policies and liquidity-enhancing measures to boost lending activity to extend economic growth momentum. CAD worsened from 1.6% of GDP in 2017 to 3.0% of GDP in 2018 on the back of recovering domestic demand and higher oil prices. The surprise widening in trade deficit to US$1.2bn last month indicates complications in narrowing the CAD as imports are being supported by resilient domestic demand while export performance is being dampened by slowing global economic growth.

… before policy rate direction is reversed
Note that Indonesia’s financial account surplus (FAS) averaged 2.6% of GDP in 2015- 2018. Reducing CAD to 2.5% of GDP would ensure that excess consumption would be financed by net inflows in its financial account. This could provide some comfort to the central bank and government that the CAD would not exert too much pressure on Rp/US$. Until then, we think BI may be patient and leave its policy rate unchanged throughout 2019. 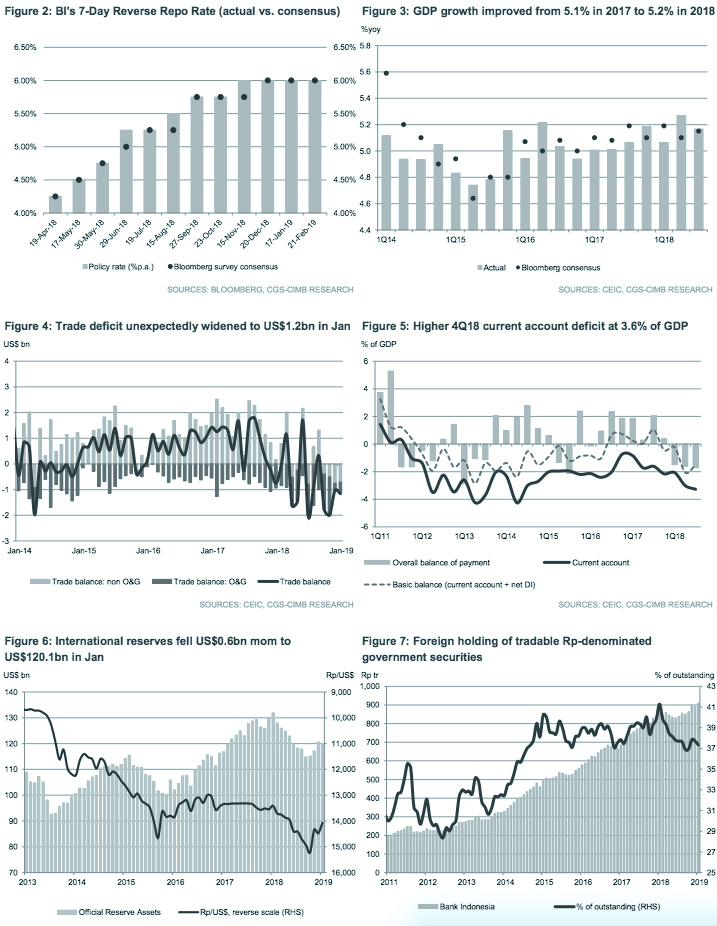 Originally published by CIMB Research and Economics on 22 February 2018.