Disappointing exports amid slowing global growth momentum
Indonesia has yet to reap the benefits of trade diversion from the US-China trade conflict. Non-O&G exports to China have been on a decline in the past five months, at an increasingly steeper pace (-18.1% yoy in 2M19), while non-O&G exports to the US remained muted (-1.6% yoy in 2M19). Slowing global growth momentum weakened nonO&G exports to other key trading partners, such as Japan (-15.9% yoy in 2M19), Singapore (-20.7% yoy), Malaysia (-7.3% yoy), Thailand (-5.2% yoy), and the EU (-9.6% yoy). Slowing external demand was reflected in the large deceleration in export volume expansion (+5.3% yoy in February vs. +14.6% yoy in Jan), while export price growth remained lacklustre (-15.8% yoy in February vs. -16.5% yoy in Jan) amid lower commodity prices.

Bank Indonesia expected to maintain policy rate
The rebound in February’s trade balance lowered cumulative trade deficit to US$734m in 2M19 (-US$809m in 2M18), easing pressure on the current account deficit (CAD) position. Nonetheless, easing global growth and its impact on commodity prices remain a key downside risk. Hence, we expect Bank Indonesia to leave its 7-Day Reverse Repo Rate (7DRRR) at 6.00% at the Board of Governors’ meeting on 21 March. 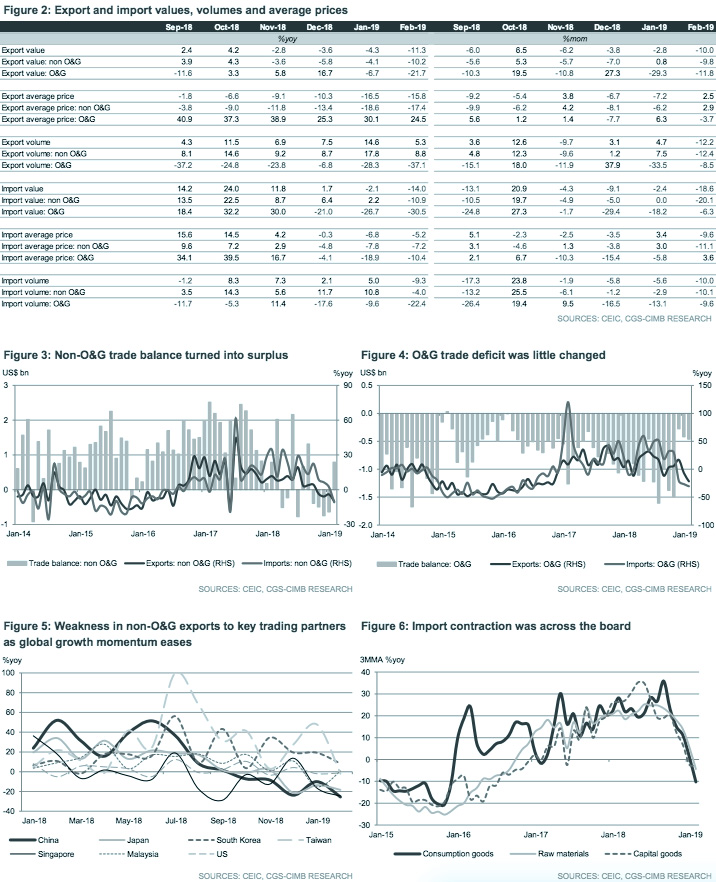 Originally published by CIMB Research and Economics on 15 March 2019.