Government to retain current fuel and electricity prices till end-2019
The government plans to keep fuel and electricity tariffs unchanged until end-2019, with the aim of preserving household purchasing power. It will also seek parliament approval to raise solar diesel subsidy from Rp500 per litre to Rp700-1,000 per litre. This suggests that government and state-owned enterprises i.e. Pertamina and PLN are likely to share the burden of higher subsidies, given that oil prices are 33% higher than the US$48 per barrel assumed under the State Budget, whereas Rp/US$ is 1% weaker.

Additional subsidy spending of Rp8.1tr-12.8tr for 2018F
This will translate to an additional subsidy expenditure of about Rp8.1tr-12.8tr (0.1% of GDP) for the government – Rp3.1tr-7.8tr for solar diesel and Rp5tr for electricity. We think the fiscal impact is manageable given that the government will also receive higher O&G revenue as a result of higher oil prices. Under the State Budget 2018, O&G revenue accounts for 0.9% of GDP, higher than the 0.6% of GDP for subsidy spending.

Revise 2018 average inflation forecast lower to 3.4% yoy
We revise our 2018 inflation forecast lower to 3.4% yoy. Our earlier forecast of 3.7% yoy factored in a mild 7-10% increase in fuel prices, and 31bp contribution to the full-year inflation rate. As the gap between pump and market prices widens, the government risks making larger adjustments later (after 2019), which may pose upside pressure on inflation rate, and perhaps monetary policy. Based on Ministry of Finance (MoF) Regulation No.124 of Year 2017, the government intends to bring inflation rate lower, from 2.5-4.5% in 2018-2019 to 2-4% in 2020-2021.

Reiterate our 2018 GDP growth forecast of 5.3% yoy
Keeping both fuel and electricity prices unchanged should bode well for private consumption, especially among the lower-income households. We reiterate our GDP growth and end-year policy rate forecasts of 5.3% yoy and 4.25% for 2018F, respectively.

The relation between oil prices and state budget
The key concern for subsidised fuel price adjustment arise mainly due to the impact on the state budget, as the YTD average oil price is much higher than the US$48 per barrel assumed under the State Budget 2018. The oil price movement affects Indonesia’s fiscal position through both the revenue and expenditure channels:

Premium gasoline passes the baton to 3kg LPG
Major reforms on fuel subsidy began in Jan 2015, an opportunistic move undertaken by the government at a time when global crude oil prices were going downhill, therefore it did not result in a net increase in fuel prices. Such a decision has been positively lauded by international organisations and market observers, as it alleviates the subsidy burden on government budget, and channels the savings into more productive spending such as infrastructure, education, healthcare and more targeted social assistance programmes. Following the reforms, fuel subsidies declined significantly to 0.5% of GDP or lower (vs. 2.5% of GDP in 2012 and 2.6% of GDP in 2008). Key reforms included the removal of gasoline subsidy, as well as the replacement of variable subsidy scheme for diesel with a fixed subsidy scheme:

Current subsidised fuel prices to stay till end-2019
Please note the analysis only focuses on solar diesel and premium gasoline. Fuel subsidy also includes kerosene and 3kg LPG tanks, which is not discussed in this section.

The key concern for subsidised fuel price adjustment arise mainly due to the impact on the state budget, as the YTD average oil price is much higher than the US$48 per barrel assumed under the State Budget 2018. The oil price movement affects Indonesia’s fiscal position through both the revenue and expenditure channels:

We calculated the market prices for solar diesel and premium gasoline based on the formulae stipulated in the Ministry of Energy and Mineral Resources (ESDM) Decree No. 2856 of Year 2015 and Decree No. 2371 of Year 2017. According to the Decree No. 2856 of Year 2015, the market fuel price is made up of base price and taxes (value-added tax and motor vehicle fuel tax). The base price comprises the production costs, distribution costs, and storage costs as well as a predetermined margin. Both production costs and distribution costs are a function of market price index, which are outlined in the Decree No. 2371 of Year 2017.

The two determinants of market fuel prices in Indonesia are global oil prices and the Rp/US$ exchange rate. Hence, we compare the current subsidised price of Rp5,150 per litre for solar diesel and Rp6,450 per litre for premium gasoline against the market prices, at various oil price and Rp/US$ levels (Figs 11 and 12). Our calculation indicates that the current subsidised price is below market price, at US$40 per barrel and above for solar diesel, and US$46 per barrel and above for premium gasoline. Furthermore, we estimate that every 1% increase in oil price and/or 1% depreciation in Rp/US$ would raise market prices by an average of 0.92% for solar diesel, and 0.87% for premium gasoline. If the government chooses not to alter retail fuel prices in line with market fuel prices, there should be no material impact on fiscal subsidy expenditure, all else being equal, as the burden of the adjustment will be borne by Pertamina. This was evident in 2017, when solar diesel subsidies declined 7% due to lower consumption, despite oil prices exceeding the revised State Budget assumption by 7%.

Opportunity costs for keeping fuel prices below market prices
While keeping solar diesel and premium gasoline prices unchanged does not directly increase the government’s fuel subsidy spending, there are still opportunity costs to the State Budget in the form of revenue foregone. As a base case scenario, we estimate the revenue foregone (i.e. VAT, motor vehicle fuel tax, income tax, and dividend payment by Pertamina) under the existing fuel pricing mechanism (no subsidy for premium gasoline and Rp500/litre subsidy for solar diesel by the government). Based on average Brent price of US$67.45 per barrel and Rp13,486 per US$ in the first two months of the year, we deduce that solar diesel is underpriced by 40%, and premium gasoline by 29%. Further dissecting the deviation shows that 87% of the price gap represents revenue foregone by Pertamina (in the form of implicit subsidy), whereas 13% reflects tax revenue loss by the government for not adjusting retail fuel prices higher. The revenue foregone by Pertamina translates to lower income tax and dividend payment to the government. We estimate that by keeping fuel prices at the current level, the government is giving up extra revenue of Rp75.5tr p.a., or 0.5% of GDP, assuming corporate income tax of 25%, dividend payout ratio of 35%, and annual consumption of 15.6m kl for solar diesel and 29.6m kl for premium gasoline. 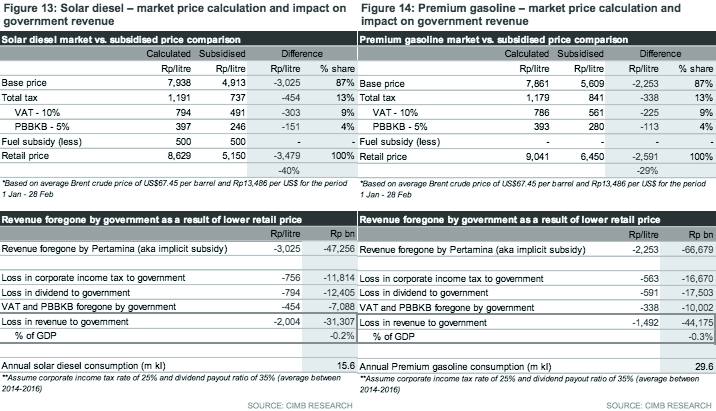 Impact on fiscal position for raising diesel subsidy
The government intends to raise solar diesel subsidy from Rp500 per litre to Rp700-1,000 per litre, reflecting a 40-100% increase. We see this as a move to reshuffle the subsidy burden between the government and Pertamina on the back of rising global oil prices, as well as compensation to the state-owned O&G giant for continuing to sell subsidised fuels at current pump prices until 2019. Note that Pertamina is the one bearing the costs of selling subsidised fuels at below-market prices over the past two years, as fuel prices were last changed in Apr 2016. Furthermore, the reduction in diesel subsidy on 1 Jul 2016 did not lead to any changes in diesel pump price. Hence, the increase in per litre subsidy this time round will not translate into lower pump price, in our view. If diesel subsidy is raised to Rp700-1,000 per litre, we estimate an additional Rp3.1tr-7.8tr in subsidy spending by the government, but this will be partly compensated by the increase in government revenue of Rp1.8tr-4.5tr. Hence, the net increase on fiscal deficit is Rp1.3tr-3.3tr, a miniscule increase of 0.01- 0.02% of GDP. 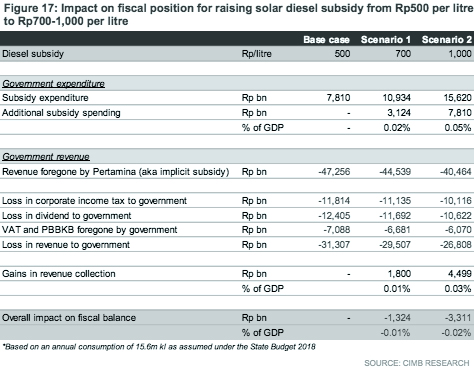 Keeping electricity tariffs unchanged to cost government an additional Rp5tr in subsidy
On the back of rising oil and coal prices, the government recently decided to cap the domestic sales of coal to the power industry at US$70 per metric tonne. This move aims to alleviate the financial burden of PLN, by allowing PLN to purchase coal at below-market price, effective 12 Mar 2018 until 31 Dec 2019 (through ESDM Decree No.1395 of Year 2018 and Decree No.1410 of Year 2018), hence reducing the pressure on the government to revise electricity tariffs higher. Since electricity reforms commenced in 2013, the electricity subsidy has declined significantly from the peak of 1.2% of GDP in 2011 to a projected 0.3% of GDP under the State Budget 2018. The subsidy is currently provided for 23.2m 450VA customers and 6.5m 900VA household customers. By keeping electricity tariffs unchanged, the ESDM estimated that the government would incur an additional Rp5tr (0.03% of GDP) in electricity subsidy this year, a 10% increase from Rp47.6tr under the State Budget 2018.