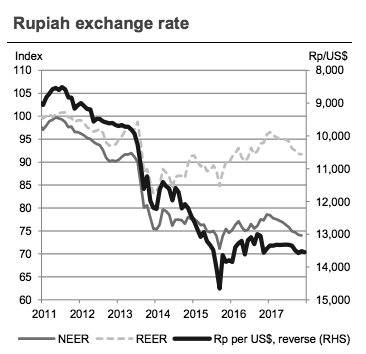 No change to 7-day Reverse Repo Rate
Bank Indonesia (BI) kept the 7-day Reverse Repo Rate (7DRRR) at 4.25%, in line with our and market expectations. The Deposit Facility Rate and Lending Facility Rate were maintained at 3.50% and 5.00%, respectively. The central bank decided to accelerate the implementation of average minimum reserve requirement ratios and set the financing-to funding ratio at 80-92%.

Loosening average daily minimum reserve requirement ratios
Effective 16 Jul 2018, conventional commercial banks will be allowed to keep a minimum 4.5% of their rupiah deposits at BI daily (from 5% currently) but are obliged to maintain at least 6.5% over a two-week period. The implementation of the reserves averaging mechanism, which started on 1 Jul 2017 and is aimed at improving banks’ liquidity management, will be extended to conventional forex deposits and Islamic banks, effective 1 Oct 2018 (Figure 2). Meanwhile, the financing-to-funding rule aims to better capture the excess liquidity through the inclusion of bank-purchased securities. The impact on credit growth in the short run should be negligible given ample liquidity.

Stronger economic growth expected for 2018…
The economic expansion in 4Q17 remained supported by investment activity despite weaker net exports and sluggish consumption. Hence, BI forecasts the economy to grow 5.1% yoy in 2017 (in line with our forecast), with a projected acceleration to 5.1-5.5% in 2018 (vs. our estimate of +5.3% yoy) on the back of stronger domestic demand.

… with controlled inflation rate
Headline inflation remained low in 2016-2017 amid manageable food and administered inflation. Nonetheless, inflation risk remains closely monitored to preserve household purchasing power. A supply shortage recently led to a surge in rice prices beyond price ceilings set by the government and the decision to import 50,000 tonnes of rice from Vietnam and Thailand. Meanwhile, rising oil prices could pose some upside risks if it leads to upward adjustment on administered prices (i.e. fuel and electricity tariffs). We expect the inflation rate to average 3.7% in 2018, within BI’s target range of 2.5-4.5%.

Continuous improvement on external resilience
Despite an unexpected trade deficit in Dec, the annual trade surplus was at its highest in 6 years, on track to keep current account deficits in check. The continuous improvement in external resilience and healthy fiscal deficits won the country a sovereign rating upgrade from Fitch in Dec (from BBB from BBB-), following a similar move by S&P in May (from BB+ to BBB-), hence supporting foreign capital inflows and rupiah stability. All in, international reserves rose to a historical high of US$130.2bn in Dec 2017.

Expect BI to hold policy rate throughout 2018
The central bank reiterated that its monetary stance remains neutral and the window for further rate cuts is closing. Monetary policy normalisation remains a key external risk, especially on the potential shift in monetary policy guidance by European Central Bank (ECB) and Bank of Japan (BOJ) amid optimism over economic growth. To that end, we expect BI to hold its policy rate throughout 2018.