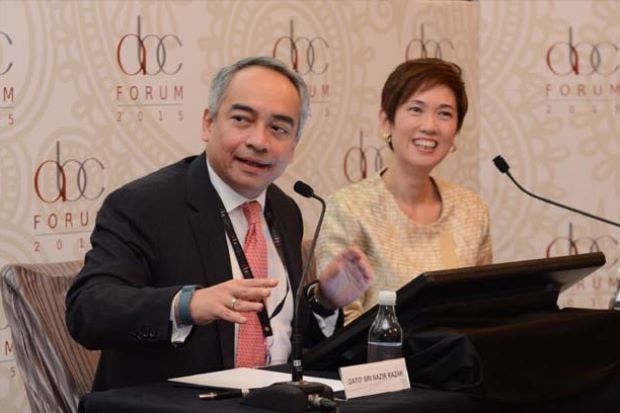 Nazir: ‘I hope Indonesia will take the lead in driving the AEC initiative.’ With him is Josephine Teo, Singapore’s Senior Minister of State at the recent 2015 ABC Forum in Singapore.

Nazir: ‘I hope Indonesia will take the lead in driving the AEC initiative.’ With him is Josephine Teo, Singapore’s Senior Minister of State at the recent 2015 ABC Forum in Singapore.

SINGAPORE: Indonesia’s seeming lack of enthusiasm towards Asean economic integration is pouring cold water on the ambitious initiative of creating a single market and production base in the region by the end of this year.

While other member states of Asean, including Malaysia, have been busy ironing out the hurdles posed by their respective regulatory and policy framework to achieve the vision of an Asean Economic Community (AEC), the success of the scheme has come into question due to Indonesia’s lukewarm reception to the idea.

A staunch proponent of the AEC, Nazir, also co-chair of Asean Business Club (ABC), said the sheer size of Indonesia’s economy made the country’s commitment to and participation in the AEC critical in ensuring the success of the vision.

With a gross domestic product (GDP) of US$870bil, Indonesia is the largest economy in Asean.

It also boasts the largest market size in the region given its huge population of about 250 million.

“I hope Indonesia will take the lead in driving the AEC initiative,” Nazir said at the third annual ABC Forum, themed “Road to ASEAN Integration”, which was held in Singapore recently.

Jointly organised by CIMB Asean Research Institute (CARI) and the ABC – an association of the chief executives of Asean’s most important business enterprises – the annual forum aims to bring together leaders from both the public and private sector across the region to promote the AEC initiative.

But the absence of Indonesian delegates at the recent forum was conspicuous, raising doubts over the country’s commitment to the vision.

Expressing his anxiety over the stand of Indonesian President Joko Widodo, or popularly known as Jokowi, on the AEC, Nazir said:

“Indonesia’s commitment towards the AEC has been ambiguous (under the current leadership)… we are waiting for Jokowi to officially state his stand on the AEC.”

Nazir pointed out that unlike his predecessors, who were clearly more supportive of regional economic integration, Jokowi, who took office last October, had yet to show much interest in the AEC, which could collectively boost the growth of the 10 member states of Asean and enhance the wealth of the peoples.

The AEC, which envisages a single market and production base in Asean, with free movement of goods, services, investments, skilled labour and freer flow of capital, was supposed to come to fruition by the end of 2015.

However, given the current implementation rate of the AEC initiative at 90.5%, regional policymakers had conceded that full integration of Asean economy would not be realised by the end of this year.

Regional policymakers were currently working towards achieving a 95% implementation rate by the end of this year.

According to Malaysia’s Minister of International Trade and Industry Datuk Seri Mustapa Mohamed, Asean policymakers must demonstrate greater political will and address various issues such as the developmental gap among the 10 member states in order to accelerate the regional integration process.

“While we have made significant progress towards integrating our economies, there is still a lot more work to be done,” Mustapa said in his keynote address at the recent ABC Forum.

The 2015 ABC forum chairman, U Thura Ko Ko from Myanmar, noted there were tremendous opportunities if all Asean economies could get their act together to realise full regional economic integration.

“Collectively, Asean is increasingly recognised as a major global economic and trading powerhouse, but more needs to be done to bring the full benefits of economic integration,” Ko said.

With a combined population of about 625 million, Asean accounts for nearly 9% of the world’s population, and as a single economy, the region would be seventh largest in the world with a combined GDP of US$2.4 trillion.