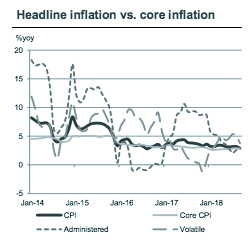 Further normalisation in food prices post-festive season
On a month-on-month basis, the consumer price index (CPI) contracted for the second consecutive month in September (-0.2% mom vs. -0.1% mom in August), led primarily by further easing in food prices (-1.6% mom vs. -1.1% mom in August). All but two food categories recorded monthly deflation in September, with the steepest price cuts for meat, eggs and spices. Meanwhile, airfares continued to ease after the Asian Games (18 August – 2 September), resulting in declining transport inflation (-0.1% mom vs. -0.2% mom in August) which offset price gains in transport equipment and support (+0.3% mom vs. +0.4% mom in August).

2018 inflation forecast revised lower to 3.2% yoy
Non-O&G import wholesale price inflation (WPI) quickened to an 18-month high of 4.2% yoy in September, most likely driven by higher import taxes, in our view. Although the monthly PMI survey by Nikkei/Markit indicated that manufacturers have been passing on higher costs to customers, primarily due to weaker rupiah relative to US$, the impact on headline inflation numbers is benign. Moreover, fuel prices are still capped by the government despite higher global oil prices, with higher costs being shared by the government and Pertamina. The government issued a regulation in August to raise per litre subsidy for diesel from Rp500 to Rp2,000, which will apply retroactively from 1 Jan 2018. As the headline inflation has undershot our expectations for five months, we fine-tune our 2018 inflation forecast from 3.4% yoy to 3.2% yoy. 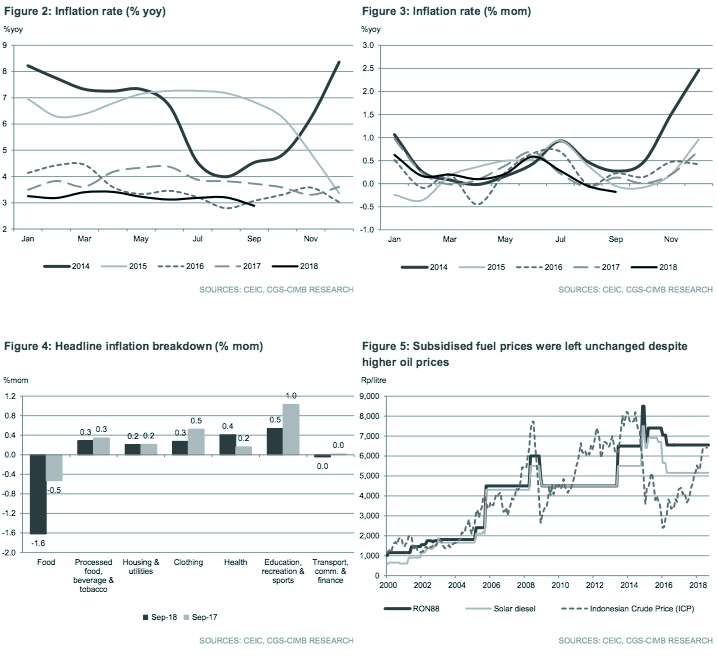 Originally published by CIMB Research and Economics on 01 October 2018.