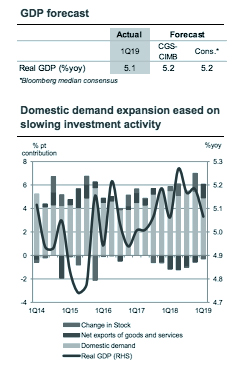 Policy continuity post elections to support economic expansion
Despite missing expectations, 1Q19 GDP growth was the strongest compared to the same quarter in the past four years. We expect investment growth to pick up in the upcoming quarters, supported by stronger investor confidence with Jokowi likely to be reelected. Policies promoting consumer price stability, civil servants’ salary hikes and social assistance for low-income households should support consumption growth, leading us to tweak our 2019 GDP growth forecast up from 5.1% to 5.2%.

1Q19 investment growth of 5% yoy was the lowest in two years, partly due to high base effects in machineries, vehicles and other equipment, in tandem with falling imports of capital goods. National strategic projects continued to support building & structures spending (+5.5% yoy in 1Q19 vs. +5.0% yoy in 4Q18). 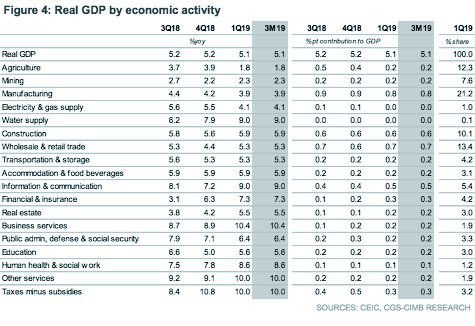 Agriculture GDP growth was at a three-year low of 1.8% yoy in 1Q19 amid lower production of farm food crops. Steady growth in the mining sector was supported by continued expansion in coal mining and a smaller decline in O&G mining.
Manufacturing GDP growth eased to 3.9% yoy (+4.2% yoy in 4Q18) as activity declined in the manufacture of transport equipment as well as the downstream commodity segment, i.e. O&G, coal, rubber, wood, non-metallic quarrying.
Construction activity (+5.9% yoy vs. +5.6% yoy in 4Q18) was stronger amid a pick-up in buildings & structure investment.
The services sector was supported by wholesale & retail trade, information & communication, finance & insurance, real estate, business services and education. 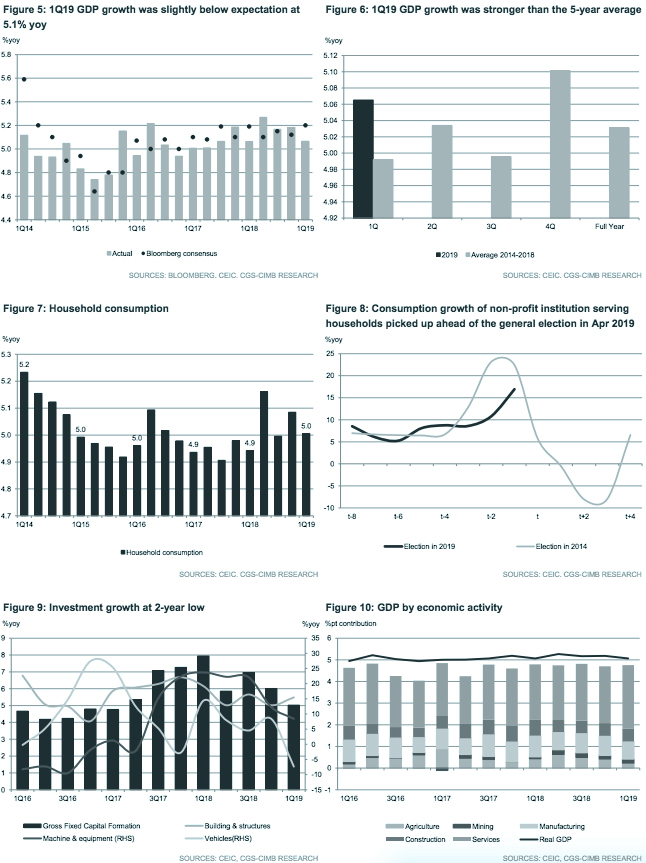 Originally published by CIMB Research and Economics on 7 May 2019.