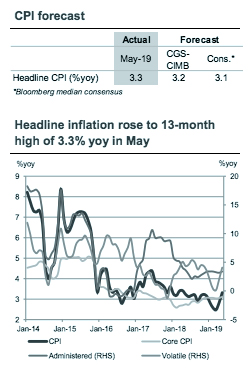 May’s headline inflation at the highest since April 2018…
Indonesia’s headline inflation in May was higher than expected at 3.3% yoy (+2.8% yoy in April), mainly driven by food and transport components. Despite posting the strongest pace of increase since Apr 2018, price stability remained anchored within Bank Indonesia’s (BI) target range of 2.5-4.5%. Excluding administered price and volatile food inflation, however, core inflation remained steady at 3.1% yoy.

… in conjunction with seasonal festivities
Seasonally-higher demand during Ramadan, which started 11 days earlier this year vs. last year, lifted the month-on-month increase in the consumer price index (CPI) to 0.7% mom (+0.4% mom in April), the strongest rate compared to the monthly price increases during the fasting month in 2014-2018.

Dovish shift in global monetary policy outlook
Global economic developments have taken a turn for the worse over the past month, amid intensifying trade tensions between the US and China that saw both countries escalating tariffs on each other’s goods after an eight-month hiatus since the last round of tariff actions in September. Risks to global economic prospects remained tilted to the downside with the US threatening to impose tariffs on at least US$300bn worth of imports from China, prompting the US Fed to signal a willingness to lower policy rates.

Year-end forecast under review, but expect BI to stand pat in June
Potential monetary policy easing by the US Fed should bring forward rate cuts by BI, following aggressive rate hikes last year in response to Fed rate hikes, among other factors. We are currently reviewing our year-end 7-day reverse repo rate (7DRRR) forecast of 6.00%. Pending tariff decision by the US on the remaining Chinese exports to the US in Jul as well as concerns on Indonesia’s current account deficit (CAD) which tends to widen in 2Q, we expect BI to stand pat in its upcoming Board of Governors meeting on 19-20 June. 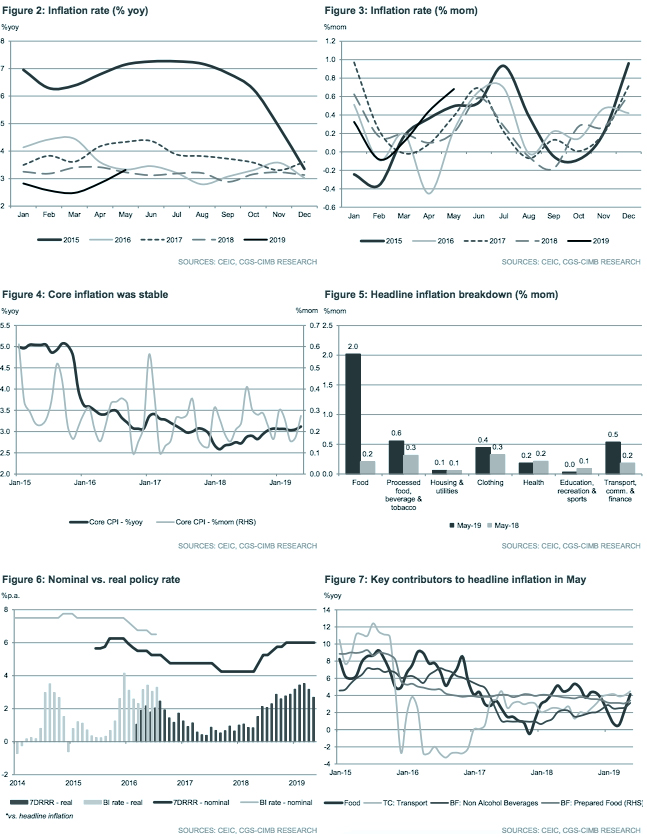 Originally published by CIMB Research and Economics on 10 June 2019.