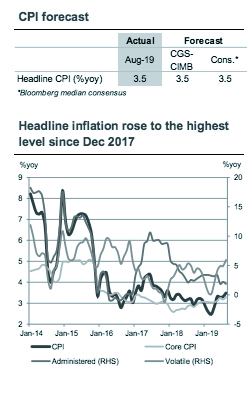 Headline inflation rose to 3.5% yoy in August, highest since December 2017
Indonesia’s headline inflation accelerated to a 20-month high of 3.5% yoy in August (+3.3% yoy in July), in line with our and market expectation. On a month-on-month basis, the consumer price index (CPI) rose 0.1% mom in August, in contrast to marginal declines registered for the corresponding months in the past three years. Core inflation, which excludes volatile food and administered price inflation, rose to 3.3% yoy (+3.2% yoy in July), the highest since February 2017.

Drought raised food inflation
Drought, rising gold prices and school fees were the key drivers of the higher inflation in August. The sequential decline in food prices was milder at 0.2% mom last month, compared to an average decline of 0.8% mom in August 2016-2018. As a result, annual food inflation rose to 5.8% yoy (+4.8% yoy in July), the highest since November 2016, as supply disruption due to drought lifted prices of chillies and peppers. Prepared food inflation was steady at 3.5% yoy (+3.6% yoy in July).

Core inflation lifted by gold jewelries and education costs
Meanwhile, lower airfares brought down transport inflation to 2.1% yoy in August (+2.8% yoy in July). Among the core components, surging gold prices amid external uncertainties resulted in higher clothing inflation (+5.2% yoy vs. +4.2% yoy in July), whereas rising education inflation (+4.2% yoy vs. +3.7% yoy in Jul) coincided with the start of a new school year.

Inflation forecast raised to 3.1% for 2019F
Taking into account the headline inflation performance YTD, we raise our 2019F average inflation forecast to 3.1%, from 3.0% previously. In its draft state budget 2020 (RAPBN 2020), the government projects energy subsidies to decline a meagre 3.6% to Rp138tr in 2020, or 0.8% of GDP (vs. Rp143tr, or 0.9% of GDP in the outlook for 2019), indicating that the government is likely to leave fuel and electricity prices unchanged to maintain household purchasing power and support consumption growth in the country. As such, we expect headline inflation to remain steady at 3.1% yoy in 2020F. As price pressure remains well within Bank Indonesia’s (BI) target range of 2.5-4.5%, we expect the central bank to lower the 7-Day Reverse Repo Rate (7DRRR) by another 25bp this year, after having delivered 50bp cuts in July – August. 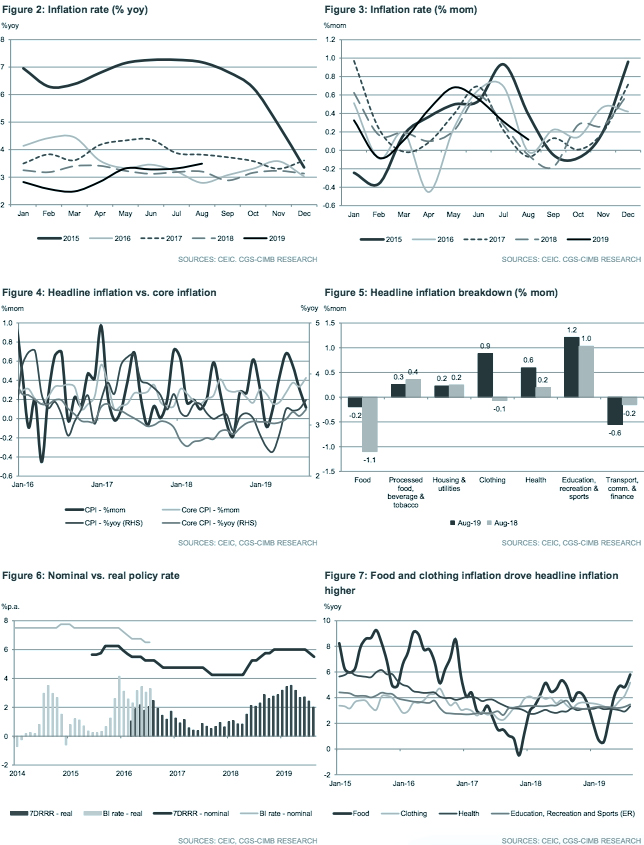 Originally published by CIMB Research and Economics on 2 September 2019.