Home / News & Views / Commentaries / Is US economic dominance over? And what can ASEAN do about it?

Is US economic dominance over? And what can ASEAN do about it?

CARI Commentaries: Is US economic dominance over?
And what can ASEAN do about it?

(This article contains 3 charts and best viewed on a desktop or horizontally on your mobile.)

Much has been said recently of America’s ‘decline’ on the world stage, with frequent narratives on American global primacy ceding ground to an unstoppable China. Indeed, an ASEAN-wide policy survey released in January 2020 by the Singapore-based ISEAS-Yusof Ishak Institute saw only 7.9% of respondents label the US as the most influential economic power in Southeast Asia (in comparison to a whopping 79.2% for China), while a further 47% had ‘little or no confidence’ in Washington as a strategic partner and provider of regional security. These findings reflected larger beliefs within certain circles of America’s retreat from not just the Asia Pacific but the larger international stage.These attitudes are understandable. It is true that the hostility of the Trump administration towards free trade, international institutions, and traditional allies has dismayed those of us who champion the merits of globalization and international cooperation, and paints an image of an America no longer interested in upholding the global international order (which smaller powers like ASEAN rely upon to safeguard their sovereignty).

However, we risk tunnel vision by focusing solely on the words (or in this case tweets) and actions of the President in lieu of the raw metrics of global power; namely within the economic sphere. As ASEAN seeks to navigate an increasingly fraught international order, its leaders should not succept to notions of excessive American declinism. I argue that America’s economic, technological, and financial lead, among the key pillars of global influence, will remain secure for the foreseeable future. Regardless, as a hegemonic America contests a rising China, ASEAN must respond accordingly to maintain its cohesiveness and regional centrality.

Too big to fail

Lost in much of the fretting on American declinism is the massive lead the American economy continues to hold over China, despite four decades of rapid growth for the latter. The total output of the U.S. economy in 2019 was US$21.4 trillion, significantly larger than China’s output of US$14.3 trillion. On a per-capita basis, the division becomes more stark – US$65,280 to US$10,261 (at current US$). 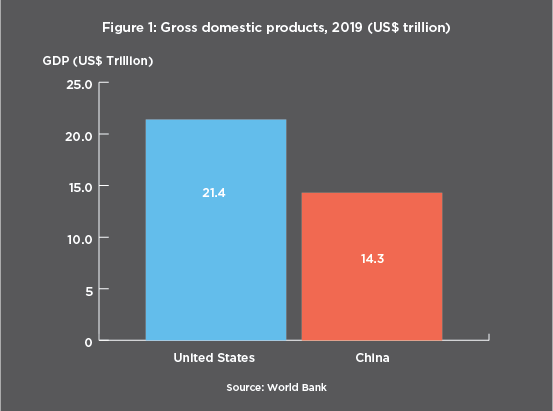 America’s share of the world economy has remained virtually unchanged since 1980, when it accounted for 25.2% of world GDP. As of December 31, 2018, the US share only dropped to 23.9%. Over the same period, Japan’s share of world GDP fell from 9.7% to 5.8%, while the European Union’s share fell from 34.6% to 22%. This suggests that China’s rise has been at the expense of other countries’ share of the global economy, rather than that of the U.S.


Can China ever catch up?

Furthermore, China’s economy had already been slowing since peaking at 14.2% growth in 2007, before dropping to 6.6% in 2018. As Derek Scissors of the American Enterprise Institute argued, the sooner China slows down, the less likely it will be able to catch up with the US. While the Chinese Communist Party (CCP) insists that China will experience a gradual slowdown, internal factors suggest a more rapid slowdown would not be out of the question. In the aftermath of the pandemic, China watchers warned that the CCP had doubled down on the debt-fueled, state-directed investment strategy which characterized their response to the 2008 Global Financial Crisis.

As observed by late Indian economist Deepak Lal, the aftermath of the big surge in public spending post-2008 saw industrial producer prices falling steadily since 2011. This deflation was partly attributed to the glut in production in major Chinese industries such as steel, coal, glass, aluminium, solar panels, and cement. While this may inflate China’s baseline output (and therefore GDP), the question is whether these add value to the economy.

This emphasis on massive infrastructure investments (conducted largely through state-owned enterprises) will arguably prove a drag on future growth. The crowding out of private investments makes it harder for China to transition from an investment-driven economy to a consumer-led one, a long-stated goal of the CCP. Household consumption as a percentage of GDP in China remains relatively low at 38.7% in 2018 – on par with countries such as Algeria and Gabon. In comparison, household consumption in the U.S. measured at 68.1%. A lack of competition also hinders productivity growth – data from The Conference Board found that China’s projected level of output per worker in 2019 was only 22% of that of America’s.

Productivity growth remains the engine of capitalism, and is more often than not driven by technological development. While much has been made about the so-called ‘tech war’ between the US and China, the U.S. largely remains at the forefront of technological innovation. The 2019 edition of the Global Innovation Index (GII), considered the most comprehensive measurement system of global innovation, ranked the US third worldwide, with China at a respectable 14.

Furthermore, a February 2020 report by the Centre for Strategic and International Studies (CSIS) noted that while China has become more innovative since 2017, it still suffers from low innovation efficiency (meaning that the significant amount of resources thrown into innovation still produces a smaller level of outputs). The report warned that certain metrics used to demonstrate Chinese innovative excellence can be misleading. For instance, although China is the world’s largest patent producer, about two-thirds of the patents produced every year tend to be utility model patents (defined by the World Intellectual Property Organization as providing protection for ‘minor inventions’ based on incremental improvements to existing products), while only a third can be considered ‘higher-quality invention patents’.

In key sectors such as semiconductors, Jonathan Curtis of Franklin Templeton Investments concluded that Chinese equipment and device manufacturers are still heavily reliant on U.S.-manufactured semiconductor components and technology, a state of affairs they will not be able to change anytime soon. In other areas such as e-commerce platforms and new-electric vehicles, China has been more successful.

Without a major boost to productivity, China will instead have to rely on the sheer scale of its market. However, current demographic projections suggest another barrier China may struggle to overcome. Indeed, a recent forecast by the United Nations World Population Division projected that the number of working-age Chinese (age 15-64) will fall by almost half between now and 2100, while the number of Americans of working age will rise by about 14.2% (see Figure 2). 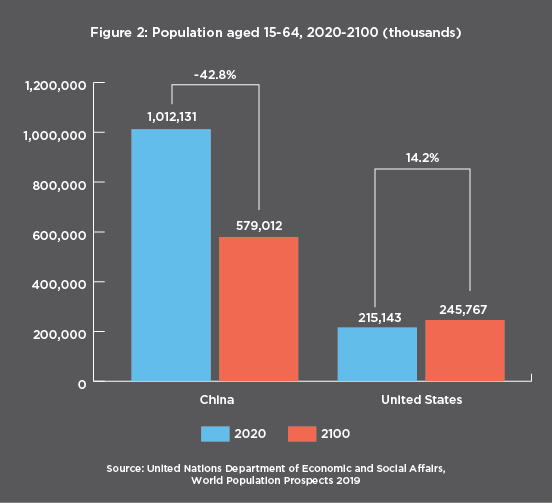 But what about purchasing power?

OK, you may say, by sheer economic output the U.S. still leads. But what if we adjust GDP by purchasing power parity (PPP). Doesn’t that already show China as having overtaken the U.S.? As argued by Scissors, comparing the U.S. and China through PPP can be misleading.

Scissors notes that while applying PPP is sensible in that prices for similar items vary across borders, they are also problematic in that prices often vary within borders. For example, it would be impractical to assume prices are constant from Kuala Lumpur to Kota Kinabalu in Malaysia. As well, the measurement of PPP requires open markets to eventually force the prices of similar products to converge. However, this often does not hold when it comes to the trade in goods and services (even between linked economies such as Chinese provinces), and more so for investments goods – especially for countries with restrictions on the movement of capital such as China.

Furthermore, GDP does not necessarily measure the size of an economy, but annual economic activity. As already discussed, not all economic output adds value to an economy. Scissors argues a better indicator of the size of an economy is national wealth – the value of real estate, stocks, and other assets (which accumulate over time). By this metric, the U.S. remains far ahead of China, with Credit Suisse’s estimations of U.S. total household wealth in 2019 standing at US$106.0 trillion, compared to China’s US$63.8 trillion. 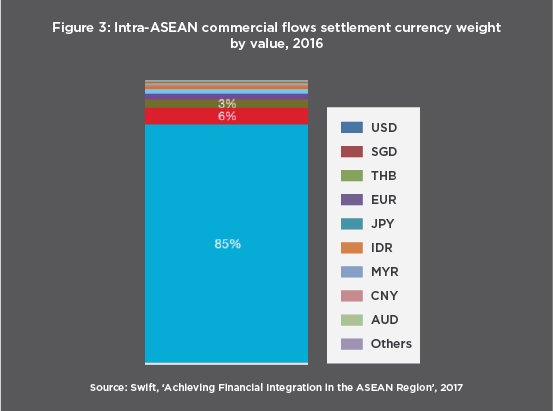 Wall Street remains the financial trading centre of the world, with the New York Stock Exchange alone worth US$23.12 trillion in market capitalization in March 2018 – nearly 40% of the world’s total stock market value. By comparison, the world’s fourth largest global exchange, the Shanghai Stock Exchange, only measured at US$5.01 trillion. Even when combining the three independent stock exchanges of the PRC – Shanghai, Shenzhen, and Hong Kong, – China remains smaller than that of the U.S.

Contrary to narratives of the U.S. being left behind in the burgeoning field of fintech, the GFCI 27 ranked New York first in competitiveness in fostering the Fintech industry (overtaking Beijing from the previous year). With Silicon Valley and Wall Street having long dabbled in the development of financial innovations, it is argued by former U.S. Secretary of the Treasury, Henry M. Paulson, Jr. that the U.S. private sector stands in a good position to spearhead the development of safe and secure digital currencies, while developing the necessary controls against usage in illicit activities.

As argued by Paulson, Jr., the rapid development of Fintech in China – including digital payment systems and a pilot digital RMB project by China’s central bank- will most probably not pose a serious threat to the global dominance of the U.S. Dollar. As Paulson explains, ‘A digital RMB would still be a Chinese RMB. No one is reinventing money.’

Between a Rock and a Hard Place

ASEAN should not be too quick to discount continued American global influence. While the rise and fall of great powers is a historical given, the significant lead held by the U.S. in the world economy, technological innovation and global finance alongside China’s internal challenges of low productivity, demographic decline, and chronic underconsumption suggests to me that Pax Americana is here to stay for the foreseeable future.

Regardless of whether the future validates me or not, an accelerating Sino-US competition in the region can only bode ill for ASEAN. The cohesiveness of the regional bloc will be tested, as individual Member States come under pressure to choose sides. To preserve regional independence and centrality, ASEAN must start to walk-the-talk when it comes to greater ASEAN integration, including greater intra-regional trade and investments.

America will remain powerful. China will grow powerful. But there’s no reason why ASEAN, with its expanding middle class, fast growing economies, and geographical centrality, cannot become powerful as well.