CARI Commentary: “Translating more commitments to actions is key to next phase of ASEAN Community building” 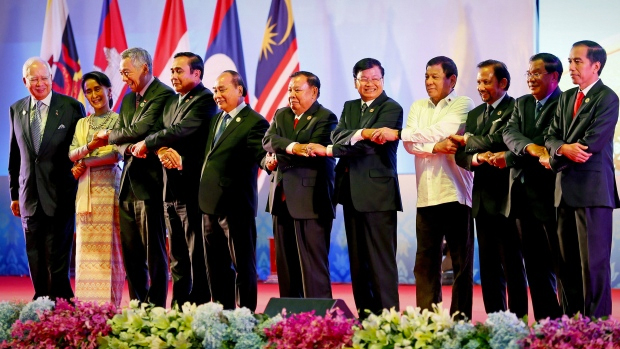 The ASEAN Summits of 2016 were recently concluded last week in Vientiane, Lao PDR. For the first time, the usually two Summits in a calendar year – one in April and one in November – were held back to back in the same week, this time in September. As explained by the Lao Foreign Ministry, the 28th ASEAN Summit focused on the internal ASEAN Community building and integration efforts, particularly how the ASEAN Vision 2025 will be achieved. On the other hand, the 29th ASEAN Summit, similar to the usual second summit of the year, aimed at strengthening ASEAN’s cooperation with its dialogue partners and reiterating the future direction of the cooperation. The 29th Summit also discussed relevant regional and international issues of common interest and concern. In that regard, the ASEAN+1 Summits, as well as the 19th ASEAN+3 (ASEAN plus China, Japan and Korea) Summit and the 11th East Asia Summit (ASEAN+3 plus Australia, New Zealand, Russia and United States), assessed the current progress, and discussed future direction and regional and international issues.

There were some interesting facts from the series of events during the 28th and 29th Summits. President Rodrigo Duterte of the Philippines, who will chair the regional group in 2017, had his bilateral with President Barack Obama cancelled following a spat between the Philippines and the US regarding the Philippines’ government fights against drug trades and terrorists. Nonetheless, he reportedly managed to impress his fellow Southeast Asian Leaders with his insights on the global issues and his diplomatic decorum. For President Obama, this was his last opportunity to liaise with his East Asian counterparts as the US Leader. He reiterated US’ commitments to deepen engagement with ASEAN in terms of political and security matters, and to continuously improve trade and investment relations with ASEAN. China, being the first strategic partner to ASEAN, voiced similar commitments. China was the first country to support the protocol to the treaty of Southeast Asia nuclear free zone, as well as being the first to commence free trade talks with ASEAN. The Chinese Leader also maintained that political stability in the East Asian region would be of the utmost importance in forging closer cooperation to bring the economic ties to a higher level.

Nonetheless, the most anticipated outcome of the Summits was the commitments of the Leaders in realizing the ASEAN Economic Community (AEC), which would also cover the efforts of ASEAN in establishing the FTAs with its dialogue partners. Perhaps the most interesting is the negotiations under the Regional Comprehensive Economic Partnership (RCEP) in which the ten ASEAN Member States (AMS) attempts to formulate a single agreement that would govern ASEAN’s economic relations with the closest dialogue partners (China, Japan, Korea, India, Australia and New Zealand). The combined output of the RCEP participating countries constituted 30.6 percent of the global output of 2015, or around USD22.4 trillion. The total trade among them amounted to USD11.9 trillion, while inflows to those countries reached USD329.6 billion during the same period. While the negotiations have not been easy, some progress has been achieved. It remains to be seen whether the RCEP negotiations will proceed smoothly. Dr Chia Siow Yue of the Singapore Institute of International Affairs (SIIA) early this year noted the difficulties for RCEP to move forward and offered several challenges that the RCEP must overcome: different levels of development among the participating countries, complexities in the agricultural sector where some countries are efficient exporters while others are very protective towards that sector, and intricacies within the existing FTAs that wished to be coordinated through the RCEP. These problems have not been accurately and properly addressed simply because they are just too complicated. While the Leaders have expressed their commitments to continue the negotiations in a positive spirit, it may be advisable to set a more realistic timeline for the conclusion of the RCEP after the 2015 deadline was passed without any significant outcome.

Under the East Asia Summit (EAS) framework, the Leaders reignited their commitments to support for the ASEAN Community building process and supported ASEAN’s role in the EAS development. The EAS cooperation covers sectors from the three pillars of the ASEAN Community, from energy, education, finance, health, environment and disaster management, connectivity, disarmament and non-proliferation, and food security and safety. The EAS also talked about the most recent global and regional issues such as the South China Sea disputes, Korean Peninsula nuclear tests, and refugees/migrants issues. With regard to the regional economic cooperation, the EAS restated their commitments to enhance the existing engagements through continuous support to the RCEP negotiations and welcomed the progress made by the 4th EAS Economic Ministers’ Meeting.

The individual Summits with each ASEAN Dialogue Partner too came up with commitments on many different areas, ranging from combating terrorism, connectivity to disaster management. Most Dialogue Partners are Members of the EAS and therefore they continued to state their commitments to the RCEP negotiations. Japan, as the second largest trading partner of ASEAN and the second largest source of FDI flow to ASEAN has committed to supporting the efforts to narrow the development gap in ASEAN through the Initiative for ASEAN Integration (IAI) Work Plan 2016-2020. In the case of China, ASEAN Leaders acknowledged that positive developments in China would be beneficial and important to ASEAN. China was committed to deepen the scope and activities of the ASEAN-China Free Trade Agreement (ACFTA) and to support 2017 as the ASEAN-China Year of Tourism. India has increasingly become an important economic partner for ASEAN. FDI from India doubled to USD 1.2 billion in 2015. Australia has become an important supporter of ASEAN initiatives through the ASEAN-Australia Development Cooperation Programme (AADCP) which is now entering its second phase of implementation. The AADCP has also provided support to strengthening the ASEAN Secretariat as the main coordinator of the activities and initiatives in the region.

With the US, ASEAN has had long history of cooperation, covering areas under the political-security, economic and socio-cultural pillars of the ASEAN Community. Through the ASEAN Regional Forum (ARF), US-ASEAN Expanded Economic Engagement, US Agency for International Development (USAID), and ASEAN Connectivity through Trade and Investment (ACTI), the US has been instrumental in the development of the ASEAN Community. In economic terms, trade between US and ASEAN reached USD 212.8 billion, which constituted 9.3% of total foreign trade of ASEAN, making the US the fourth largest trading partner for ASEAN. The United Nations (UN) has also been an important partner for ASEAN by supporting efforts to maintain peace and stability, and to promote human rights’ protection.

Collectively, those partners have also been supporting ASEAN’s initiatives on connectivity to improve ASEAN’s global competitiveness, on combating terrorism and promoting peace and stability, on narrowing the development gap among the ten AMS, and on further enhancing the regional economic cooperation and partnership. With regard to connectivity, the Master Plan on ASEAN Connectivity (MPAC) 2025 serves to guide the implementation of measures to develop and integrate the physical infrastructure of ASEAN, connect the peoples of ASEAN, and synchronise the institutional framework in the region.

There are a few questions that remain in the minds of the stakeholders of ASEAN. First, how will all these commitments and agreements be translated into real actions and activities that the stakeholders can take advantage of? Development of the ASEAN Community Blueprint 2025 has taken into account the successes, failures and lessons from the implementation of the previous blueprint. The new blueprint provides more details and flexibility for each sector to implement their strategic measures to suit the different natures of each area to ensure compliance and completion, and therefore benefits for the stakeholders. In addition, particularly for the ASEAN Economic Community (AEC) pillar, the Blueprint 2025 is accompanied by a new mechanism for monitoring that will put a significant emphasis on the impacts of the measures, i.e. the enhanced scorecard will be an impact assessment report, not just a compliance report as it was for 2008-2015. Given that now ASEAN has stated that the new blueprint is more people-centred and people-oriented, it must be implemented and monitored in a different way that ensures real impacts to the peoples of ASEAN.

Secondly, since there have been many agreements and treaties negotiated and signed by ASEAN high ranked officials (mostly at Ministerial level), how will AMS transpose the ASEAN agreements into domestic or national laws? Unlike the European Union (EU) that closely monitors the transposition process and may impose a sanction when a member country is proven to have delayed a transposition of an EU directive, ASEAN’s process of transposing a regional agreement into national laws is voluntary. Absence of such transposition will prevent any intended outcomes or impacts from being realised. ASEAN may need to think about greater level of enforcement of regional agreements to bring about real meaningful results and benefits.

The third question is related to narrowing the development gap between the founding member states and the newer ones. ASEAN has received much support from external parties for to bring the newer member states to be on par with the rest. This is unavoidable since admission of a country to be an ASEAN member does not require that that country meet a certain set of criteria, unlike the admission of a country to join the EU. However, the gap still exists and this has forced ASEAN to adopt the ASEAN-X approach, which allows some member states, who are ready, to implement an initiative (that has been agreed by all ten AMS), and the others may join later when they are ready to do so. The gap and different levels of economic development has made it difficult for ASEAN as a group to move together to realise the ASEAN integration as a community. It is then imperative that ASEAN, particularly the newer member states, expedite and redouble the efforts to close the development gaps to ensure that the benefits of the integration is inclusive to all AMS.

Last but not least, the ASEAN integration process must take into account the roles of the stakeholders. In the case of the AEC, it’s the private sector that will play a role in making the AEC a success. How much the stakeholders will be involved in the decision making process remains to be seen. The ASEAN Business Advisory Council (BAC) has been an advocate for stronger participation by the private sector in the development of the AEC, particularly with regard to finance cooperation and SME development. ASEAN BAC regularly meets with the Leaders at the Summit and also has regular consultation with the ASEAN Economic Ministers to provide their feedbacks and recommendations. This process needs to be maintained and enhanced for better implementation of the AEC measures. In addition, many other private sector groups have included ASEAN in their overall strategies. Since the new blueprint clearly mentions the important role of the private sector and other stakeholders, ASEAN must continue to develop and implement an official and regular mechanism to promote greater involvement and participation of stakeholders in the ASEAN Community development process.