Let’s get real about ASEAN community 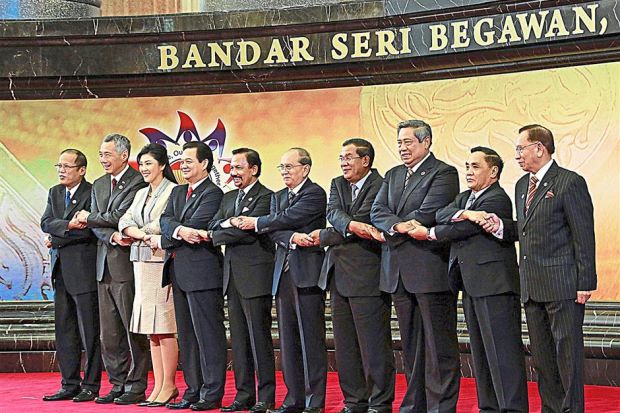 Like Rome, the Asean community is not going to be built in a day.

Community-building is a long road with many milestones.

Even when advanced, there can be reversals, as can be seen in nation-states, the most developed contemporary organisation of communities.

Every nation has been there. Its political and social cohesion has been challenged, some to the point of break-up, caused by resurgence of tribal, racial or religious differences, the introduction of historical antecedents that breaks down established boundaries and imposes new borders, the outbreak of violence, no law and order, destruction of communities of nation-states.

There are simply too many examples of this, just now and in the past, in our own country and without, for us to close our eyes to it. Even the European Union, often cited as the counterpoint to Asean community-building efforts, has seen many aspects of its organisational attributes and assumptions rolled back, reflecting once again the existential challenges of community-building.

The narrative, therefore, of Asean community-building has to be changed. It has been too definitive. This gives rise to expectations that will not be fulfilled, including even the purely quantitative targets, because the sense and understanding of the benefits of community-building had not preceded the rush to achieve some measurable programme of action.

Unless, in the messaging – which is now the official jargon of putting across to the people of Asean the advantages of operating as a community – there is a historical perspective and a qualitative appreciation of that social good, the regional organisation will struggle to make progress in the realisation of the Asean community. Forget about realising it at the end of 2015. Even in the foreseeable future it will not be attained.

It is often posited that, as an inter-governmental organisation without strong central authority of any kind, Asean will never become any kind of community. However, although it will be good if the Asean secretariat became better resourced and more effective, even without surrender of state sovereignty, inter-governmental relationships can still achieve common community purpose.

For example, it is recognised that among the United States, Canada, the UK, Australia and New Zealand, there is not likely to be war because of the close relationship they have and the common values they hold – despite each country being fully sovereign and not subsuming authority to a common whole. This security community, as it is called, holds true and holds fast.

For Asean, the diverse value systems, particularly political, do not make it easy to come to a common whole. The economic disparity among Asean members states is often cited as a main impediment, but the political value system is even more of a barrier.

Yet, it must be admitted, Asean has been able to find much common ground to move to common purpose towards common whole.

But it is not true a community will be formed even if all the objectives of the three pillars, economic, political-security and socio-cultural, are achieved – which in any case is not going to happen.

The more important ongoing task is to drive the qualitative messages that will be the foundation of a community. This is not an easy task, but without engagement with the people in all sectors and at all levels, it will not be successful.

Asean is about to embark on its next phase – A People-Centric Asean – which is somewhat cliched: Has it not always been the People’s Asean even as leaders talked about Peace and Prosperity? Who is it for if not the People?

When Malaysia takes over in 2015 as chair of Asean, it is important to give clarity to the community-building process, and to give understanding of what a community means.

And to think of a communication plan that reaches out to all the peoples of the region, particularly the young, who do not know the significance of 1967, and would not have spent any time on the rather stodgy Asean website which people of that earlier generation might have.

Of course, given the pre-defined three pillars of the Asean community, Malaysia would have to do some stock-taking. One of the region’s leading corporate leaders has suggested this must be done with respect to the economic pillar at the beginning of 2015 while also indicating what can be expected at the end of that year.

While there has to be a bash at it, even this is going to be a tricky task, as the removal of a tariff barrier does not mean a non-tariff one might not be introduced in its place in some member country or other.

And then, it is not easy to anticipate which country might seek exclusion or exemption from what is agreed according to plan.

There has also been pushback. What had previously been agreed to being deemed not possible to implement – yet.

At the end, the people will not come to enjoy the benefits of cheaper and better quality goods and services that come with economic integration.

They must be made to know what they are missing and why. We come back to truly reaching out to the people to let them know.

That communication plan is so critical.

This calls for a skillful plan of action by Malaysia for 2015 and beyond. It should defined in a more meaningful manner than the more numerically inclined AEC, APSC and ASCC what is the way forward.

The good for the community that comes from integrated efforts is not frequently readily evident. It has to be argued in the best test of truth being the ability of the idea to be accepted fashion.

People have to be truly convinced.

Their leaders are not always able to carry through what they may have agreed to in a distant regional capital.

When the people ask for it they may be more inclined to do so.

The Asean region, like the wider globe, has a constituency of people now more able and active to demand the public good.

This must be made to work for Asean community-building.