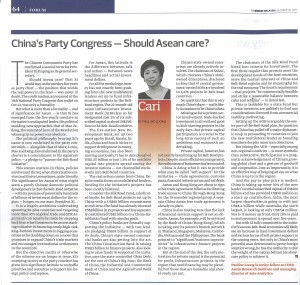 The Chinese Communist Party has confirmed a second term for President Xi Jinping as its General Secretary.

Should ASEAN care? That Xi would stay on for another five years as Party Chief – the position that wields the real power in the land – was never in doubt. The confirmation, announced at the 19th National Party Congress that ended on October 24th, was only a formality.

But what is more than a formality – and of significance for ASEAN – is that Xi has emerged from the five-yearly conclave as the nation’s undisputed leader. His political standing now approaches that of Mao Zedong, the venerated hero of the Revolution whose grip on power was absolute.

This stature matters. In China, policies survive (and thrive) when their creators survive (and thrive), sometimes, quite literally. The significance for ASEAN of what might seem a purely Chinese domestic political development is that the Belt-Road initiative – with its promise of potentially hundreds of billions of investment dollars for the region – hinges on one man: President Xi.

It is a hugely ambitious undertaking spanning 60-plus countries and targeting more than 30% of global trade and GDP. Arguments can equally be made for stepping back from what threatens to be an overreaching initiative in financing costly high-risk, long-horizon investments in lagging economies as for doubling down on a move that promises to expand China’s trade markets and encourages international settlements in the renminbi.

But the objective merits or otherwise of the scheme are no longer at issue. Xi’s sweeping victory at the party conclave has given him significant latitude to reshuffle priorities and resources to support his foreign policy centrepiece.

For ASEAN, this latitude is the difference between talk and action – between news headlines and actual investment dollars.

For all the media hype, money has not exactly been gushing from the new multilateral lenders set up to fund infrastructure projects in the Belt-Road region. The 22-month-old Asian Infrastructure Investment Bank (AAIB) has so far designated just 2% of its subscribed capital or about US$2 billion to the Belt-Road initiative.

The five-nation New Development Bank, set up two years ago by Brazil, Russia, India, China and South Africa to support development in emerging economies, has also been moving cautiously. It has to date ploughed US$1.55 billion or just 1.6% of its available capital into projects spread among the investor nations – not channelled exclusively into Belt-Road countries.

The real action comes from China. Despite media focus on multilateral lenders, funding for the initiative’s projects has been mostly bilateral.

Consider the Silk Road Fund, a dedicated lender for Belt-Road projects set up by China with a US$40 billion commitment at end-2014. The Fund has already invested US$6 billion in 15 projects and has separately contributed US$2 billion to a China-Kazakhstan fund with similar goals.

China’s policy banks are formally supporting the initiative – with two lenders pledging US$55 billion in support of its deals. China’s state-owned commercial banks are also getting into the act. The China Construction Bank is raising US$15 billion to finance projects. Also looking to raise funds in support of the initiative, says the state-controlled China Daily, are the rest of China’s Big Four: the Bank of China, the Industrial and Commercial Bank of China and the Agricultural Bank of China.

No question that this is very much China’s show – and is likely to continue to be China’s show.

Missing so far is private-sector involvement. State-backed investment is all well and good in kick starting projects in the early days. But private capital participation is crucial to the long-term success of such an ambitious and mammoth undertaking.

Private capital, however, has not exactly been lining up for Belt-Road projects. Despite much official encouragement, the enthusiasm of businesses has been muted.

China is doing what it can to provide what may be called “soft support” for the initiative – trade agreements, customs pacts, financial infrastructure, and aid deals.

China is also making sure that the lack of financial services support is not an obstacle. ASEAN, for example, will be serviced by the Bank of China (Hong Kong) which is taking over its parent’s branch network in Thailand, Singapore, Malaysia, Cambodia, Vietnam and the Philippines. The bank pointed to “significant business opportunities” in infrastructure finance projects in the region.

But at the end of the day, the only motivation for private capital is the potential for profit. Infrastructure projects in the region that need financing may be plentiful but those that are bankable and shovel-ready are not.

The chairman of the Silk Road Fund listed four criteria for investment. The first three require that projects meet the development needs of the host countries, serve the mutual interests of China and Belt-Road regions and be meaningful for the real economy. The fourth requirement – that projects “be commercially feasible and strike a reasonable balance between risks and returns” – is listed last.

This is laudable for a state fund but private investors are unlikely to find any considerations divorced from commercial viability motivating.

Setting up the AIIB is arguably the easier part of the Belt-Road plan. No question that China has pulled off a major diplomatic coup in persuading 57 countries to join the new multilateral lender as founding members despite American objections.

But joining the AIIB – especially among non-regional countries – is more symbolic than substantive. Participation is a pragmatic acknowledgement of China’s growing global clout and a gesture of goodwill and cooperation. Just as importantly, it is an effective way of keeping an eye on what China is up to in the region.

And the pay-to-play price is modest. China is taking up some 30% of the new lender’s initial subscribed capital of US$100 billion and has provided US$50 million as a start-up contribution. India, the next largest shareholder, is going in with just US$8.4 billion while Australia, the sixth largest, is looking at only US$734 million. Nor is it money up front. Only 20% is paid in and payment is spread over five years.

But with Xi fully committed to the initiative’s success, Belt-Road economies will likely see an increase in hard investment dollars and various forms of soft project support in the coming years. Not only is China’s most powerful man determined to prove foreign sceptics wrong, he has the authority to put the weight of the nation behind his showcase policy to achieve it.