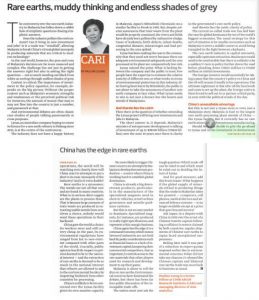 The controversy over the rare earths industry in Malaysia seems to have fallen down a rabbit hole of simplistic questions chasing simplistic answers.

Does the industry pollute the environment – or not? Can it bring in new investment and jobs – or not? Is it a trade war “windfall”, allowing Malaysia to break China’s virtual global monopoly in producing minerals critical to modern technology – or not?

In the real world, however, the pros and cons of the decision facing Malaysia are far more nuanced and complex. The challenge is not just in getting the answers right but getting the questions right – not so much weeding out black from white as sorting through endless combinations of shades of grey.

Context is critical. The importance of investment to the policy equation, for example, depends on the bigger picture. Without the proper context, such as Malaysia’s economic strengths and weaknesses or the perceived political risk for investors, the amount of money that might or might not flow into the country is just a number, and guesswork at that.

Lynas, an Australian company hoping to renew the license for a rare-earths refining facility it operated in Pahang state since 2012, is at the centre of the controversy.

The industry does not have a happy history in Malaysia. Japan’s Mitsubishi Chemicals ran a similar facility in Perak in 1982. Despite solemn assurances at the time that toxic waste from the plant would be properly contained, radioactive sludge polluted fields and rivers. Leukemia, birth defects, infant deaths, congenital diseases, miscarriages and lead poisoning in the area spiked.

Lynas has been making the case to the community that it need not worry because there are adequate environmental safeguards and the ores processed at its plant are comparatively low risk.

Lynas has missed the point. What is lacking between the company and the public is trust. Few people have the expertise to evaluate the relative toxicity of different ores or what works in terms of environmental protection in this industry. And having been burnt by Mitsubishi, the public is not about to take at face value the assurances of another rare earths company. What Lynas needs to win is not just a license but hearts and minds in Malaysia.

And therein lies the catch

Then there is the question of whether extending the Lynas project will bring new investments and jobs to Malaysia.

The short answer is: It depends. Malaysia’s Entrepreneurial Development Minister is talking of investment of up to RM100 billion (US$24 billion) over the next 10 years once there is clarity about the government’s rare earths policy.

The current, so-called trade war has laid bare the race for global dominance by the world’s two biggest economies. The usual strategy for this sort of situation is for smaller economies, such as Malaysia, to steer a middle course to avoid being trampled in the fight between elephants.

The rare earths industry is capital intensive – especially upstream extraction. Businesses would need to be comfortable that there is unlikely to be a sudden U-turn in policy further down the road before plonking down US$15-50 million in initial investments.

The foreign investor would essentially be taking a punt that Malaysia’s policy on China and the United States will remain friendly to his operations. The ultimate nightmare is that after all the hard work and cost in setting up the plant, the foreign entity is then forced to sell out to or partner with a third party more in sync with the political winds of the day.

But this is not just a Lynas story or even just a Malaysian story. Malaysia hosts the largest rare earths processing plant outside of China – the Lynas facility. But it currently has no rare earth mines and no downstream manufacturing.

Should Malaysia decide to give the go-ahead to Lynas and invite investment in downstream operations, the world will be watching very closely. How will China react to attempts to put a dent in its near-monopoly of the industry? And is it even doable?

Rare earths is a misnomer. The metals aren’t all that rare and are found in many countries. What is in serious short supply are the plants to process them. That is because large amounts of toxic waste are produced in extracting usable metals from ores dug out of the ground. Given a choice, nobody would want these operations in their backyard.

China gave the world a choice.

Its workers were and still are very cheap. In the past, its environmental regulations have ranged from lax to non-existent compared with many other parts of the world. Crucially, public opinion has little impact on policies deemed to be in the national interest – and rare earths extraction is deemed to be so much in the national interest that refiners are allowed to add to the environmental burden by importing feedstock from other countries for processing.

China is unlikely to be too concerned over the Lynas facility given its own massive capacity.

Far more likely to trigger Chinese concern are any attempts by Malaysia to develop downstream production – a sector where China is working hard to establish global dominance.

The Chinese are already a big downstream producer, particularly in the manufacture of the specialised magnets used in electric vehicles, wind turbine generators and missile-guidance systems.

But this is not an easy market to dominate. Specialised magnets, for instance, are produced to really tight specifications and is a thin-margin business.

China again has the edge. It is a command economy, which means favoured industries are not held back by pesky considerations such as financial losses or lack of investment capital that hamper their commercial competitors. Just as important, it controls access to the raw materials other players need for research and development to up their game.

Malaysia is about to roll the dice on rare earths. Environmental concerns have dominated the debate, but there has been far less public discussion of the inescapable trade-offs.

The nation must now ask the tough question: which trade-offs can be ruled in and which must be ruled out in deciding the future of Lynas.

And for good measure add in this brain teaser: what happens if the global supply of minerals critical to producing things that the modern Malaysian takes for granted – computers and cell phones and medical devices and advanced defence systems – are no longer available except at a price that goes beyond money?

Ask Japan. In a dispute with China in 2010 over the arrest of a Chinese trawler captain following a collision in waters claimed by both countries, regular shipments of Chinese rare earths to Japan faced unexplained suspensions. Beijing later said it was part of a reduction in export quotas imposed earlier due to environmental concerns. Tokyo did not take any chances. It released the Chinese captain and bilateral rare earths trade was soon back to business as usual.