Malaysia: Dusting off the old playbook for SST 2.0

Dusting off the old playbook for SST 2.0 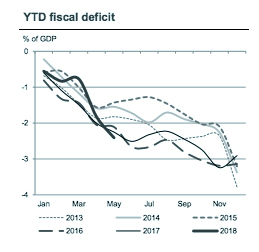 SST 2.0 borrows heavily from previous SST regime
The Sales and Services Tax (SST) will make a comeback on 1 September 2018 in a familiar fashion, with proposed rates of 5% and 10% for the Sales Tax, and 6% for the Service Tax – similar to the previous SST regime that was retired after 2015. While a separate tax schedule will be released later for petroleum and petroleum products, specific provisions were not made for tobacco and liquor, which incurred sales tax rates of 25% and 20% respectively under the SST 1.0, implying either the tax rate has not been finalised or a standard-rated sales tax of 10% applies. The new SST bill will be tabled soon and is expected to be passed before the end of the current parliamentary session in mid August. SST 2.0, alongside the GST zerorisation on 1 June, brings one of the new government’s core election promises closer to realisation.

Tweaks to improve efficiency of SST and minimise profiteering
We understand that improvements are being considered to the new SST Bill to address criticisms of the old SST like double taxation, incomplete tax relief for exports outside designated/special areas, and efficiency of collection. The Royal Malaysia Customs Department (RMCD) is also in consultation with the Finance Ministry and the Domestic Trade and Consumer Affairs Ministry to monitor and prevent unjustified profiteering during the SST 2.0 implementation.

Fulfilling pro-consumer election promise
Households are the clear winners in this trade-off, receiving additional disposable income through reduced tax collection. While goods without exemptions such as passenger vehicles, selected building materials, processed F&B and services (Fig 4) are poised for price increases after the GST tax holiday, SST 2.0 covers a narrower basket of goods and services (38% of CPI basket vs. 60% under the GST as cited by Finance Minister Lim Guan Eng), curtailing the inflationary impact to consumers. We retain our inflation forecast of 1.3% in 2018, which already assumes the reintroduction of the SST.

Lower administrative and compliance burden on businesses
SST 2.0 and the proposed abolishment of the GST Act relieves many businesses from the onerous reporting requirements, with the RMCD estimating that less than 100,000 businesses will be affected by SST 2.0 vs. 472,000 under GST. FM Lim contends that delayed GST refunds had tied up operating cash flows and raised costs for businesses. RMCD plans to help reduce administrative burden via automatic registration of eligible businesses (annual turnover >RM500,000) and digitising submissions of SST returns. RMCD will begin nationwide engagement with stakeholders on SST 2.0 from 23 July.

Government to tighten belt after picking up the tab
The government expects to collect RM21bn p.a. from the SST, vs. RM44bn p.a. under the GST regime estimated in Budget 2018 before it was abolished on 1 June, leaving a shortfall of RM23bn p.a. (~1.6% of GDP). While higher oil-related revenues provide a fortuitous temporary buffer, maintaining fiscal discipline hinges on the new government’s ability to rapidly rationalise unproductive expenditures and reduce revenue leakages. Alongside these fiscal reforms, we believe a comprehensive tax reform over the medium term, which helps simplify tax structures and broaden the tax base, is equally critical to ensuring fiscal and debt sustainability. 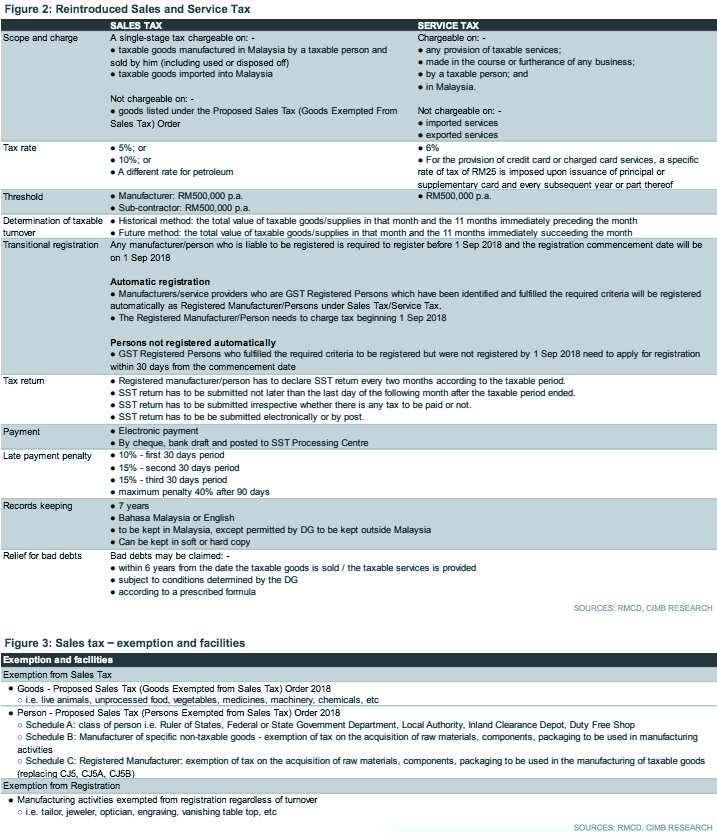 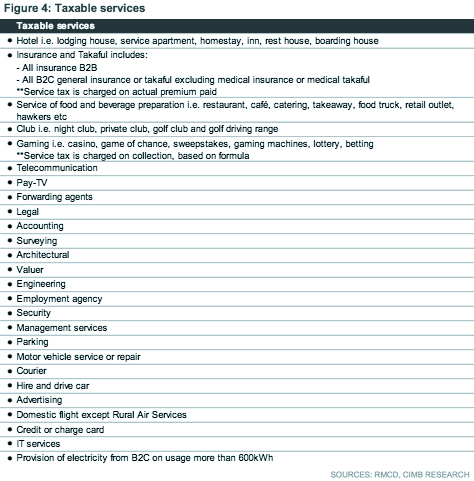 Originally published by CIMB Research and Economics on 20 July 2018.