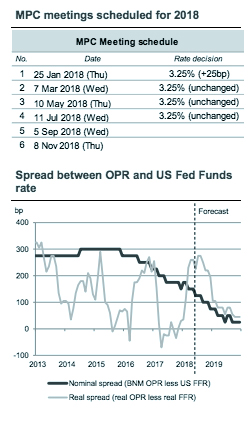 OPR left unchanged at 3.25%
The Monetary Policy Committee (MPC), chaired by new Bank Negara Malaysia (BNM) Governor Datuk Nor Shamsiah Mohd Yunus, extended the pause in Overnight Policy Rate (OPR), which remained at 3.25% for the third straight meeting. The decision was well anticipated by us and all analysts surveyed by Bloomberg.

Policy continuity under new Governor
It was a homecoming for the new Governor who will serve a term of five years until 30 Jun 2023 as she was previously the BNM Deputy Governor responsible for areas including banking, insurance, and Takaful supervision, financial intelligence and enforcement until her departure in November 2016. She signalled no dramatic departures from the monetary policy stance pursued by predecessor Tan Sri Muhammad Ibrahim.

Slight caution on growth outlook from external risks
BNM maintained its assessment of Malaysia’s economic outlook for 2018, following the raft of policy reforms introduced by the new Pakatan Harapan government. BNM expects Malaysia to remain on a steady growth path (CIMB: +5.2% yoy in 2018F), which will be further supported when the government provides greater certainty in domestic policy in the coming months. The MPC statement reflected the central bank’s view that economic and financial conditions remain supportive in the post-election environment. Nonetheless, BNM cautioned against downside external risks, particularly the escalating trade tensions and ongoing monetary policy normalisation.

… creates policy space to keep the OPR on hold
Regionally, interest rate cycles are turning positive to keep up with the US Federal Reserve’s policy rate hikes. Despite narrowing nominal policy rate spreads, the slowdown in Malaysia’s short-term inflation outlook has increased the real spread between the OPR and US Fed Funds rate, allowing BNM to keep policy rates accommodative until next year, in our view. While OPR cuts are an option, it would mean swimming against the tide of regional central banks and potential spillovers to the currency, unless the GDP growth and inflation outlooks deteriorate more sharply. We expect BNM to tread with caution and reiterate our end-2018 OPR forecast of 3.25%, implying no further hikes this year, with the next OPR hike anticipated in 2H19F. 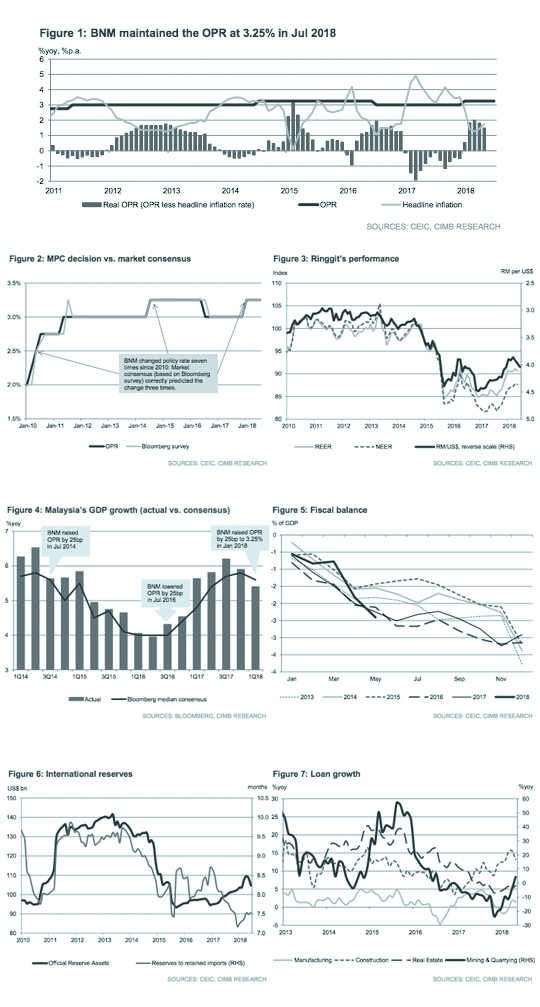 Originally published by CIMB Research and Economics on 11 July 2018.