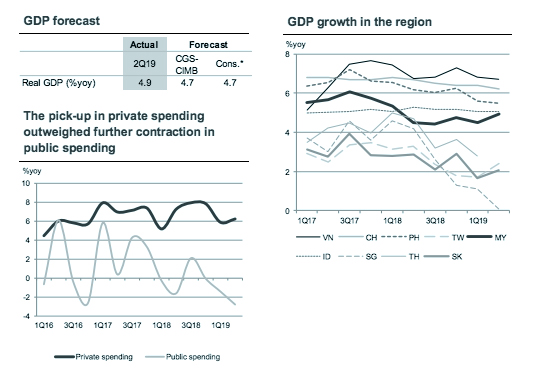 Household spending sustained by purchasing power improvements
Income growth, muted inflation and cash handouts ahead of the festive season supported household purchasing power, which drove private consumption (+7.8% yoy in 2Q19 vs. +7.6% yoy in 1Q19). In contrast, public consumption (+0.3% yoy vs. +6.3% yoy in 1Q19) turned more subdued amid front-loaded spending in 1Q19 and a higher base last year ahead of the elections. Meanwhile, the contraction in investments narrowed to 0.6% yoy in 2Q19 (-3.5% yoy in 1Q19), amid improvements in the residential property segment with the launch of the Home Ownership Campaign (HOC) and ICT-related capex on machinery and equipment.

Despite CA surplus, financial outflows weighed on BOP
The current account (CA) surplus remained sizeable at RM14.3bn or 3.8% of GDP in 2Q19 (RM16.4bn or 4.5% of GDP in 1Q19), as a narrower surplus on goods and services was partly compensated by a smaller primary income deficit amid higher income receipts from investments abroad. The CA surplus was insufficient to offset higher net outflows in the financial account (-RM18.6bn in 2Q19 vs. -RM13.8bn in 1Q19), due to higher direct investments abroad by Malaysian companies as well as non-resident portfolio outflows. As a result, the balance of payments dipped into the red (-RM1.4bn in 2Q19 vs. +RM5.5bn in 1Q19).

Growth outlook for 2019 remains intact at 4.7%
Malaysia’s growth trajectory has shown relatively more resilience than regional peers despite exposure to volatile external conditions, partly due to the strength of household incomes and consumption, materialisation of foreign direct investments as well as a recovery in agriculture and mining output. We believe these drivers will continue to hold the fort for the rest of the year, and maintain our 2019F GDP growth forecast at 4.7%. However, as the one-off commodity supply revival fades into next year and trade headwinds intensify, we project Malaysia’s economic growth to moderate to 4.4% in 2020F. To stave off downside risks to the economy, we expect the government to enact a mildly expansionary Budget 2020 as well as monetary support from BNM in the form of a further OPR cut by end 2019. 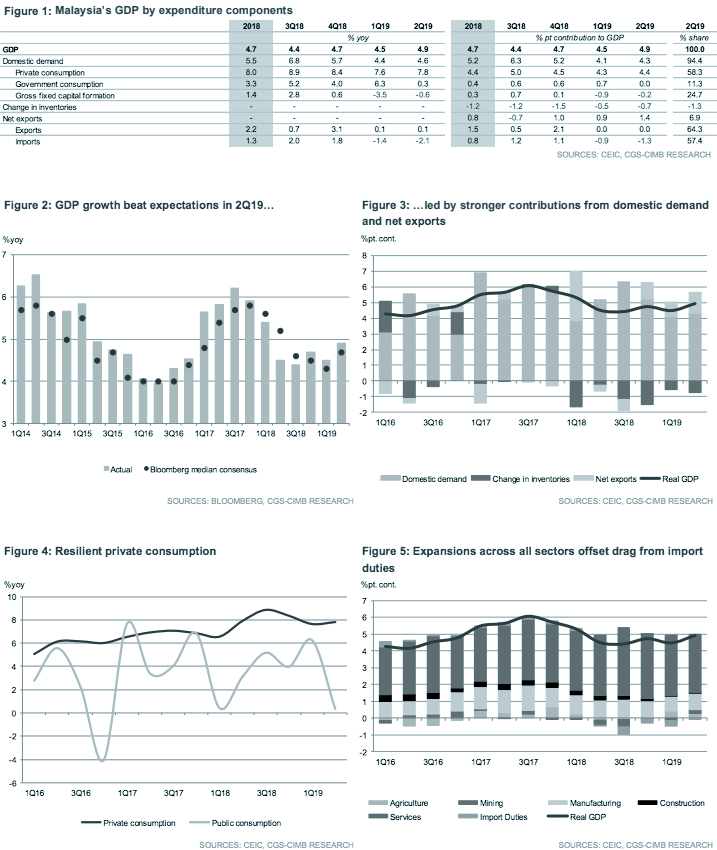 Originally published by CIMB Research and Economics on 16 August 2019.