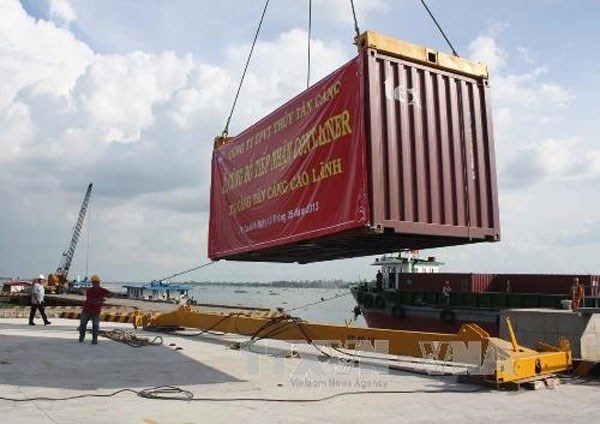 Mekong Delta Ports requires better connectivity to enhance efficiency
(14 October 2018) River and sea ports in the Mekong Delta system of Group 6 ports are capable of handling a large volume of goods, but according to the Vietnamese News Agency (VNA), 70% of goods in the Mekong region are still being transported by road to Ho Chi Minh City. According to the Vietnam Maritime Administration, about 85 million tonnes of goods are being docked at ports in the Mekong every year but these seaports only handle 20-25% of the total cargo shipped by sea in the region, and the remaining is sent to ports in Southeastern Mekong. The Planning and Investment Department in Vietnam’s Ministry of Transport’s believed that this is happening due to inefficiency and poor management of the subsisting ports. Data provided by VNA showed that transportation of goods through Cai Cui, Hoang Dieu and Tra Noc ports in Can Tho city reached 2.11 million tonnes in 2015, 1.04 million tonnes in 2017, and 0.54 million tonnes in the first three months of 2018. Vietnam’s Minister of Transport Nguyen Van The stated that the planned logistics centre at Cai Cui port in Can Tho city should act as a key logistics centre in the delta and an international trading and transhipment hub in the Mekong Delta. VNA in its report stated that preferential policies on charges are needed to boost container ships to carry goods directly to Mekong Delta ports.
Read more>>

Vietnamese Prime Minister urges Austrian businesses to invest in Vietnam
(16 October 2018) Vietnamese Prime Minister Nguyen Xuan Phuc encouraged Austrian companies to invest in Vietnam during the Vietnam-Austria Business Forum in Vienna on 15 October 2018. He said there is investment potential in the high-tech agriculture, processing and manufacturing industries, high-tech zones, infrastructure development and tourism. Furthermore, the Prime Minister provided assurance that Vietnam would create optimal conditions for Austrian investors to buy equity in State-owned enterprises. He further cited the various factors that would render Vietnam as an attractive investment destination: a large market with a population of almost 100 million; predominantly young workforce, rising middle class and the increasing number of internet and smartphone users. He said economic conditions are also favourable and that Vietnam’s GDP is projected to increase by about 7% in 2018. He also said that trade turnover between Vietnam and Austria is expected to reach approximately US$4.5 billion in 2018 though two-way capital flows worth US$200 million, were average in value.
Read more>>

Myanmar’s trade deficit from April to September 2018 narrows by US$1.3 billion compared to 2017
(15 October 2018) According to Myanmar’s Ministry of Commerce (MOC), Myanmar’s total trade volume between April and September 2018 was US$18 billion which was an excess of US$2 billion compared to the same period in 2017. Data provided by the MOC indicated that exports totalled US$8.5 billion within the same duration, which is less than imports worth US$9.8 billion. The resultant trade deficit of US$1.3 billion was lower than the trade deficit of US$1.8 billion in the same period in 2017. The manufacturing sector was the highest contributor of Myanmar’s exports while international demand for agriculture and mineral products has also helped improve export income. According to the Myanmar Department of Trade Director-General U Yan Naing Tun, businesses would need to import the necessary equipment and materials as part of Myanmar’s push to promote investment opportunities for foreign investors, thus creating the trade deficit.
Read more>>

Thailand’s commerce attachés around the globe told to prepare for trade war
(16 October 2018) Thailand’s Commerce Minister Sontirat Sontijirawong has alerted the commerce attachés in 64 countries to prepare for the global trade war which is expected to intensify in 2019. Sontirat said that as a result of this development, there could be benefits for Thailand such as an increase in inward foreign investments and exports. He urged the attaches to adapt to the repercussions of the trade war for example, by promoting local products in the global market. Thailand’s Commerce Ministry expects exports to increase by 8% in 2018. Its data showed that Thai exports reached US$169 billion in the first eight months of 2018, a 10% increase compared to the same period in 2017.
Read more>>

Thai exporters improve usage of FTAs and GSPs by 10% in 2018
(17 October 2018) Thai exporters are better utilising the free trade agreement (FTA) privileges and the Generalized System of Preferences (GSP), with Thailand’s Commerce Ministry expecting utilization of the schemes to reach US$70.8 billion by the end of 2018, up 10% from 2017. Thailand’s Foreign Trade Department Director-General Adul Chotinisakorn said that Thai exporter’s usage of FTAs and GSP privileges reached US$49.9 billion in the first eight months of 2018, an increase of 19.1% compared to the same period in 2017. The highest volume of FTA use came from the ASEAN FTA, which recorded exports worth US$17.85 billion.
Read more>>